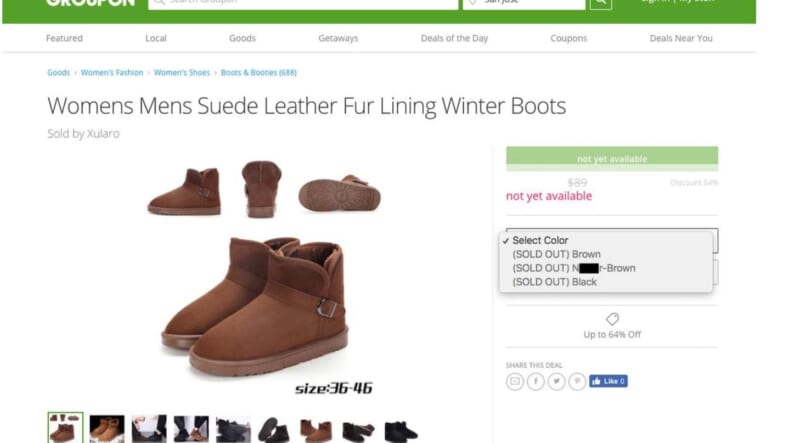 Brace yourselves for this one…

Groupon is in hot water after users noticed the company was advertising boots described as “N****r brown” on their uber-popular site on Wednesday.

The company featured not one but TWO third-party sellers (Kojwa and Margines) that described their boots’ color options as “n****r brown.”

The company issued a lame apology only after users started complaining about the slur on social media.

I can’t believe @Groupon has a woman’s boot called “Nigger-Brown”. What type of color exactly is “Nigger-Brown”? Groupon has some explaining to do. #ShutdownGroupon pic.twitter.com/X2viGvmtMJ

“We are appalled that this language was displayed on our site,” a Groupon spokesperson said in a statement. “This product description was provided by a third-party seller via our self-service platform. Regardless, this is completely unacceptable and violates our policies — to say nothing of our values.”

“When made aware of the issue, we immediately removed the deal — as well as the third-party seller — from our marketplace. Language like this has no place on Groupon, and we’re further strengthening our self-service controls to ensure it doesn’t happen again.”

Ummmm….clearly “language like this” has several places on Groupon. Even though it would be hard to believe an oversight of this magnitude is possible, it’s insane to accept that they missed such a disgusting display of racism twice, if not more. Cosmopolitan reports that even more retailers used the slur in their descriptions of products.

“[Kojwa and Margines] are separate companies,” a Groupon spokesperson told Cosmo.  “This is a known issue in the e-commerce space…We’re determining why the deal slipped past the controls we have in place (we flag literally hundreds of terms and various permutations) and will make the necessary improvements.”

We aren’t the only ones who aren’t buying the BS apology from the site that recently named Tiffany Haddish as a spokesperson. Several folks are calling for a boycott and operation #ShutdownGroupon is in full effect with the hashtag trending on Twitter.

So far, Tiffany Haddish has not commented on the controversy…we’ll wait.