The actress reveals how her mom taught her to love her complexion. 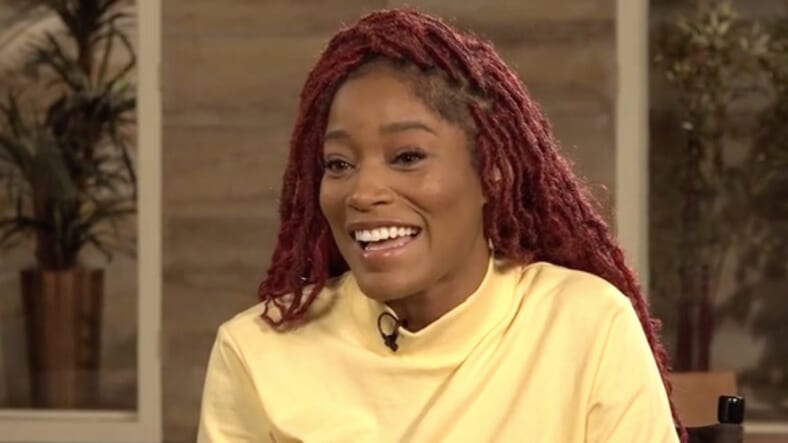 Keke Palmer is as outspoken as she is talented and the actress/singer opened up to TheGrio about learning to love her look in an exclusive interview.

The 24-year-old who currently lights up the small screen as Gigi on FOX’s STAR has been in the spotlight since she burst onto the scene in 2006’s Akeelah and The Bee at the age of 12 and she admits the years she spent limelight took a toll on her self esteem.

The gorgeous girl who stole America’s heart as a child is now a grown woman who loves her look and that has a lot to do with values her mother instilled in her as a child.

“My mother was very encouraging to me as a little girl. I would get teased in school for being the only black girl in my class. They would make fun of my hair and the way that I talked. Sometimes I would be sad,” she explains. “My mom always made me feel proud of who I am because everyone is beautiful in their own way and that was important to me and still is.”

The actress who stays booked says her time in Tinseltown has taught her some hard truths.

“Hollywood highlighted some barriers when it comes to colorism. Growing up, I didn’t see people with my complexion at the forefront or being shown as beautiful. I only saw one representation of beauty and that was of a black person with a lighter complexion. I had all these questions and as I got older, I realized there was a huge disconnect as far as corporate views of what beautiful is and it’s very old, traditional, and based off of one kind of person’s perspective,” she says. “This is why little girl like me growing up wasn’t beautiful to other people. This is a different time and we are able to show that this is what the world looks like today. Still, there are magazines who won’t put me on their cover.”

Although representations of black women are showing up in more spaces, Keke admits there’s still more work to be done.

“The industry can be very political. I think there’s a really odd concept that white people don’t want to go to the movies and see Black people and that’s just not true. We haven’t had people in positions of power who are able to represent us,” she explains. “Just because you are the same color doesn’t mean you share the same culture. When you look at the success of projects like The Chi, it shows so many different types of Black people. Now we’re getting to the time where younger kids are growing up and seeing themselves so much more and they don’t want to see the same one-note stuff or the same kind of people.”

Now that Keke Palmer is a grown woman with so many accolades under her belt, she’s a lot more confident in her own skin and she’s not afraid to speak out on tough issues ranging from racism to poverty to gun violence to mental health.

“What makes me feel empowered is speaking up for myself and having my own back. Taking care of me and showing up for myself really empowers me. At the end of the day, you’re not going to always have your mom, dad, sister brother, or wife or those people or things that make you feel like you. When you’re able to care about that relationship with yourself to make you feel the best, you feel empowered because you know how much you love yourself,” she says.

Although the pressure to be a role model has been troublesome at times, Keke’s mission to inspire is crystal clear.

“I have definitely felt pressure throughout my entire career to be a role model. You’re never going to be perfect but I felt it was my responsibility to show what I was capable of because it would allow young girls to believe in themselves. If you never see a Keke Palmer, it may be hard to know you can do what Keke Palmer is doing and go beyond it. Because I had Queen Latifah and Oprah Winfrey and Brandy and Aaliyah to look at, it let me know that it was possible,” she continues. “It has been very important to me to make sure people see me following my dreams and they can do the same. When I was younger, it may have stifled me because the pressure of being what other people need to see to be inspired can be very heavy because you’re still trying to figure yourself out so I had to let a lot of that go. I’m not gonna say I’m a perfect person, but I have a lot of light to share. I’m supposed to use my position to help people see their own light and inspire them to be their very best.”

You can catch Keke Palmer sprinkling her #BlackGirlMagic all over STAR on Wednesday at 9/8c on FOX.