The actress will return to the small screen when 'STAR' premieres tonight on FOX. 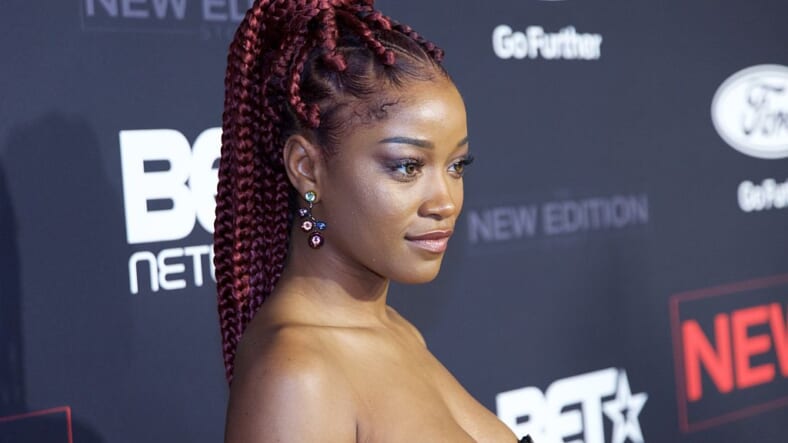 Earlier this week, Bow Wow shared some sobering tweets on social media that suggested he was struggling with suicidal thoughts and Keke Palmer is not having any of it.

“Sometimes i wish i wasnt here……..,” he posted on Twitter.

Sometimes i REALLY wish i never existed… i can never do SHIT RIGHT EVEN WHEN IM DOING RIGHT! Im better off …..

“Sometimes i REALLY wish i never existed… i can never do SHIT RIGHT EVEN WHEN IM DOING RIGHT! Im better off …..”

Sometimes i wish i wasnt here……..

Today, he continued to post troubling messages on social media and when fans started showing their support to the rapper and actor, he continued to refuse to accept the compliments and insisted that most people hate him.

I dont believe in love from people no more. I just dont. I think its fake. Its all fake. Im hated more than loved. So i accept it. Its cool. Ill be the bad guy. https://t.co/GgjlY5qBKH

With so much weight on it its hard to keep it up. Millions of dollars dont mean shit. It causes more drama and more responsibility KNOW THAT https://t.co/CudA1Yl7dQ

Wher MY FANS be at when niggas be chopping me up and the media go in on me? Fucking w every little thing i do? I dont see nobody defending bow. Aint no army for bow. But you love me right? Yeaah ok.. im this goat right? Yeah ok https://t.co/FkYoOL2dsY

Not far. Because my mind telling me i wont see 35 … my whole life i been paranoid like someone out to get me. Which is crazy. I used to think id die in la when i was younger because of big and pac. I use to be terrified as a child. Crazy thoughts https://t.co/jf6j9cNhut

Its anger. Its what yall turned me into. The media. The bloggers. The people. This is what yall wanted. I was the red and blue spiderman. Now im the all black spider man. ? https://t.co/siYpxzQmOz

Keke Palmer shared a heartfelt tribute to Bow Wow on Instagram hours after she spoke exclusively to TheGrio about how his recent comments made her feel.

“He gets bullied a lot online,” she says of Bow Wow. “He’s bullied by millions of people at least three times a month off of stuff that’s normal and people will literally berate him. The reality is, Bow Wow had platinum records at age 11 or 12. Bow Wow had movies he was producing at 13 and 14. Bow Wow has done more than people will ever do in their entire life and did it by the age of 18. OK?”

The actress who is starring in the current season of STAR knows a thing or two about fame and being bullied. She took time to share her support for Bow Wow during our exclusive interview and explained that social media can be a scary place for a celebrity.

“I just wanted to take the time out to appreciate Bow Wow for the cultural inspiration he’s been since I was about 5/6 yrs old(I’m about to be 25 ?). I will never forget the first Bow Wow video I saw, I’m pretty sure he was the first guy I ever loved #deadass haha. I followed him on to his movies, cause y’all know everrryyy body wanted to be like MIKE hahaha and his adult music career. Even though he had already accomplished more than most adults by the age of like 13 or 14. When I did my research and understood how he was the brand behind the Scream Tours I knew that he was more than just a talent but also about his peers and a business man. And after being a child in this industry as well I also look at him and know how much work it took and the discipline he had to put in at such a young age to create such a lane for himself that so many tried to duplicate. As a black American boy loved by all and still dope! There hasn’t and can’t be another Bow Wow. His brand has evolved over years and he still has managed to remain relevant for two decades and then some. I know how hard it is in the industry, starting off as a child and trying to still understand the world around you as you grow in some what of a bubble. So I am proud to see a healthy Bow Wow still doing his thing in multiple areas, having sacrificed so much. I applaud you and show you gratitude for it all. “When I was eight I was rhyming not backyard game playing.” AYEEEE!!! ????????,” she posted.