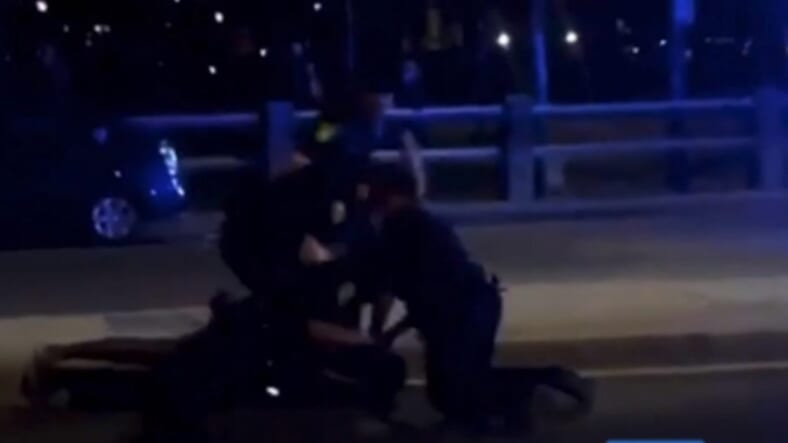 A Black Harvard University student can be seen being brutally beaten by Cambridge police in a shocking video that has now gone viral.

In the seven-minute video, the student, 21-year-old Selorm Ohene, is being held down as officers strike him repeatedly, according to the Boston Globe.

The city’s Mayor Marc C. McGovern responded swiftly in a statement Sunday morning saying: “Cambridge affirms that Black Lives Matter, but it must be true in practice as well.”

“What is shown on the video is disturbing,” McGovern said. “When confrontations cannot be averted and include the use of physical force, we must be willing to review our actions to ensure that our police officers are providing the highest level of safety for all.”

He vows to get to the bottom of the incident and said that the department would have full transparency by releasing the findings of the internal probe to the public.

According to the Globe, the student was apparently naked and started walking toward three officers who responded to a 911 call.

Bystanders said police then used excessive force to get Ohene under control by knocking him down.

The police strike him a number of times while on the ground.

—Woman sues R. Kelly for giving her an STD when she was a teenager—

The 21-year-old was later charged with exposure, disorderly conduct, assault, resisting arrest, and assault and battery on ambulance personnel, according to The Globe. A police report says Ohene was struck five times in the torso. He was taken to a local hospital after spitting up blood. Two officers were treated as well for minor injuries.

The Harvard Black Law Students Association released a statement after the assault by Cambridge police officers.

According to the statement from the Harvard Black Law Students Association, students are calling for the Cambridge officers to be fired for failing to act appropriately to help a Harvard student that appeared to be suffering from a mental health crisis.

Part of the statement described the brutal attack:

“A naked, unarmed Black man stood still on the median at the center of Massachusetts Avenue across from Harvard-Epworth United Methodist Church. He was surrounded by at least four Cambridge Police Department (CPD) officers who, without provocation, lunged at him, tackled him and pinned him to the ground. While on the ground, at least one officer repeatedly punched the student in his torso as he screamed for help. The officers held him to the ground until paramedics arrived, placed him on a stretcher, and put him in the ambulance. A pool of blood remained on the pavement as the ambulance departed.”

“The Bost and Cambridge Police Departments are no different than those in the rest of the country. Accordign to the ACLU, 63% of police stops in Boston between 2007 and 2010 targeted Black residents, even though Black residents make up less than 25% of the population. As of 2015, the Boston Police Department (BPD) had spent approximately $36 million to settle lawsuits, most of which were tied to wrongful convictions and police misconduct.”

The group of students are demanding action be taken immediately:

“We demand that he officers who assaulted this man while wss naked, fully subdued and bleeding on the ground be fired without paid leave.

We demand that Harvard University create an internal crisis response team to support students, faculty, and staff that doesn not involve CPD.”

They are also calling from the CPD to “radically alter their protocols for response to community crisis and policies around use of force.”