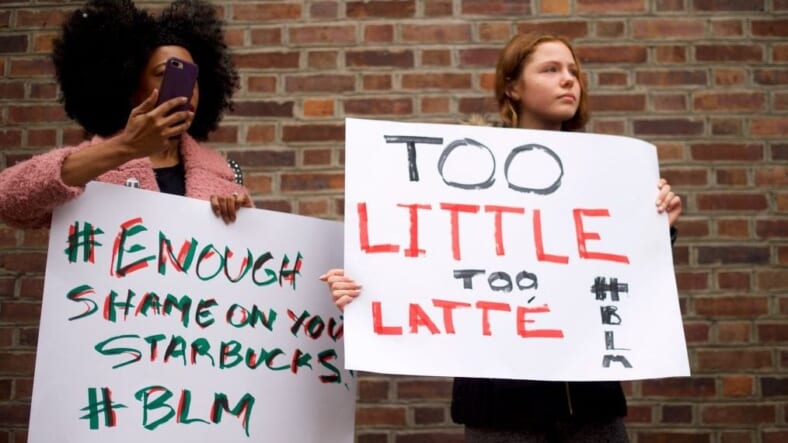 PHILADELPHIA, PA - APRIL 15: Protestors, mother and step-daughter, Donn T (L) and Soren Mcclay, 14, (R) demonstrate outside a Center City Starbucks on April 15, 2018 in Philadelphia, Pennsylvania.Police arrested two black men who were waiting inside the Center City Starbucks which prompted an apology from the company's CEO. (Photo by Mark Makela/Getty Images)

The CEO of Starbucks Kevin Johnson is on the ground in the City of Brotherly Love after two black men were shown no love and locked up by Philadelphia police for simply sitting in the coffeehouse while waiting for a friend.

A viral video that shows the unnamed men being handcuffed and ushered out of Starbucks started a firestorm on social media, with many questioning why an employee called the cops on the men for doing something so many white people do daily.

CEO Kevin Johnson appeared on Good Morning America today and did not mince words about what happened. He issued a straight-forward apology.

“First of all, I’ll say the circumstances surrounding the incident and outcome in our store on Thursday were reprehensible and wrong, and for that I personally apologize to the two gentleman who visited our store,” he told anchor Robin Roberts.

He said that different regions where Starbucks stores operate implement different guidelines for when to call police, and that’s part of what led to this case. He maintained that it was still “completely inappropriate” to get police involved.

“If there were threats or a disturbance, those might be appropriate times. In this case, none of that occurred. It was completely inappropriate to engage police,” he said. “What happened to those two gentleman was wrong.”

Over the weekend, Black Lives Matter took up the cause and protestors lined the streets outside the Starbucks, calling for the firing of that employee.

Protesters have taken their protest inside the store today.

Activists say the apology didn’t go further enough. For one, the CEO never named the men in his apology and he didn’t commit to firing the employee who racially profiled the two young men and called the police.

The woman who recorded the video says clearly the men were clearly targeted because of their race.

To make matters worse, Philadelphia’s Black police commissioner didn’t help the situation but instead jumped in the fray to say that his cops actions of locking up the men for sitting peacefully, were justified.

“As an African American male, I am very aware of implicit bias.” Police Commissioner Richard Ross. He added the department is “committed to fair and unbiased policing.” But, he said, people who “think logically” should recognize that when a business calls and says, “There is someone here I do not want,” officers have a right to act.

Robin Roberts asked Kevin Johnson if he believed the incident was a case of racial bias.

“It is my responsibility to ensure that we review everything … we review and invest in the training that is necessary. We will hold ourselves accountable.”