What should be his Avenger name? 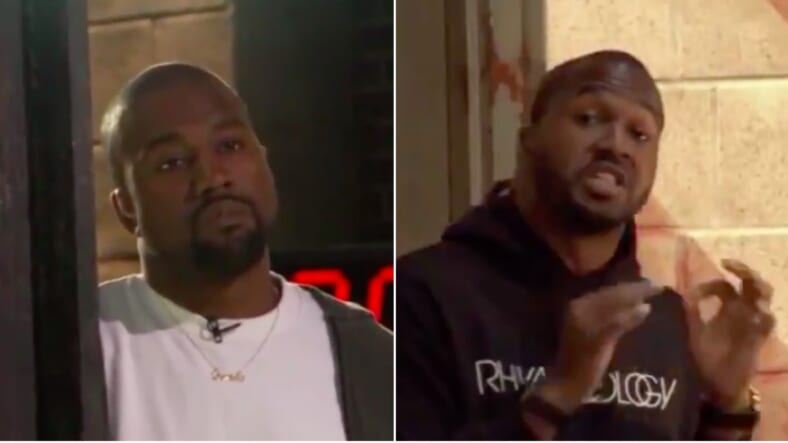 Ever since Kanye fired up his Twitter fingers again and doubled down on his MAGA madness, we have all been giving Ye a collective side-eye and hoping someone in his circle could talk some sense into the man.

Kanye’s celeb friends have definitely tried (he posted screenshot evidence of that), but out of left-field, a known face (but not quite a celebrity) is the one who said everything we’ve been wanting to say to Ye.

Kanye went on TMZ Live yesterday and did what we have come to expect now–a rambling interview with plenty of WTF moments. One of the most eyebrow-raising comments from Kanye was when he said slavery was a choice for Black people.

Kanye being Kanye, turned to the denizens of TMZ’s news room and asked if they felt he was a free thinker. Van Lathan, who had time that day, said what we have all been wanting to say to Ye, directly to his face.

Van Lathan’s response in its entirety:
“I actually don’t think you’re thinking anything. I think what you’re doing right now is actually the absence of thought. The reason why I feel like that is because, Kanye, you’re entitled to your opinion, you’re entitled to believe whatever you want.

“But there is fact and real life consequence behind everything that you just said. And while you are making music and being an artist and living the life you’ve earned by being a genius, the rest of us in society have to deal with these threats to our lives. We have to deal with the marginalization that has come from the 400 years of slavery that you said for our people was a choice. Frankly, I’m disappointed, appalled, and brother I am unbelievably hurt by the fact that you have morphed into something to me that’s not real.”

In just under a minute, Lathan perfectly encapsulated what many people (especially Kanye fans) have been saying on Facebook statuses and group texts as of late.

Lathan is a familiar face to anyone who regularly checks in to catch the latest shenanigans in the TMZ newsroom, but this Kanye moment has definitely elevated his profile. Twitter was quick to pile on the much-deserved praise for Lathan.

@people should make @VanLathan sexiest man alive for this. Or at least some sort of honorary avenger? https://t.co/saXjevi38g

Don’t usually get caught up in commenting about stuff like this but I saw what Kanye West said and I was ASHAMED. 400 Years of slavery a CHOICE???? Really! All I’ll say is this: I’m incredibly proud of that staffer from TMZ. Brilliant, Eloquent & totally appropriate response.#WTH

There is fact & real world, real life consequence behind everything you just said…the rest of us in society have to deal with these threats to our lives. We have to deal with the marginalization…from the 400 years of slavery that u said for our people was a choice.@VanLathan

.@VanLathan wanted to explode. I’ve been there.

But with precision and composure he embodied what Baldwin said, “To be a Negro in this country and to be relatively conscious is to be in a rage almost all the time.”