Learn from Kevin Hart: Four ways to cope when your close friend does you dirty

It's time to begin healing your heart. 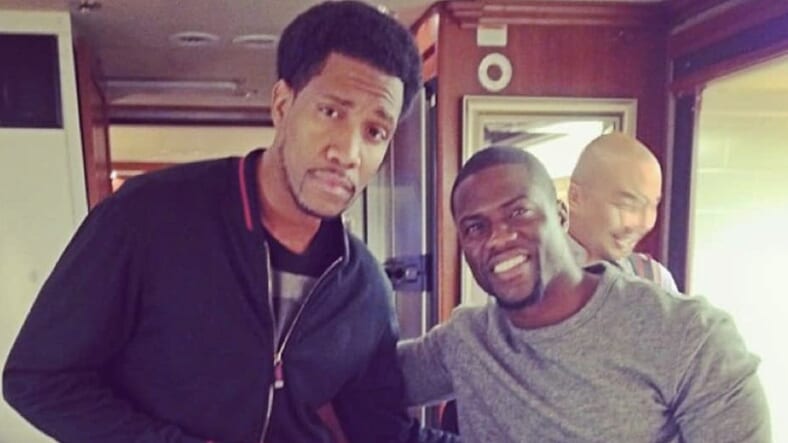 Kevin Hart’s long-time friend Jonathan Todd Jackson is allegedly the one who tried to extort Hart out of major money by exposing his cheating ways. (Courtesy of Instagram)

Sometimes it’s the people you least expect who end up being your biggest haters. Thursday, news broke that the person who tried to extort Kevin Hart by making footage of him cheating on his pregnant wife public, was actually his good friend of 15 years!

According to the Los Angeles District Attorney’s Office, Jonathan Todd Jackson was charged with one count of attempted extortion and one count of extortion by threatening letter.

Hart, was understandably in shock that his friend, who goes by the name “Action Jackson” and who he had given small parts in a couple of his films, would betray him so viciously.

“Mind blown…Hurt…at a lost (sic) for words and simply in complete disbelief at the moment. WOW,” he posted on social media after the news broke.

Mind blown…Hurt…at a lost for words and simply in complete disbelief at the moment. WOW

Kevin’s pain is devastating but unfortunately not that uncommon. Many of us have been hurt by those we held close and trusted with our secrets.

Below are four tried and true tips on how to make the best of finding out there was a Judas in your circle who was pretending to be a friend all along.

1. Collect all the facts, FIRST

When you get the first whiff of betrayal, it’s incredibly easy to blow an already messed up situation even more out of proportion.

The first step in preserving your sanity (and dignity) is to first gather all the facts before putting your need to flip a table.

Note I said facts, not opinions.

In some cases, this can be a challenge and you may find yourself relying on third party accounts, internet snooping, and flat out confrontations with your “friend” to create the closest thing to a semblance of the truth. Which is fine., but always take into account your sources as well.

Fight the urge to latch onto the most scandalous version of the story.

That need to create a greater melodrama is your ego and your pain talking. If someone credible tells you something, weigh that a bit more heavily than a gossip session with someone who you know is prone to messiness.

If you’re collecting information hoping it’s not that bad or attacking a situation hoping to illustrate how deeply you’ve been wronged, its fairly easy to manipulate details to fit either competing narrative.

Instead sit still, take a deep breath, and be willing to let your gut (and the facts) guide you to the truth even if its not what you expected to hear.

Once you’ve confirmed that a line has been crossed and someone close to you has done you dirty, you need to be honest about what this new chapter of life needs to look like for you to be made whole again.

It is only then that you can set boundaries with your former friend (and the people still in your life) about the best way to engage with you moving forward.

If the person in question is a former lover, this may mean asking them to move out, blocking their number and unfollowing them on social media so that there is no chance of you being dragged into reading spiteful posts that are clearly meant to get a reaction out of you.

If its a family member, this may mean opting out of certain family functions and finding out when this person is going to be around so you can choose if you want to even be in the same room with them.

Boundaries are meant to keep you safe and allow you the right to discern what works and what doesn’t. Do not let anyone guilt you into being put in an emotionally unsafe environment for their own convenience.

A lot of times someone will harm you and then mutual acquaintances will say unhealthy things like, “Well can’t you just suck it up for the rest of us? We want you both to be there.”

Maybe once you’ve had time to heal and process your feelings, cordially sharing space with a traitor may be an option, but don’t feel compelled to rush that process for others. People may think they want you both there, but the tension in the room will probably make them wish they’d uninvited one of you – if not both of you.

Spare everyone that unnecessary drama.

3. Unpack how you co-created this dynamic

Any situation that involves two or more people is co-created. Which means if you’ve found yourself in a situation of deep betrayal you have in some way played a part in that dynamic.

Now please don’t mistake the above statement for blame.

I’m not saying that it’s your fault when someone sneaks around behind your back and does hurtful ish. What I am saying though, is that this breach in trust shows that they were somehow enabled to do what they did, and you need to be honest about where that crack is, so that you can make steps to strengthen it.

Not every bad thing that happens to you is your fault, but it is definitely your responsibility to get yourself to a place of healing so you can get your happy back.

Maybe you were too trusting with personal information that probably should have been held closer to the vest.

Maybe you ignored red flags because your attachment to your friend made you blind to their dubious behavior.

Or maybe you sensed something was off for a while, but your fear of being seen as confrontational made you bite your tongue.

A lack of discretion, ignoring your gut feelings and remaining silent from a place of fear are all unhealthy habits that you probably needed to address anyways. So despite whatever discomfort, heartache or sorrow you may be feeling, also recognize that this situation is presenting you with the opportunity to actually fortify something in yourself that needed to be worked on regardless.

Our relationships will always reveal parts of ourselves that we’d never get to know on our own – yes, even the bad hurtful relationships. Be brave enough to listen to the lesson, so you don’t get stuck having to learn it again with someone new.

4. Give yourself closure (with or without their input)

In a perfect world anyone who betrays your trust would have a talk with their God of choice (and/or a good therapist), acknowledge the error of their ways, and apologize to you with the deepest sincerity for everything they’ve ever done to hurt you.

That’s the dream and for some of us it actually happens.

But even when it doesn’t, always know that you can close a painful chapter in your life with or without the help of whoever hurt you.

Holding onto anger is like drinking poison but expecting the other person to die. Don’t keep ingesting bitterness, trust issues, unresolved angst, and disappointment and then wonder why life doesn’t feel as happy as it used to. Of course it doesn’t – you’ve made sure of that!

Once you’ve gotten your facts straight, set healthy boundaries that you actually stick to, and unpacked all the wisdom that can be learned about how to prevent this from happening again, LET IT GO.

Let it go in words first.

Stop talking about it so much. No more looking at their social media accounts. If your friend brings it up tell them you’re moving past it. Words hold power, so starving that narrative will go a long way in ending this saga.

Then start looking at your internal dialogue.

Any time you get hit by a wave of anger or sorrow, let it wash over you, then take a deep breath and say, “I let this go. I choose to be better.”

Whenever your mind wonders to the person in question, stop whatever ugliness you’re thinking and say, “I forgive you. Thank you for this lesson.”

This may sound like a bunch of optimistic bull, but science has proven that what we say to ourselves creates energy shifts in our body, and ultimately in our minds.

If you want a life full of trustworthy people who treat you right and co-create positive experiences, you can’t keep dwelling on the handful of folks who did the opposite.

Anything that you let rob you of your joy has won.

And haven’t they already taken enough from you?