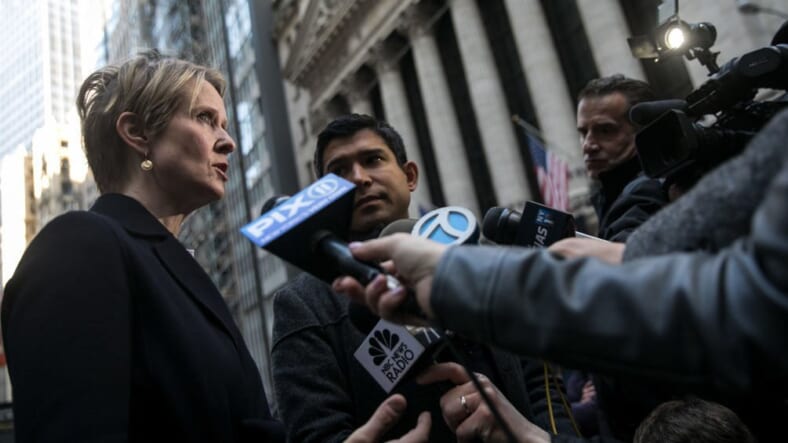 NEW YORK, NY - MAY 1: New York gubernatorial candidate Cynthia Nixon speaks with reporters following a rally against financial institutions' support of private prisons and immigrant detention centers, as part of a May Day protest near Wall Street in Lower Manhattan, May 1, 2018 in New York City. Across the world, people are protesting and marching on the traditional day of workersÕ rights. (Photo by Drew Angerer/Getty Images)

Cynthia Nixon needs a history lesson after she offended the African American community by saying that legalizing marijuana could serve as reparations in black communities.

The former Sex in the City star, who is now running for governor of New York,  made the insensitive comments and caused an uproar when telling Forbes magazine, “now that cannabis is exploding as an industry, we have to make sure that those communities that have been harmed and devastated by marijuana arrests get the first shot at this industry.”

“We (must) prioritize them in terms of licenses. It’s a form of reparations.”

Community leaders weighed in on the offensive comments.

“I’m for legalizing marijuana and I like Cynthia Nixon but putting pot shops in our communities is not reparations,” the Rev. Al Sharpton tweeted. “Health care, education!!”

“Reparations is a repayment for the free labor that built this country,” said Wright.

“Ms. Nixon should relegate her comments to legalization, pro or con,” he said. “I believe social equity should be a part of licenses to sell marijuana, if and when legalization does occur. However, it is insulting to my soul, that the free labor that my ancestors gave to this country would be equated with the selling of marijuana.”

The comments also did not sit well with Black Lives Matter chapter of Greater NY leaders who issued a scorching statement in response to Nixon’s comments.

“It does a disservice to our community for her to play into harmful stereotypes of African-Americans as drug users and dealers,” the group said in a statement. “And it does an even greater disservice to the enduring consequences of both slavery and Jim Crow and the inequities these systems of oppression perpetuated to claim that legalizing marijuana would somehow erase that experience.”

Black Lives Matter has called for Nixon to apologize.