White journalist who hilariously failed to get Michael B. Jordan to do the Wakanda salute, issues an apology

Nobody was taking it that seriously. 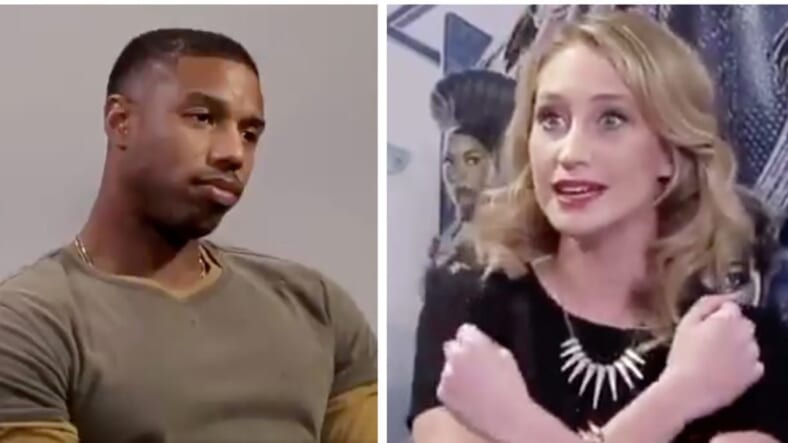 Maude Garrett is sorry, folks. Garret is the journalist who tried and failed to get Michael B. Jordan to do the Wakanda salute during an interview about Black Panther. The brief clip went viral this week.

We’re not sure if Jordan needed a nap or a Snickers or what, but he was having no parts of Garrett and her Wakanda greeting. Instead of returning the gesture, he simply said “I ain’t from Wakanda.”

He was right of course, his Black Panther character Killmonger does not hail from Wakanda. He’s an Oakland, CA native. It wasn’t so much what Jordan said though as the way he said it and the expression on his face. It’s comedy gold.

Black Twitter took no time at all piling on the jokes about the awkward exchange.  Mostly they were just pointing out that Killmonger was not from Wakanda and the fact that Jordan looked like he had no time for “colonizer” requests. All true things.

Garrett must have been feeling the heat because she felt posted about the video to put it in “context” and she also issued an apology.

READ MORE: ‘This is America: Women’s Edit’ is everything wrong with white feminism

“Since this is blowing up (without credit & fueling a misinterpretation) I’ll happily provide context: @michaelb4jordan wouldn’t do the handshake since his character Killmonger is from Oakland, NOT Wakanda. He’s staying true to the lore,” she wrote.

“I apologize to those that have found disrespect or offense caused by my actions in what was otherwise a fun and lighthearted chat about an incredible movie,” continued Garrett in a follow-up tweet.

I apologize to those that have found disrespect or offense caused by my actions in what was otherwise a fun and lighthearted chat about an incredible movie.

Most of the people who joked about the clip pointed out the fact that Killmonger was not from Wakanda,  so her first tweet doesn’t really provide any additional “context.” As for the apology, not sure anybody was actually offended, but good to see white folks falling back sooner than later instead of screaming about being a victim and unnecessarily escalating a situation.

Just for the heck of it, here’s the video again:

Michael said y’all can get on Chadwick’s nerves with all that but not me?? pic.twitter.com/inX9Xp7w5m