Johnny Perez, 39, will earn his bachelors degree in criminal justice after serving time in Rikers Island. (theGrio/Johnny Perez)
Johnny Perez used to speak to himself in solitary confinement, just to hear a human voice.

The isolation inside Rikers Island prison walls could drive anyone crazy.  But for Perez, then a 21-year-old young man facing 15 years for robbery (stemming from stealing food from a convenience store) he had to do whatever it took to find the will to live.

This week, Perez, 39, graduated with the title of “Brooklyn’s Best” from St. Francis College, with a bachelors of science degree in criminal justice.

It’s an accomplishment he could only dream of back when prison guards would laugh at him as they watched him study.

“You’re never going to be anyone… Why you keep trying to learn something… You’re still going to have a criminal record,” Perez remembers his tormenters saying. “[It’s] very discouraging to have to hear that constantly over and over again.”

Rikers Island is an institution notorious for abusing inmates, including Kalief Browder who would later commit suicide after surviving its horrors.  Perez said he similarly endured abuse.

“Some of that would just either look like just [correctional officers] turning a blind eye or being intentional about trying to do harm to me,” he explains in an interview with theGrio.

“Whether it’s not feeding me, whether it’s being placed in solitary [confinement]. I did a total of three years in solitary confinement in a space no bigger than probably the average bathroom.”

Perez immigrated to the United States from Cuba as a child.  He grew up in the Bronx and carried a gun for protection while engaging in street life, applying criminal solutions to his problems.

Perez says the change came about for him when he became an advocate for others in prison and began studying to earn his GED.

“I was the one in prison helping people trying to fight their cases and follow appeal briefs or translating appeal briefs into English because a lot of my friends didn’t speak English.”

After leaving he would encounter greater challenges– discrimination from a society that didn’t want anything to do with a former prisoner.

But at the suggestion of an advocate, he applied to the St. Francis College Post-Prison Program, quickly putting his smarts and public speaking skills to use, becoming an advocate for others who are incarcerated.

Today he is the Director of U.S. Prisons Program for the National Religious Campaign Against Torture and has even testified before the United Nations.

In addition to fighting to end solitary confinement practices, he’s focused on being a father to his 16-year-old daughter, who was only days old when he got locked up.

“For a long time I was ashamed about having a criminal record but I came to a point where I realized that I paid my debt to society… Who better to help reenter society than somebody who also had to reenter society?”

Perez encourages anyone who has been incarcerated to stay hopeful.

“There are a lot of times when the people around us doubt us, when they chastise us and they try to hold us back,” says Perez. “We don’t have to internalize other people’s views or limitations of ourselves.”

“Circumstances don’t make you who you are, they reveal you to yourself….You have to be able to believe in yourself even in the absence of evidence that you will succeed.” 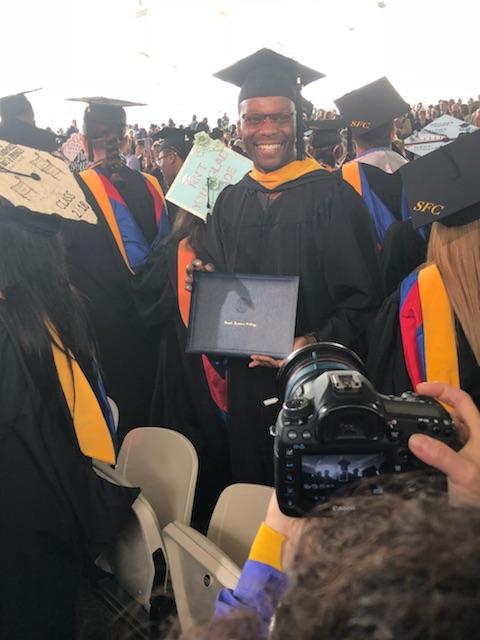 Johnny Poses at his college graduation after receiving his degree on May 17, 2018. (Johnny Perez)