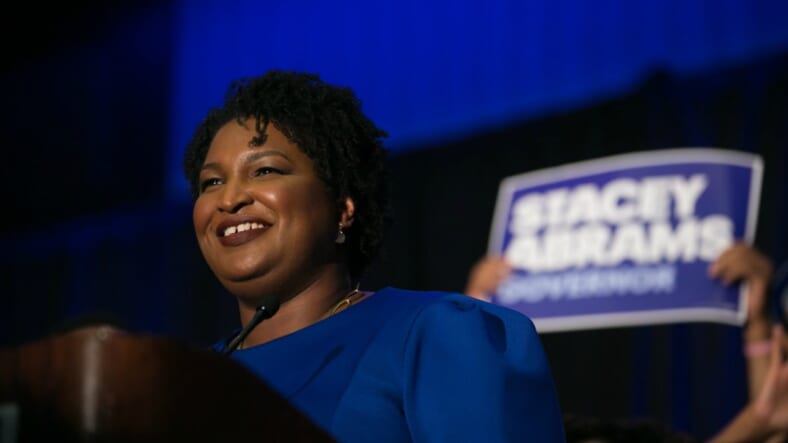 Georgia Democratic Gubernatorial candidate Stacey Abrams takes the stage to declare victory in the primary during an election night event on May 22, 2018 in Atlanta. If elected, Abrams would become the first African American female governor in the nation. (Photo by Jessica McGowan/Getty Images)

Stacey Abrams made history on Tuesday when she won the Democratic primary race for Governor in Georgia, making her the nation’s first Black female nominee of a major party.

If her winning streak continues, she will become the country’s first African-American woman to become governor.

Abrams ran a grassroots campaign that spoke to the heart of the working class and beat Rep. Stacey Evans in a stiff campaign that attracted national attention, and major endorsements, including former presidential candidate Hillary Clinton, reports CNN.

According to the Los Angeles Times, Abrams gave an inspiring victory speech at an Atlanta hotel, Abrams shared her plans for the future with a crowd of supporters. “We can repeal campus carry and we can expand HOPE,” she said in reference to a law that allows guns on college campuses.

This morning Evans graciously lodged her support behind Abrams, showing solidarity and support in the Democratic party.

Congratulations, @staceyabrams. It was an honor to run in this historic primary against you. Now it’s time to rally behind our nominee – let’s turn Georgia blue, y’all. #gapol #gadems

While winning the Democratic nomination is a huge fete in itself, Abrams will have her work cut out for her if she hopes to win in November. It has been 20 years since a Democrat won was elected as governor in Georgia.

It is still unclear which Republican candidate Stacey Abrams will face in November because the GOP primary nomination race did not produce a clear winner. Republicans, Lt. Gov. Casey Cagle and Secretary of State Brian Kemp beat out three other opponents on Tuesday, but because neither of them won by a 50% margin, they will have a run-off on July 24 to determine the party’s candidate for Governor and Abrams will be up against the winner of that race.

Political experts are heralding Abrams as the future of American politics because of her transparency (she admits to once being $200,000 in debt from accumulated student loans, credit card debt and tax payments) and her ability to relate to people from both sides of the political spectrum. Abrams, however, says that’s not necessarily her focus.

Abrams has said she plans to reform bail policies, decriminalize traffic offenses, and increase training that recognizes implicit bias. She hopes to do so by expanding support around community policing while making the connection between disparities in school funding, health care access, and job opportunities to over-incarceration and prolonged probation sentences.

The Gulfport, Miss., native who ran her campaign with speeches that sounded like a Baptist preacher said she recalled a time as a high school when she felt rejected standing outside the Georgia Governor’s Mansion at an event honoring the state’s top students.

“In front of the most powerful place in Georgia, telling me I don’t belong there, that’s resonated for me for the last 20 years. The reality is having a right to be places does not always mean that you’ll gain admission,” she said. “As an African-American woman, I will be doing something no one else has done.”