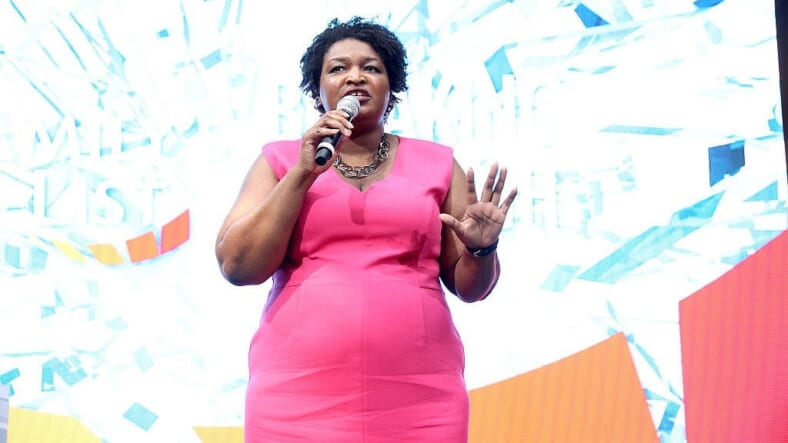 <> at Kimmel Center for the Performing Arts on July 27, 2016 in Philadelphia, Pennsylvania.

Stacey Abrams is vying to become the first African American governor in Georgia and some influential donors are putting their money where their mouths are—to the tune of $2.5 million

Donors are stepping up to support the former House Minority Leader for the Georgia General Assembly and State Representative for the 89th House District in hopes of seizing the Republican Party’s stronghold over the state.

San Francisco-based philanthropist, Susan Sandler is spending $1 million to help boost Abrams’ Democratic campaign, according to USA Today. Sandler has also recruited other big donors and has commitments for another $1 million.

The Democrats believe that the red Southern state could turn blue given what happened in Alabama. Seeing Doug Jones lay the groundwork for flipping states and turning deep-red Alabama blue and becoming the first Democrat elected to the Senate in the state in 25 years means anything is possible.

“The upset election of Doug Jones in the Alabama Senate race in December gave a glimpse of a new electoral equation,” Sandler wrote in the memo. “If we elect Stacey, we will show that we know how to win in the South without compromising our principles and beliefs.”

And she knows what she’s talking about.

Sandler and her husband Steve Phillips helped fuel the large voter turnout in the Alabama Senate race. They plan to use the same strategies: a mix of door-to-door outreach, phone calls and advertising to turn the tide on the Georgia governor race.

African Americans make up about 30% of the electorate in Georgia. Sandler and  Phillips want some 80,000 black voters to back Abrams in the primary. They plan to hire 250 to help them push the campaign.

Things are already heating up in the Georgia governor’s race with Abrams’ opponent Stacey Evans.

The political ad for Stacey Evans‘ bid to be the Democratic nominee in the Georgia‘s gubernatorial race hit the airwaves just in time for the weekend of the Martin Luther King, Jr. holiday.

And it did not go well.

The ad starts off just as you would expect. Evans, a white woman running for office in a state with a large Black voting population, is attending Sunday service at a Black church, seemingly pandering to its religious Black, Democratic congregants—a base she so desperately needs to hold close. But, Evans one ups the usual political theater by not just going to any historic Black church, but arguably THEE most historic Black church in the nation.

Evans and her production crew filmed the ad in the Ebenezer Baptist Church, the church home of Dr. King. In the video, she is seen interacting with church goers, clapping (probably off beat) to the choir’s selections, listening intently to the preacher, and of course bowing her head in prayer as she holds hands with her fellow parishioners.

It’s all from the playbook of Political Pandering 101. Then comes the surprise ending when a transparent illustration of Dr. King’s face hovers in front of Evans’ face. In effect, this display of digital dishonesty super-imposes Dr. King’s face onto Evans. It’s digital MLKblackface.

The video has since been removed, but the internet lasts forever, so Evans’s gaffe has not disappeared.

The Root‘s Jason Johnson investigated this story to see if anybody would take ownership of the campaign mis-step. Evans’ Campaign Manager Jeff DiSantis blames the Stacey Abrams camp.

“The Abrams campaign has decided to distort a video made by the campaign’s digital company. As is usual in modern campaigns, they accompany Stacey to events so that the campaign can share our activities with the public… While the Abrams campaign is trying to divide our state, the Evans campaign will continue to seek the vote of every Georgian who wants to bring hope back to Georgia,” DiSantis told The Root.

If no one will take the blame, sounds like maybe Evans has only herself to look to on this one.