Donald Trump on NFL players who kneel during national anthem: ‘Maybe you shouldn’t be in this country’

He does not believe standing in the locker room should be an option. 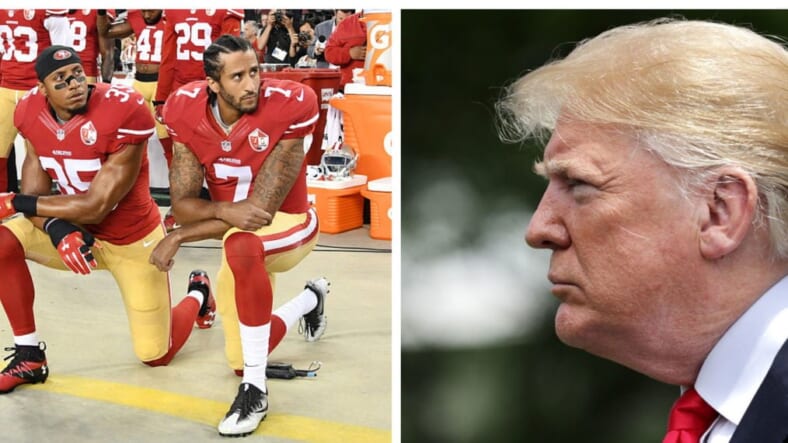 In a Thursday morning Fox & Friends interview, Donald Trump expressed his support of the NFL’s ban on kneeling during the national anthem.

Though Trump did not like that people had the option of staying in the locker room, he was generally in favor of the new policy. This comes as no surprise, considering that Trump weighed in on the issue repeatedly last year in speeches and in social media, at one point even calling the protesting players “sons of bitches.”

Fans also had mixed reactions, with some refusing to watch NFL games because of the seeming lack of support from league higher ups for the protests and other fans also refused to watch the NFL because they felt the protests were disrespectful and unpatriotic. The result was NFL ratings taking a hit overall.

NFL commissioner Roger Goodell issued a statement about the policy.

“The efforts by many of our players sparked awareness and action around issues of social justice that must be addressed. The platform that we have created together is certainly unique in professional sports and quite likely in American business,” he wrote.  “We are honored to work with our players to drive progress. It was unfortunate that on-field protests created a false perception among many that thousands of NFL players were unpatriotic. This is not and was never the case.”