OPINION: The NFL’s latest policy on player protests fumbled its chance to stand on the right side of history 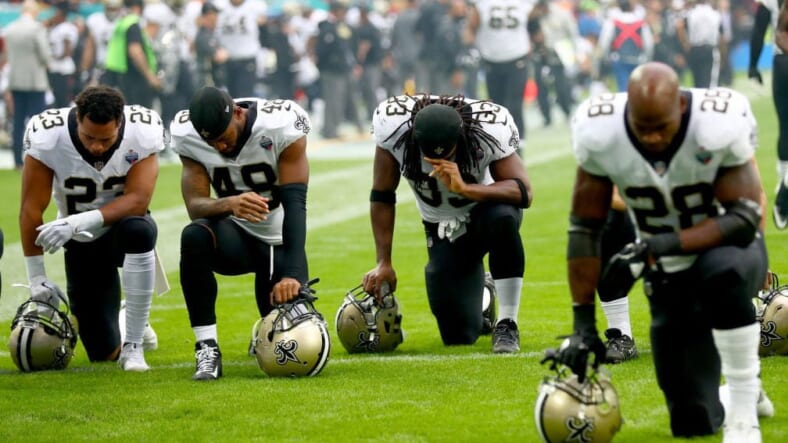 The National Football League in all its empirical glory just approved a new policy that mandates that any player who is on the field must stand for the national anthem. If they choose not to participate, said player has to then remain off the field by staying in the locker room area. If a player wants to defy this new rule by kneeling, sitting, or doing anything other than standing on the field as “Oh, say, can you see…” is played in the background, players will ultimately be punished by their team and the team will likely be fined by the league.

Why are we still talking about this?

The NFL wants to reignite a debate that could have easily gone away. Earlier this week, the league announced that it would spend $90 million over seven years, to support social justice causes espoused by a group of players who have been meeting with owners since last year. Clearly that’s the going rate for silencing players who are already (silently) kneeling or sitting in protest of police brutality and injustice.

We pretty much know that the purpose of those meetings was to mediate tensions between players and owners in the wake of the Colin Kaepernick kneeling controversy. The league hasn’t said exactly which causes their boatload of money would go to, but it’s clear that the financial commitment is aimed at presenting Roger Goodell and NFL owners as a good-faith ambassadors coming off a season when ratings are much lower than expected and fan animus is high.

The NFL had an opportunity here to just take the win and be the good guys for once, but they just jacked it up. Why not just feel the glory of public goodwill and move along your way, especially after yet another season of muddling through the mishandling of off-field issues.

And it might have worked, however incrementally, if the owners weren’t simultaneously meeting to devise a plan to shoot themselves in the foot in a way only that Plaxico Burress and Aquib Talib would understand.

In the interest of fairness, NFL owners and executives kicked around a number of arcane proposals during their offseason talks, with most never seeing the light of day (unless, of course, we’re talking about ways to make determining a catch even more confusing). This is why no one really expected a measure penalizing teams whose players take a knee during the pregame anthem would actually get approved. We just assumed that this would meet the fate of most other bad ideas.

You know there’s only one person to blame…Donald Trump.

Kaepernick’s original protests went unnoticed until the media reported on them, and only became a source of controversy after Trump started tweeting. It was never the protests that got the NFL in hot water, it was the attention to the protests and the owners’ subsequent inept response. If the NFL wants to avoid that spectacle in the 2018 season, penalizing teams who then penalize their players for kneeling before a game is a terrible strategy.

Why in the world would NFL owners even consider something guaranteed to bring more, not less, attention to the issue of kneeling? It just makes no sense unless you consider the real reason why owners are willing to spend $90 million on “social justice” programs in the first place: Kaepernick. Remember him?

It might be hard to, as he’s been barred from getting even an NFL tryout since opting out of his contract with the San Francisco 49ers after the 2016 season. He’s currently suing the NFL, alleging the owners effectively colluded to keep him out of a job over his silent protest of kneeling. It’s almost impossible to argue against that looking at who else the NFL employs.

Kaepernick is 30 years old, the age when most elite QBs reach the peak of their talent. It’s fair to argue he’s not an elite QB, but he led the 49ers to a Super Bowl only two seasons before he was pushed out of the league. By all accounts, he’s still in shape and hasn’t been injured. He’s almost certainly still better than most backups and as serviceable as half the starters in the NFL today. And, lest we forget, we’re still talking about an organization that allows accused racists, sexual deviants, admitted substance abusers, those who commit cruelty to animals and domestic abusers amongst its ranks. I shouldn’t have to say this, but Kaepernick has never been caught up in any of these types of crimes or scandals.

The NFL knows it can’t win that argument with reason, so it’s attempting to win it with money. Unfortunately, that message has now been tossed in the toilet. The $90 million given towards worthy organizations that focus on justice and reform has been buried under each team’s rules that will now hammer players and personnel who don’t comply with this kneeling/sitting policy.

The NFL had the chance to change hearts, change minds and allow at least half of their fans to return to the game they love. Instead, we’re back to where we started last season and it’s as if the needle hasn’t moved at all.

Keith Reed is a writer and commentator whose work has appeared in ESPN the Magazine, the Boston Globe, Essence, Ebony and elsewhere. Follow him on Twitter and IG @K_dot_RE