The Best Rap Battle Since Jay-Z vs Nas: A full timeline of the Drake, Pusha T beef

It's getting "super ugly" between Push and Drake. 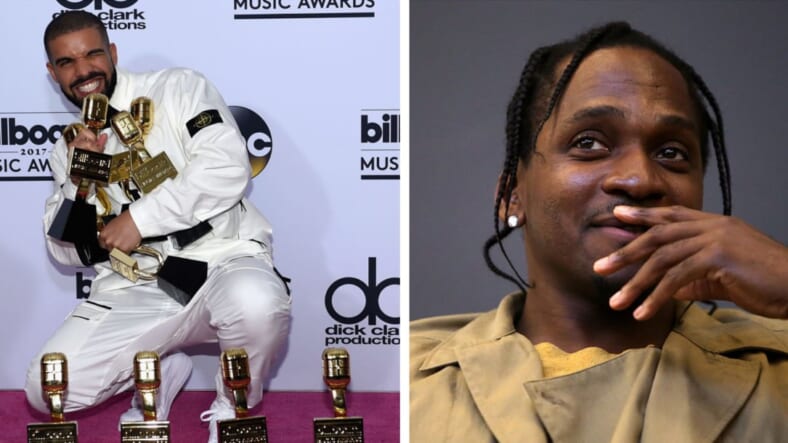 The day after Memorial Day was like media catnip for Black folks.

First, there was life coming at Roseanne Barr (2018’s version of Archie Bunker) fast as f—.  And, just when cats were settling in for the night, exhausted from working the day after the holiday, Pusha T finally responded to Drake’s “Duppy Freestyle” with “The Story of Adidon.”

A lot of rappers make nice after so-called beefs that seem orchestrated to sell records, but Push pretty much killed any chance that he and Drake would ever be cool again with “Adidon.” Spit over Jay-Z’s “The Story of O.J.” Push takes shots by name at damn near everyone in Drake’s immediate family. Most shockingly, Push pokes fun at the fact that Drake’s longtime producer, Noah “40” Shebib, suffers from multiple sclerosis. (Shebib was quick to respond)

“The Story of Adidon” reminded me immediately of Jay-Z’s “Super Ugly,” the last track of the legendary Nas/Jay-Z battle, which he released after “the streets” determined Nas won with “Ether.” Jay gets into vivid detail regarding how he, too, smashed Carmen, the mother of Nas’ daughter Destiny.

All that talk of leaving condoms in Destiny’s baby seat offended the sensibility of Jay’s mom, Gloria Carter, so much that Jay publicly apologized for it. I wouldn’t be surprised if Push apologizes for “Adidon” at some point – especially for the shots at 40 – but he made it abundantly clear that he didn’t come to play games.

What most folks don’t realize is that shit between the two of them has been brewing for years. Here’s a timeline:

One of the most compelling things about this beef is that Drake was publicly a fan of Clipse, Pusha T’s former group with his older brother, Malice. On a show called When I Was 17, Drake admits that he purchased a microphone that Pusha T apparently used and autographed online for $200. It’s the internet, so there’s an above-average chance that Drake got got, but the sentiment will be on the internet for all to see forever.

imagine buying a pusha t signed mic off eBay for $200 when you’re 17 and then dropping “duppy freestyle” 14 years later. we are in the darkest timeline lmfao. pic.twitter.com/4AJhAFrj5u

Pusha drops a freestyle over a Drake track (2011)

In 2011, Push drops “Don’t F— With Me” over Drake’s “Dreams Money Can Buy.” He raps, “Rappers on their sophomores, actin’ like they boss lords/ Fame such a funny thing for sure/ When n—as start believing all them encores…” Drake had recently dropped his sophomore album, Take Care. Yeah, that wasn’t about Drake at all.

Push gets unambiguous with his shit (2012)

In 2012, Push releases “Exodus 23:1,” a clear diss track aimed toward Lil’ Wayne and his Young Money imprint, of which Drake is a member. Push raps, “Contract all fucked up/ I guess that means you all fucked up/ You signed to one n—a that signed to another n—a/ That’s signed to three n—as, now that’s bad luck.” Needless to say, Weezy was no fan.

Fuk pusha t and anybody that love em

On Drake’s 2013 album Nothing Was The Same (my personal favorite Drake abum), the Canadian wunderkind gets at everyone dissing YMCMB on the “Tuscan Leather” track. “I’m just as famous as my mentor/ But that’s still the boss, don’t get sent for/ Get hype on tracks and jump in front of a bullet you wasn’t meant for.” Drake was more of a lover than a fighter at the time, so he wasn’t about to drop names. Yet.

Meek Mill ignites a feud with Drake in 2015 when Meek accused him of employing ghostwriters, namely a dude named Quentin Miller that Drake plucked from obscurity. Since real rap heads believe that ghostwriters are verboten, the heavy allegation set Drake off to release two songs, “Back to Back” and “Charged Up,” that result in a clear and decisive victory that Meek might still be weathering if a prison term didn’t reinvigorate his career. The battle earns Drake props he didn’t previously have among lots of hip-hop heads who’d dismissed him as a singing ladies’ man.

Guaranteeing that this beef will carry over at least three presidential terms, Push drops the hook-free wonder “H.G.T.V.” in 2016. He raps, “It’s too far gone when the realest ain’t real/ I walk amongst the clouds so your ceilings ain’t real/ These n—as Call of Duty ’cause their killings ain’t real/ With a questionable pen so the feelin’ ain’t real.” Drake’s first EP is called So Far Gone, which eliminates guesswork regarding whom Push is talking about. 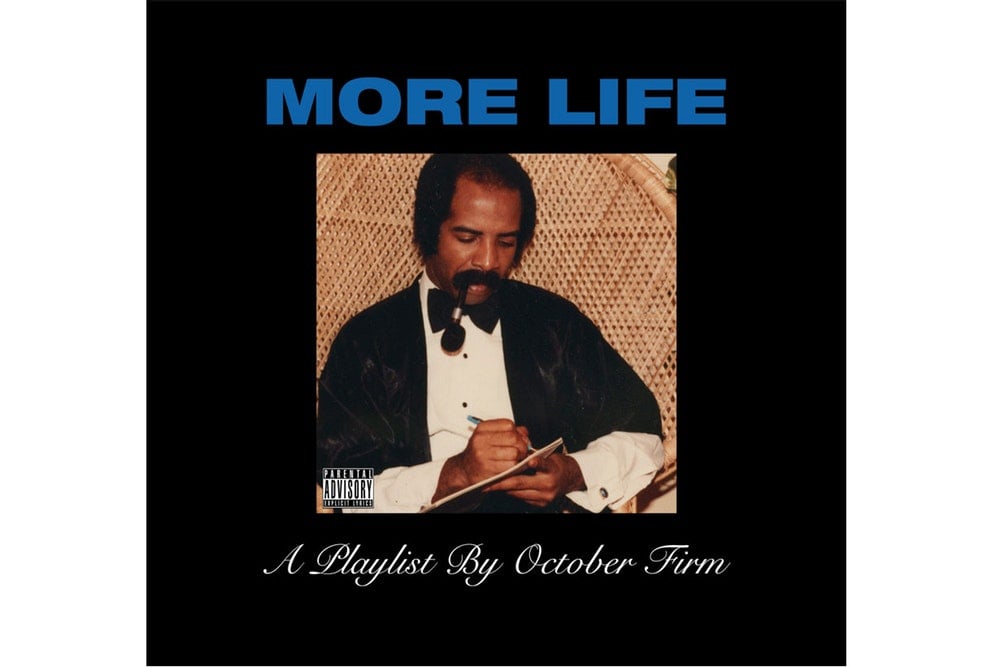 On his 2017 “playlist” (read: recycle bin fodder) More Life, Drake raps, “But really it’s you with all the drug dealer stories/ That’s gotta stop, though/ You made a couple chops and now you think you Chapo” on “Two Birds One Stone.” He doesn’t call Push out by name, but this isn’t the last time he’ll deliver bars about Push’s drug-dealing acumen.

On May 25, Push releases DAYTONA, a seven-track, Kanye West-produced album that closes with “Infrared,” a track that goes at Drake and Young Money. He raps, “It was written like Nas, but it came from Quentin.” Snippets from the song, including the diss, drop earlier in the week, giving Drake a chance to clip up, and…

In what might be the most ingenious masterstroke in all of rap beef history, Drake drops the “Duppy Freestyle,” the first real headshot after years of them flicking rubber bands at each other, on the same day as the DAYTONA release. Twitter seems to turn on Push quickly: that morning, Push was a genius who’d released a classic album; that evening, Drake was the G.O.A.T. who “destroyed” Push’s career (which isn’t really possible at this point).

Drake and his people responded to Push’s Twitter request to invoice him for bringing attention to his record by posting…an actual invoice, with “Promotional assistance and career reviving” under “FOR PROFESSIONAL SERVICES RENDERED.” Things look bad for King Push.

Drake posted a $100k invoice to Pusha T and GOOD Music. As a freelancer, I can tell you that invoices sent on Friday at 9pm ET aren’t getting paid ? pic.twitter.com/c5HQc6NUuZ

“The Story of Adidon” carpet bombs everything before it (2018)

Push waits until everyone is settled in from the long holiday weekend (smart) to drop “Adidon.” The track includes Drake’s rumored baby Adonis with the ex-porn star Sophie Brussaux, his once-estranged daddy Dennis Graham, and the 40 diss. The art Pusha uses for the piece are actual pictures of Drake in blackface, which somehow seems more offensive than it should be, considering Drake is a Black man. Ultimately, Instagram snatched the image from Pusha T’s account due to the original photographer saying he did not approve of the use of the image for this project.

Please stop referring to this picture as “artwork”…I’m not an internet baby, I don’t edit images…this is a REAL picture…these are his truths, see for yourself https://t.co/gd6vRS3HM8 pic.twitter.com/2el58HEZ8F

Whether or not you want to take the fusillade of accusations between both rappers at face value, there’s no arguing that beef between two rappers who matter is fantastic for the culture. King Push has been an established bar-slinger for the better part of two decades, and, regardless of if Aubrey employs ghostwriters for his best shit, he can get busy on the mic when he wants to – check out any of the “A.M.” tracks.

Make no mistake: Drake vs. Pusha-T is the most exciting hip-hop battle since since Nas vs. Jay-Z, which is so old now that folks born during the beginning of it are damn near of legal drinking age. The 2015 feud between Drake and Meek Mill was so one-sided and inert that history is in the process of forgetting it as I type. This battle, however, will be far more interesting than the re-borrowed library book that is the upcoming NBA Finals.

I’m not sure how Drizzy can adequately respond to “The Story of Adidion,” as it would require him to do some serious digging into Push’s most intimate business, or simply make some shit up that we would all believe. Either way, we’re all on the edge of our seats waiting to see the next chess move.