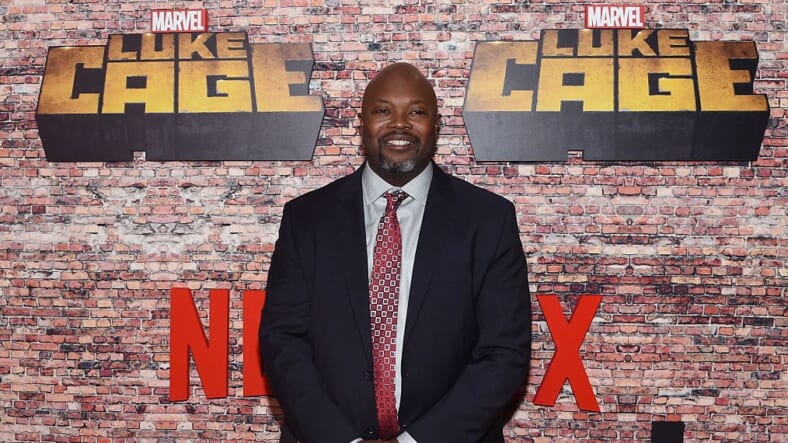 The second season of Luke Cage is almost upon us and TheGrio caught up wth the show’s writer, producer, and director, Cheo Coker to find out what we can expect this time around.

Coker spent much of his life as an entertainment journalist interviewing everyone from Prince to Queen Latifah and he insists that his past life heavily influences his approach to the Netflix series that stars Mike Colter, Simone Missick, Alfre Woodard, and Gabrielle Dennis, among others.

“It never leaves me. As much as I love being a show runner, I still feel like I’m just a journalist playing hookey,” he says. “It allows me to understand and not take things so personally. I read everything and I engage and surprise people because I respond to fans on social media. I have fun with it. It should be a conversation.”

Coker is committed to creating the best show possible, but he isn’t too worried about the haters.

“All I know is we collectively worked our asses off and we tried our best and sometimes you are going to fail. You just want to leave it all on the field. You strive for greatness every single time. My thing about Season 2 is that in my heart of hearts I believe that Season 2 is better than Season 1. I think Season 1 was a great season but we went harder this time. Hopefully people agree but if they don’t agree I’m not gonna lose sleep over it,” he explains. “I know we couldn’t have worked any harder and I know we could not have mined any more of our emotional depth to get to these places. That’s all you can ask of yourself is to demand excellence from yourself and hopefully achieve the appreciation of others.”

Coker’s is anything but apologetic about the show and his approach to it mirrors the intentions of some of hip-hop’s greatest artists.

“Ultimately, the show is what it is. The show is political. The show takes chances the same way the records I loved and came up with took chances. Chuck D, KRS-One, Rakim, Outkast, MC Lyte, Queen Latifah all recognized the power of their voices. When they made records and they made statements they knew they had something to say and they remembered and embraced the power of music’s ability to say something,” he explains.

“That’s the one thing that has been lost. People go on and on about rhyme styles and music. If you criticize today’s hip-hop you sound like an old person. What’s lost is people forget the power that they have. Those people who remember that power are the ones who we see embraced on a much bigger scale. Janelle Monae knows that power and that’s why you see her embraced on a big scale. Beyonce at Coachella, that was her Motown 25 so she took that moment to say something to the world that people are still talking about. Donald Glover is old enough to remember his influences to do that. Even to a certain extent, someone like J. Cole…he isn’t political but he still has something to say.”

Just like some of his favorite artists, Coker is focused on the power of statements made on the show, especially during this rise of the black superhero we’re seeing on television and on the big screen.

“With Luke Cage, we want to do the same thing. We want to be a part of the conversation. Of course there’s a back and forth between us and Black Lightning. Loving Outkast and loving Heiroglyphics never prevented me from loving NWA or Public Enemy or A Tribe Called Quest or UGK. We had such diversity in sound and musical evolution that they could all exist simultaneously,” he says.

“As black people, we have always had that kind of diversity in our music but never in television because anything black only gets listed one way. Whereas if you’re a white film critic, you can love Woddy Allen and Scorcese and Oliver Stone and they don’t contradict each other. We’re only now getting to the point in black television and black film that we’re able to celebrate our diversity in the same way. So it isn’t about Black Lightning vs. Luke Cage, it’s about evolving to the point that black superheroes are so lucrative, there are going to be more black superheroes than you’ve ever seen in the next couple years.”

Last season, the show caught some flack when Luke Cage demanded that someone refrain from calling him the n-word, prompting people to assume that the character is a conservative.

“You know what is? It’s that every generation has a different relationship with the word n****. My grandfather who was a Tuskegee airman, he heard that word in a segregated unit who had white instructors who wanted these pilots to wash out and fail. You would hear that word with a hard “er.” Every generation since then has a much easier relationship with that word to the point that now people just use that word for rhythm when they rhyme. It has no meaning,” he explains. “I come from a generation that was the last  to remember what music sounded like before hip-hop existed and when you only heard that kind of language on Richard Pryor records or in the street. You wouldn’t hear it in music or entertainment so the word itself was never comfortable.”

According to Coker, the hero’s response to the word is appropriate, but does not make him a conservative.

“Because you have the scene in Episode 2 where Luke is like, ‘Don’t call me that,’ people are like ‘This is respectability politics.’ That’s bullshit. The thing is, Luke Cage is more Big Daddy Cain than Herman Cain. I think if you aspire to something that doesn’t make you conservative because the last thing I am is conservative. I also understand the history and complexity of certain things. Even as much as I use the word n****, it’s not like you aspire to do that. You have to understand how many different meanings there are. That’s what you see in the show. You have Luke taking it one way and you have Cottonmouth using it in another way. It shows Mariah Dillard who despises that word at the beginning, but by episode 13 as she embraces her inner gangster, she has a different relationship with that word,” he says.

“With the exception of Kanye West, who’s a sellout. I mean, f**k that. I’m sorry. I got no qualms about that. If people are going to attack me through Luke Cage for being conservative…Luke Cage ain’t no conservative. He certainly is not MAGA because America was already great under the first black president under two terms.”

Even though he’s the show runner for the series, Coker admits he still responds like a fan to certain aspects of the show.

“Luke Cage represents those heroes of mine like Malcom X, MLK, Fred Hampton that weren’t bulletproof. I remember being in a meeting about episode 7 and talking about once again, someone is shooting at Luke Cage. If they know he’s bulletproof why are they still shooting at him? I said, ‘I will never get tired of seeing a bulletproof black man.’ Every time the bullets bounce off of Luke Cage, I get a visceral thrill out of it. It’s because of the empowerment you feel,” he says.

Season 2 of Luke Cage premieres on Netflix on June 22.