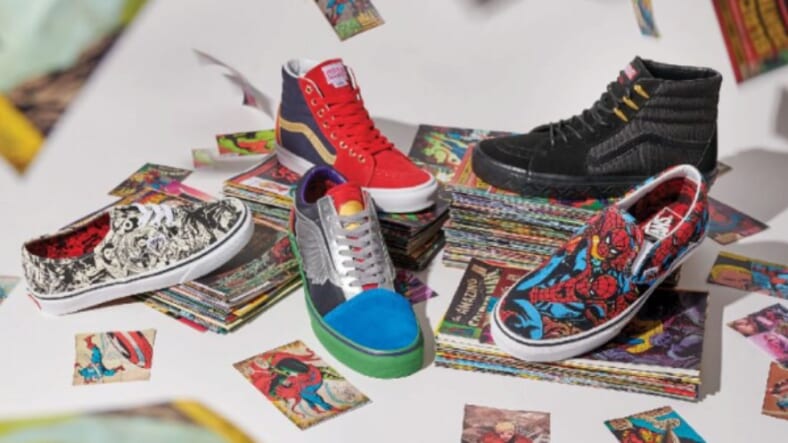 And the beat goes on with Black Panther and this time you can tap your feet to the beat in a stylish pair of Vans thanks to the Marvel and Vans shoe mash-up, reports the Hollywood Reporter.

If anyone yells “What are those?” just tell them that Marvel and Vans released the new “Off the Wall” superhero collection. And there’s nothing off when it comes to these styles because they are pretty on point.

Not only does the footwear feature characters from the blockbuster movies, but there are accessories and apparel to complete your fanatical look. If you’re going to kick butt in the Wakanda kingdom at least do it in style, right?

Get your coins ready because the collection is releasing this Friday with some 70-plus shoe styles ranging from Avengers, Black Panther and Deadpool to Iron Man and Hulk.

If those styles don’t tickle your fancy then customers can design their own Vans x Marvel designs online.

There’s also an online the Marvel Shop that has branded tees, bedding and shoes, including Black Panther 990v4 Sneakers for Men by New Balance, according to the site.

Black Panther banked more than $1.3 billion worldwide to date so it’s no wonder Marvel is capitalizing on the apparel market.

After there was a little fuss about their being a shortage of Black Panther toys, they are making it up with an abundance of shoes, tees, hats, sandals and socks apparel. And T’Challa is front and center on the Black Panther Sk8-Hi sneakers, which you can cop for a cool $75 bucks.

And of course Infinity Wars is making a showing with the “What The Avengers” Old Skool. It pays tribute to the four original Avengers: Hulk, Captain America, Iron Man and Thor.

Marvel Studios’ Ant-Man and the Wasp is set to hit the theaters July 6.