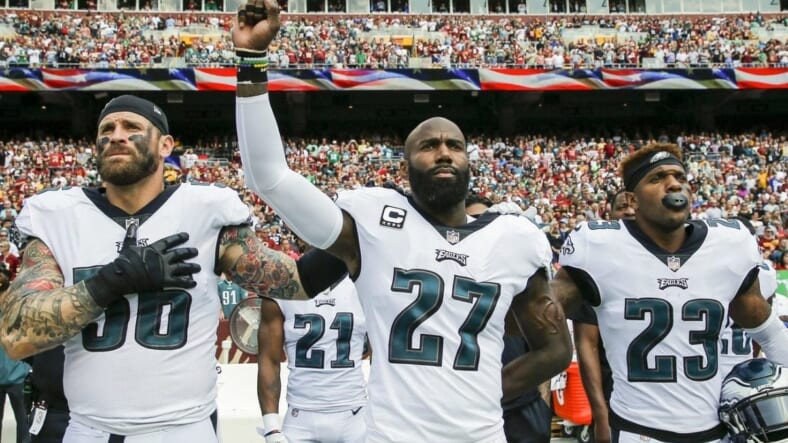 The Philadelphia Eagles will not be attending a ceremony at the White House, according to a new statement by President Donald Trump.

The decision comes a day before the event was to occur.

The statement says that the defending Super Bowl champions disagree “with their President because he insists that they proudly stand for the National Anthem, hand on heart, in honor of the great men and women of our military and the people of our country.”

The Eagles had planned to send a smaller delegation but “the 1,000 fans planning the event deserve better,” according to the statement.

The statement also says that Trump will instead have a “different type of ceremony — one that will honor our great country, pay tribute to the heroes who fight to protect it, and loudly and proudly play the National Anthem.”

The White House says that Super Bowl champion Philadelphia Eagles will not visit the White House, in a statement:

“They disagree with their President because he insists that they proudly stand for the National Anthem” pic.twitter.com/uuu3PWvQBo

ESPN journalist Jemele Hill was quick to point out that player’s had boycotted White House invitations from President Obama in the past but with a very different outcome.

And just for context, several athletes did not attend when former president Barack Obama because of political differences/beliefs. The response wasn’t to disinvite the whole team.

In May, the NFL announced that the league will now require players to stand on the field during the national anthem during take up the option of staying in the locker room, reports ESPN.

“This season, all league and team personnel shall stand and show respect for the flag and the Anthem,” NFL commissioner Roger Goodell said in a statement. “Personnel who choose not to stand for the Anthem may stay in the locker room until after the Anthem has been performed.”

“We believe today’s decision will keep our focus on the game and the extraordinary athletes who play it — and on our fans who enjoy it,” he said.

If players do not follow the NFL’s no kneeling rule, or even sit, they are subject to a fine. That includes, players and team personnel.

Goodell said the NFL is “dedicated to continuing our collaboration with players to advance the goals of justice and fairness in all corners of our society.”

The league will update its game operations manual to include the new requirement.

“The efforts by many of our players sparked awareness and action around issues of social justice that must be addressed,” Goodell said in the statement. “The platform that we have created together is certainly unique in professional sports and quite likely in American business. We are honored to work with our players to drive progress.

“It was unfortunate that on-field protests created a false perception among many that thousands of NFL players were unpatriotic. This is not and was never the case.”

After the new police was announced Eagles owner Jeffrey Lurie issued a statement on where his organization stood on the new policy and how it would be handled.

“I have always believed it is the responsibility of sports teams to be very proactive in our communities. In this great country of ours, there are so many people who are hurting and marginalized, which is why I am proud of our players for continuously working to influence positive change,” the statement began.

“Their words and actions have demonstrated not only that they have a great deal of respect for our country,” the statement continued, “but also that they are committed to finding productive ways to fight social injustice, poverty and other societal issues that are important to all of us. We must continue to work together in creative and dynamic ways to make our communities stronger and better with equal opportunities for all.”