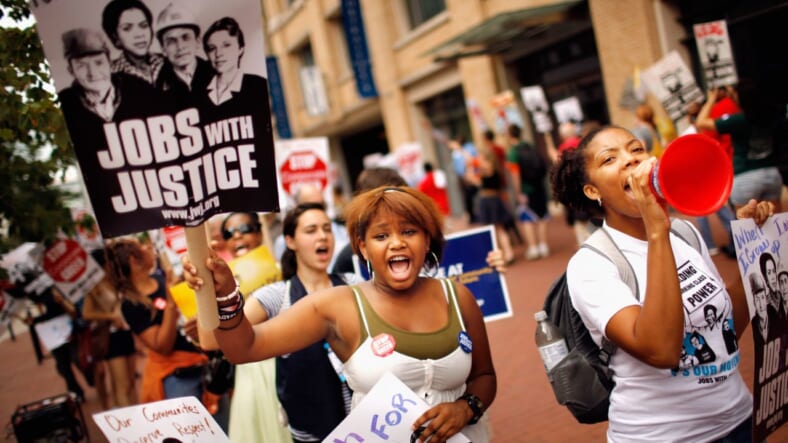 Hundreds of people from several different labor rights groups demonstrate in the street in front of the Walmart Federal Government Relations offices August 5, 2011 in Washington, DC. Organized by the Jobs With Justice 2001 Conference, the demonstrators called on Walmart to secure decent, living wage jobs during their attempt to build four new stores in the District of Columbia, and not to retaliate against associates who join labor organizations. (Photo by Chip Somodevilla/Getty Images)

GENEVA (AP) — A U.N.-supported human rights expert has blasted the yawning gap between rich and poor in the United States, insisting in a new report that the world’s richest country “is now moving full steam ahead to make itself even more unequal.”

The United Nations’ human rights office said Monday that Philip Alston, an independent expert commissioned to examine “extreme” poverty, prepared a report on the U.S. that faults “successive administrations” in Washington for failing to uphold treaty commitments to economic and social rights.

The Australian-born New York University law professor specifically criticized the $1.5 trillion worth of income tax cuts that President Donald Trump has trumpeted as a key accomplishment of his administration, saying the plan approved in December “benefited the wealthy and worsened inequality.”

Alston, who was commissioned by the U.N.-backed Human Rights Council, built the report around a two-week trip to Alabama, California, Georgia, Puerto Rico, West Virginia and Washington, D.C. He acknowledged that “no magic recipe” exists to end acute poverty.
“At the end of the day, however, particularly in a rich country like the United States, the persistence of extreme poverty is a political choice made by those in power,” Alston wrote. “With political will, it could readily be eliminated.”

Ultimately, he concluded that American democracy is being “steadily undermined” by power-wielders and other vested interests. He decried “caricatured narratives” that elevate the rich to the drivers of economic progress, and stereotypes that paint the poor as “wasters, losers and scammers.”

An official at the U.S. mission to the United Nations in Geneva said Monday that diplomatic staff there had not yet reviewed Alston’s report in full, but that “the Trump Administration has made it a priority to create economic opportunities for all Americans.” The official said the U.S. values the work of U.N. experts “to raise attention to important issues around the globe”

The Alston report is short on recommendations, mentioning only five. One, entitled “Get real about taxes,” insists that most Americans should recognize that “taxes are not only in their interest, but also perfectly reconcilable with a growth agenda.”

Alston also called on the United States to “decriminalize the poor.” He cited the American Civil Liberties Union’s findings that judges in 26 states had issued arrest warrants for alleged debtors at the request of private debt collectors, saying such moves were illegal and violated human rights standards.

Above all, the report’s subtext was how the world’s biggest economic powerhouse neglects its poor.

“The United States already leads the developed world in income and wealth inequality, and it is now moving full steam ahead to make itself even more unequal,” he wrote.

In a telephone interview, Alston said he’s received “a lot of hate mail” since posting a link to the report on his Twitter feed on Friday. His report was only officially flagged by the U.N. human rights office on Monday.

“The way in which people living in poverty are treated across the U.S. system amounts to a violation, in effect, of their civil and political rights,” he said.

“The Trump administration is frantically exacerbating the situation, but it’s true that much of what I describe pre-dated it,” he said.