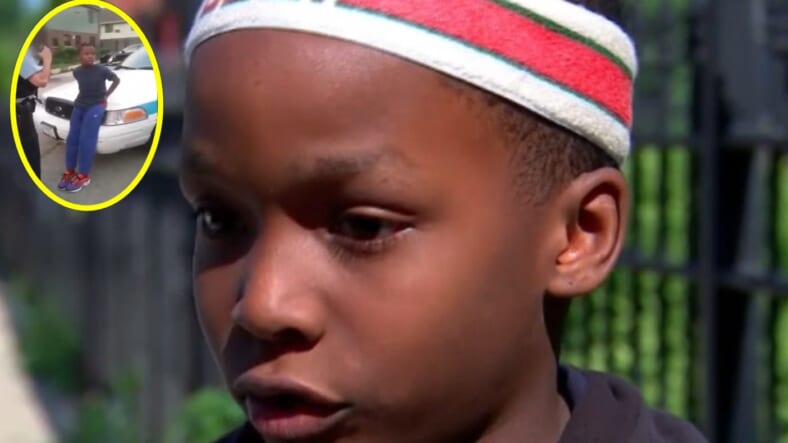 According to Police Superintendent Eddie Johnson, they received a call about a young black male with a gun in the area, and the 10-year-old fit the description to nearby officers.

Authorities have confirmed to WMAQ-TV in Chicago that unfortunately an innocent fourth-grade boy, Michael Thomas Jr., was handcuffed by officers outside his grandmother’s home, then pushed up against the hood of a squad car as police questioned him about possessing a firearm.

Thomas’ family is understandably upset and believe this was a case of mistaken identity, but are also demanding answers about how something like this could escalate so quickly.

The boy’s uncle, Victor, confronted the officers at the scene and can be heard in the clip questioning why his nephew had to be put in handcuffs.

“They’re telling them that someone called them saying that there is a 12-year-old black kid on a bike with all blue on had a gun,” the uncle is heard saying in the video. “There was about five little black boys with all blue on.”

“You can see that he doesn’t have any weapons on him,” she said in the video. “I raised up my grandbaby’s shirt. He don’t have anything on him. Take those handcuffs off of him.”

Witnesses says it took about 15 minutes before the handcuffs were finally removed, but by then the emotional damage to the child’s psyche had already been done.

The video of the incident outraged many on social media.

10-yo black boy playing outside grandmother’s home was wrongfully detained and placed in handcuffs! Chicago police say it was a case of mistaken identity.

Poor kid was so scared that he wet his pants.

These cops need to be held responsible for this.

Many studies have already proven that Black children, particularly Black boys are viewed as older and less innocent than their white counterparts.

According to research published by the American Psychological Association, Black boys as young as 10 are more likely to be mistaken as older, be perceived as guilty and face police violence if accused of a crime.

“Children in most societies are considered to be in a distinct group with characteristics such as innocence and the need for protection. Our research found that black boys can be seen as responsible for their actions at an age when white boys still benefit from the assumption that children are essentially innocent,” said author Phillip Atiba Goff, PhD, of the University of California