A Day Late and Several Dollars Short: Charleston apologizes for its role in the slave trade 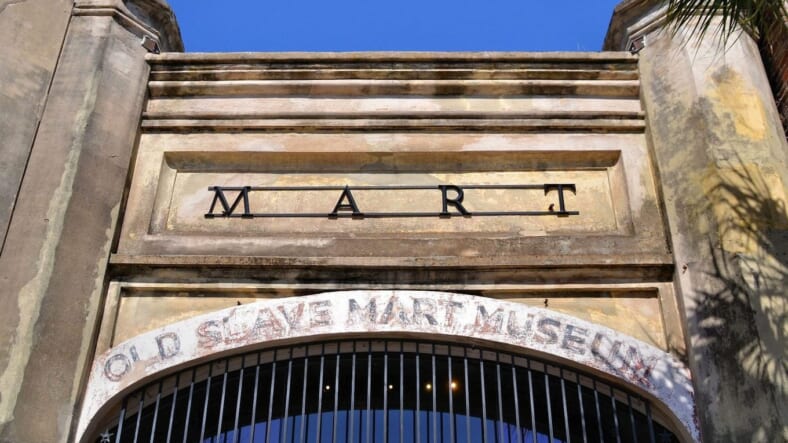 This is believed to be the site of the last slave auction in Charleston, SC.

On Juneteenth, the city of Charleston, SC issued an official apology for its role in the slave trade. The two-page resolution approved by the city council offers not only an apology, but also an explanation of the damage slavery caused to generations of African Americans.

“The institution of slavery did not just involve physical confinement and mistreatment. It also sought to suppress, if not destroy, the cultural, religious and social values of Africans by stripping Africans of their ancestral names and customs, humiliating and brutalizing them through sexual exploitation, and selling African relatives apart from one another without regard to the connection of family, a human condition universal among all peoples of the world.”

Many American cities played important roles in the slave trade, but few quite as vital as Charleston. The National Park Service notes that Approximately 40% of all enslaved Africans brought to the U.S. came by way of Charleston and nearly 80% of African Americans can trace some part of their family tree to this city, according to the International African-American Museum.

As noted in the resolution, Charleston prospered for centuries thanks to the back-breaking, soul-sucking labor of enslaved Black people.

Just one mile from where the Charleston City Council issued its resolution is Gadsden’s Wharf, the port of entry for at least 100,000 Black men, women, and children who would go on to suffer and toil in the oppressive “peculiar institution.”

Charleston’s resolution includes six declarative statements regarding moving forward now that the apology has been issued. No mention of 40 acres or a mule.

a) We hereby denounce and apologize for the wrongs committed against African Americans by the institution of slavery and Jim Crow, with sincerest sympathies and regrets for the deprivation of life, human dignity and constitutional protections occasioned as a result thereof.

b) A commitment is hereby made to promote in all City undertakings tolerance and understanding and equal and fair opportunity for all citizens to prosper, personally and economically, and to encourage others to treat all persons with respect and to eliminate prejudice, injustice and discrimination in our city.

c) A commitment is hereby made to urge all businesses, institutions, organizations, and associations doing business or having activities in the City to strive for racial equality and work for equity in wages, healthcare, housing, and all other aspects of the lives of African Americans.

d) A pledge is hereby given to continue to work with the Charleston County School District to address the quality of education for children in Charleston and in particular those who attend schools within the City of Charleston.

e) A pledge is hereby given to promote an understanding of the contributions of African Americans to the economic success, beauty, and culture of this City by way of historic documentation in City art festivals, museums, public spaces, and monuments and to collaborate with other organizations to memorialize the unmarked cemeteries of Africans discovered throughout the City of Charleston and to reinter their remains.

f) An assurance is hereby provided that the City will seek to promote racial harmony and acceptance by way of initiatives, such as the creation of an office of racial reconciliation, measures designed to educate and accommodate the exchange of ideas among all races and creeds, and to assist in the ever-present process of racial healing and transformation.

READ MORE: America has been splitting up families throughout its history