Today's policies tearing apart migrant families are eerily similar to the way enslaved Black families were handled in this country. 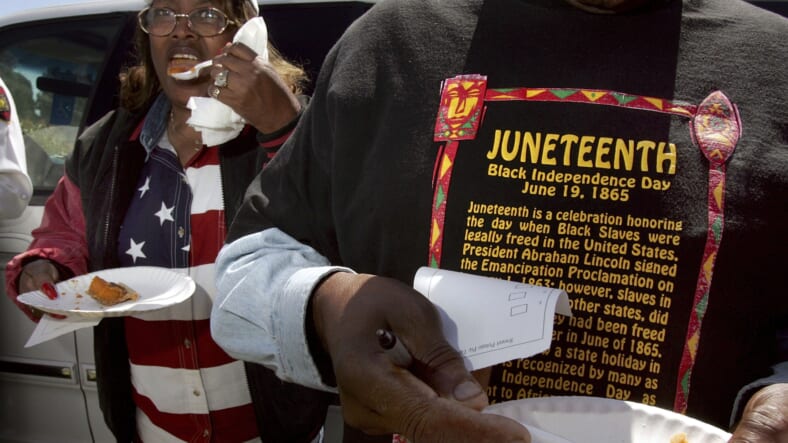 African Americans have always had a tense and precarious relationship with the concepts of freedom and patriotism in the United States. And no holiday makes that point clearer than Juneteenth.

“As a Nation, we vow to never forget the millions of African-Americans who suffered the evils of slavery,” President Donald Trump said in a statement Tuesday attempting to recognize the holiday.

“Together, we honor the unbreakable spirit and countless contributions of generations of African Americans to the story of American greatness. Today we recommit ourselves to defending the self-evident truth, boldly declared by our Founding Fathers, that all people are created equal.”

While Trump may be pretending to recognize the importance of upholding up our constitutional rights, in the next breath his administration continues to enforce his “zero tolerance policy” that has seperated nearly 2,000 migrant children from their detained parents and held them in “temporary shelters,” which resemble prison camps.

Which makes one doubt he even knows the real meaning of today.

READ MORE: Priscilla Renea on why celebrating Juneteenth is more important than Fourth of July

The Origins of Juneteenth

Even though the signing of the Emancipation Proclamation was in 1863, we all know justice has always been delayed for Black people in this country.

As the Civil War came to a close, a large number of people remained enslaved, particularly those living in remote areas. And it wasn’t till June 19, 1865, Maj. Gen. Gordon Granger finally rode into Galveston, Texas, to inform them that President Abraham Lincoln had two years earlier freed the slaves and pressed locals to actually comply with his directive.

The complete abolition of slavery, which became irrevocable later that same year with the ratification of the 13th Amendment, meant the (technical) end of the involuntary servitude, brutality, sexual assaults and torture that often accompanied it.

It also meant that families of marginalized people would no longer be forcefully separated, with scared children being wrenched away from their parents for the profit and convenience of the oppressive authorities.

As one memoirist put it in a surviving slave narrative, the “bitter and cruel punishments … were as nothing to the sufferings I experienced by being separated from my mother.”

Juneteenth has become the most prominent Emancipation Day holiday in the U.S., and marks what should have been the end of policies in this country that are eerily similar to what Trump’s administration is so callously doing right now. Which is why his messaging is not only tone deaf, but also deeply ironic.
The DHS website admits that, “The attorney general directed United States attorneys on the southwest border to prosecute all amenable adults who illegally enter the country, including those accompanied by their children.”
When parents are “referred for criminal prosecution,” as DHS site puts it, their children are then “transferred” and “placed” with the Department of Health and Human Services.
I’ve put those words in quotes because they completely understate what is really happening in border states.

According to CNN, “‘Transfer’ is an altogether too delicate word for what actually happens, as children are either dragged screaming from their weeping mothers or, perhaps worse, taken by the subterfuge of bathing or photographing. ‘Placement,’ is also a euphemism, as nearly 1,500 children have been shunted into a converted Walmart, while plans are afoot to construct a tent city for hundreds more in West Texas.

The inhumanity of this policy is evident even to those who have been charged with implementing it. In an interview with National Public Radio, Ryan Patrick, the top federal prosecutor for the Southern District of Texas, called the situation ‘heartbreaking.’ ‘I have three little children of my own,’ he said. ‘I’m not cold to these issues.’

Nonetheless, Patrick expressed his commitment to strict enforcement, as though he has no alternative. “Well, it is a policy choice by the President and by the attorney general,” he explained. There can be no exceptions for ‘an entire population of crossers just because they come in in a family unit or they have a child with them and we simply ignore them on the criminal prosecution. They’re still crossing the border illegally.'”
The authorities who make statements like the ones above believe basic humanity should be put aside under the guise of following orders, much like the overseers on slave plantations.

“There are those in this society that still hold on to the idea that the Civil War wasn’t about slavery, it was about states’ rights or Northern aggression against slavery,” says Karlos Hill, a professor of African and African-American studies at the University of Oklahoma and the author of Beyond the Rope: The Impact of Lynching on Black Culture and Memory.

“Juneteenth is a moment where we step back and try to understand the Civil War through the eyes of enslaved people.”

It has often been said that when you are not educated on your history you are doomed to repeat it. Which is exactly why this is the perfect time of year to visit visited the National Memorial for Peace and Justice as well as the Legacy Museum in Montgomery, Alabama, both created by the Equal Justice Initiative.

Bryan Stevenson, founder and executive director of the Equal Justice Initiative believes that in order for us to move beyond the legacy and trauma of slavery, we need to acknowledge the ways in which the narratives used to justify it generations ago are still being used to oppress African Americans and other marginalized people today.

And we couldn’t agree with him more.

The end of slavery should be a national holiday with celebrations on par with July 4th. Why isn't it? #Juneteenth2018 pic.twitter.com/tOsP8KUz9E

Juneteenth Should Be A National Holiday: https://t.co/hEe5dI95fJ #Juneteenth #Juneteenth2018 pic.twitter.com/dhwrCn0VbV