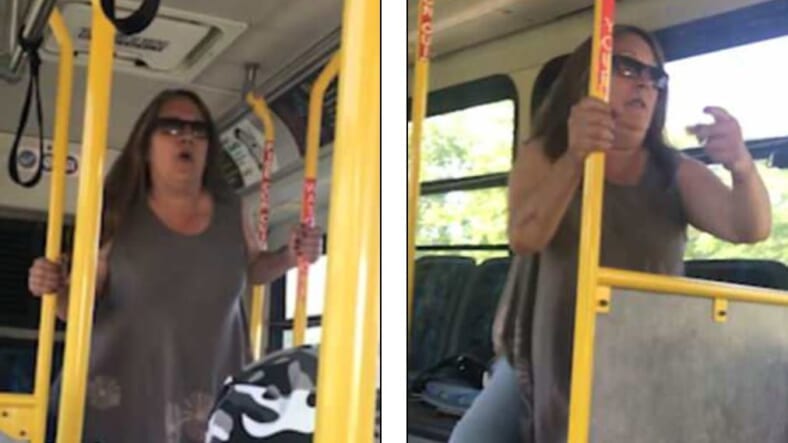 A New York woman hellbent on spewing hate was caught on video yelling racial slurs at passengers on a bus.

The nasty exchange was so toxic that 33-year-old Vladimir Philidore whipped out his cell phone and recorded the belligerent white woman screaming the n-word and targeting people she assumed were immigrants.

Then the woman started to get violent.

As the bus headed through Orangeburg, Rockland County in New York, the crazy lady started verbally attacking the driver, reports the Daily Mail.. She then aimed her hate at unsuspecting passengers telling them “go back to your own f***ing country,” and asking them if they “had their papers.”

She was “just going at the mouth, with the racial slurs, the N-words,” Philidore said.

“I’m sick of you motherf–kers! You got papers to be in this country?” she says, standing toward the back of the bus and holding onto a pole.

Another passenger Zoe Mac, was on the bus and posted a video of the woman’s racist tirade with the caption: “Ignorance at its finest… racism never died and this is what people like me and who can relate go through…,” he captioned the video.

In the video, the combative woman tells someone to “go back to your f–king country.”

Then once the woman realized that she was being recorded by Philidore, she tried to attack him too.

“She tried to knock the phone out my hand and she started choking me,” he told PIX11 News.

“Yesterday some unhinged racist went on a mini-rampage of sorts on a Transport of Rockland bus as it was passing through Orangetown, creating a disturbance by physically and verbally attacking passengers and the bus driver,” wrote Orangetown Town Supervisor Chris Day in a Facebook post.

The crazy yelling commuter was arrested for disorderly conduct.