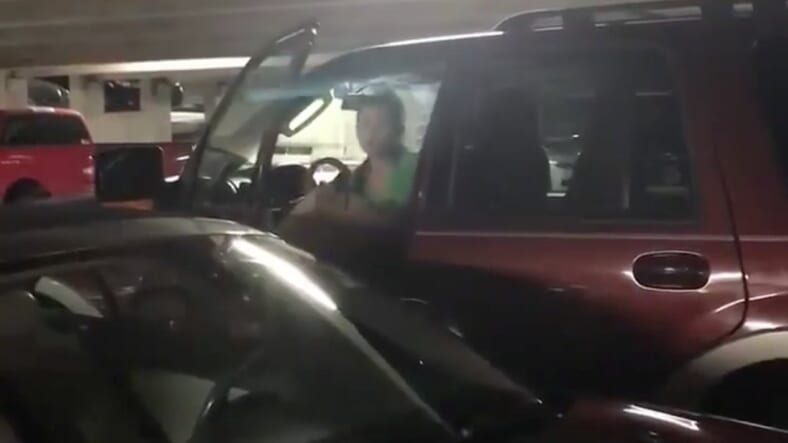 White women are obviously bored with their bland lives because here comes yet another case of a white lady calling 911 on a Black woman—this time for the major offense of smoking a cigarette.

You just can’t make this stuff up.

Thankfully the young woman’s mother Stacy Etheridge was on hand to record the racist encounter. She posted a video of her daughter’s interaction with a white woman who was harassing her about smoking in the parking deck of their apartment complex in Wellington Manor, Georgia.

The Root reports that Etheridge uploaded the video with the caption: “Caucasian woman tells my daughter to put her cigarette out and decides to call the police on my daughter for smoking outside in a parking deck. Police showed up and said it was no harm to others….this calling the cops on Blacks is getting way out of hand. Now you can’t smoke outside. #NewportNancy”

#NewportNancy was probably on her way for a swim with #PoolPaula before heading to the park to meet up #BBQBecky. That’s the only thing that seems logical here.

The daughter who has not been named confronts the nosey lady:

“You said I can’t smoke here? You’re gonna have me kicked out? That’s what you said?”

#NewportNancy replies, “They will have you evicted for smoking on the property. I hope you’re recording it, and I’mma let Jessica and everybody else know in the office.”

“You just came out here harassing me for no reason,” the woman says.

“For smoking on the property,” #NewportNancy replies.

The woman gets in her vehicle and makes a phone call.

“Yes, ma’am there’s um, there’s a resident here who claims she lives here that’s smoking in the parking garage by the stairwell,” she says loudly on the call.

It’s a sad state of affairs.

White women should know by now that poking their nose where it doesn’t belong can have dire consequences because Black Twitter remains undefeated.

Stephenie Sebby-Strempel learned that important lesson the hard way that being racist has serious consequences.

The woman who made headlines last week for assaulting Black teens and telling them they didn’t belong at the pool has reportedly been fired from her job.

Sebby-Strempel, aka #PoolPatty, was an independent consultant for the major skincare brand Rodan + Fields, but no more, reports Blavity.

The company released a statement distancing itself from the racist woman who assaulted a teen at Reminisce neighborhood pool in Summerville, South Carolina, on June 24.

Internets sleuths will find out soon enough who #NewportNancy is.