Why a Howard Univ. professor filed a lawsuit against the Dominican Republic’s president for humanitarian atrocities against Haitians

"Anyone who is Black should care about Haiti." -Professor Nikongo BaNikongo, Ph.D. 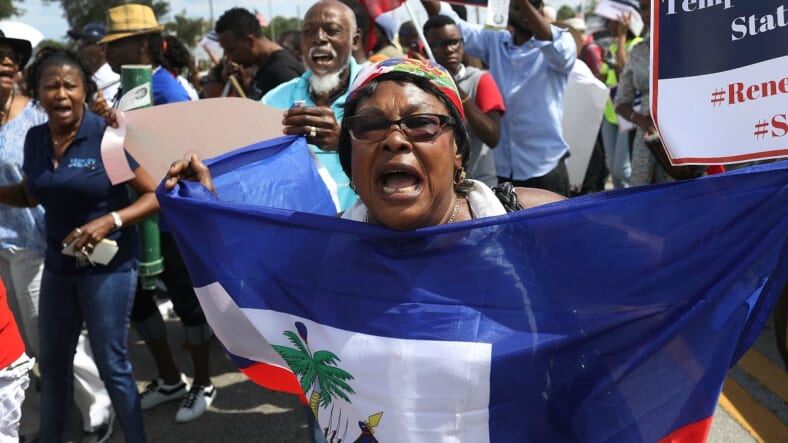 Divisive, ugly and flat out racist, the anti-immigrant rhetoric and policies that currently exist in the Dominican Republic are the stuff that Trump’s wet dreams are made of – and one professor at Howard has had enough.

Last month, Howard University African American Studies Professor Nikongo BaNikongo, Ph.D., filed a lawsuit in the International Criminal Court (ICC), located in Hague, Netherlands, on behalf of Haitian sugar cane-cutters in the Dominican Republic who have been denied residency for themselves and their children born in the country.

In recent years, controversial court rulings have caused hundreds of thousands of Dominicans of Haitian descent to be stripped of their citizenship and their basic civil rights.

The decision has prompted an outcry from human rights groups and calls to boycott Dominican tourism, but Dr. BaNikongo believes Haitians need more than just a travel boycott to get the justice they deserve.

READ MORE: Pregnant woman arrested for a traffic violation says she was beaten while shackled by Jacksonville sheriff

The complaint he filed seeks to hold Dominican Republic President Danilo Medina Sanchez, criminally responsible for this injustice and asks that Sanchez be investigated for “Crimes Against Humanity stemming from the mass expulsion of Haitians and failing to exercise due diligence in securing the rights of Haitian workers in the DR.”

In an exclusive interview with theGrio, BaNikongo spoke about what he hopes to accomplish with the lawsuit, why African Americans in the U.S. should be paying closer attention to this issue and what the story of Haiti can teach us all about the steep price of freedom and pro-Blackness.

With tensions riding high on domestic soil, many Americans aren’t necessarily concerned with the atrocities pervading foreign countries, especially not while Donald Trump is wreaking havoc in their own backyards.

But the professor thinks that mindset is not only narrow-minded, but also dangerous.

“Anyone who is Black should care about Haiti,” BaNikongo explains “They were the first independent Black republic and that achievement was important for all of us because it set the stage for African movements around the world. Haiti is exemplar in terms of the liberation of Africans and the fight against exploitation and colonialism. It is important to me as it should be important to all of us.”

While we are witnessing the absurd demonization of immigrant people under the Trump Administration today, BaNikongo wants us all to understand this kind of behavior already exists in other countries around the world, particularly in the Latin American and Caribbean nations right next to us.

And the reason why is both simple, and ugly.

Let’s call this what it really is

In September 2013, the country’s Constitutional Court ruled to retroactively deny any Dominican citizenship to anyone born after 1929 without at least one parent of Dominican descent.

This move means that the DR now has a huge population (an estimated 250,000 people) who are considered “illegal citizens” even though they were previously considered law abiding citizens who had contributed to the country.

To add insult to injury, BaNikongo says the government has yet to provide a reasonable way for people of Haitian lineage to respond to this ruling and establish residency in the Dominican Republic.

This arbitrary and blatantly unjust move to suddenly make what is considered the Blackest group in the country illegal, with no reasonable justification as to why, amounts to one thing: good old fashioned ethnic cleansing.

As non-citizens, Haitian workers now lack the rights to healthcare, and can’t even do basic things they used to do like opening up a bank account or seeking proper education for their children. 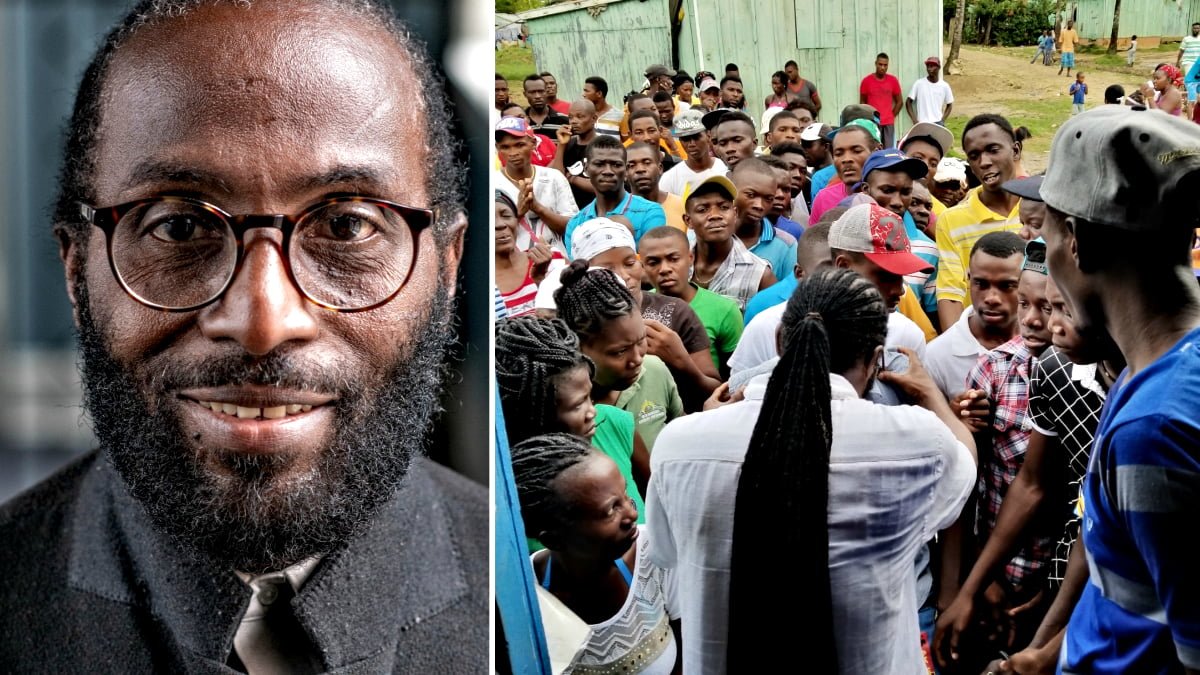 Dr. BaNikongo with a group of Haitian sugar cane workers in the Dominican Republic.

In 2015 the head of the nation’s immigration agency, Army Gen. Ruben Paulino confirmed that his forces would begin patrolling residential areas known for having a high population of migrants and round them up in deportation sweeps that mirror what ICE has recently started doing under the Trump administration.

While the Haitians are being rounded up like cattle in the streets, the same way propaganda was used in Nazi Germany to sway public sentiment, hate filled anti-Haitian, anti-Black rhetoric is also being played on the radio to dissuade anyone from feeling compassion towards them.

“The influx from our poorer neighbor is overwhelming. They steal jobs. They are dangerous. They take advantage of our laws.” – These are the types of messages that Dominicans are hearing in the mainstream day in and day out until it feels acceptable and normalized to turn a blind eye to the situation.

It’s gotten so bad that people with overtly Black features have been harassed, murdered and even lynched.  Haitian bodies are left swinging from trees as a warning to the rest of the community.

Americans are no strangers to lynchings and have seen this tactic used especially during  slavery and the Jim Crow era. But in our country it’s often white people lynching Black people. In the Dominican Republic however, it is Black people who’ve been taught not to see themselves as Black, attacking those who could very well share the same bloodline.

“These people are being exploited for no other reason than their ethnic composition,” explains BaNikongo.

“They are being subjected to the most derogatory conditions that one can imagine. Yet despite all of that, I have been impressed by their persistent hopefulness. They still work very hard to obtain the things that they want. They still continue to believe that something good is going to happen for them. We can not forget that these people are still human beings. They have lives. They have families. We need to feel their suffering and understand that it can be stopped with our help.”

Historically speaking, this isn’t the first time that the Dominican Republic has attempted an ethnic cleansing. In 1937, Dominican dictator Rafael Trujillo ordered millions of Haitians to be massacred, based on their pronunciation of perejil, the Spanish word for parsley.

If you rolled your r’s the white Spanish way you were fine, but if you pronounced your r’s the French way, they took that to mean you had Haitian lineage and deserved death. Thanks to what amounts to the Latin American version of “the brown paper bag test“, an estimated 20,000 people died in the Parsley Massacre, many of them Dominican families.

In fact, the greatest irony in all of this is that Haitian and Dominican blood is so intermixed, that despite being fair skinned, Trujillo himself was widely reported to have a Haitian grandmother. A fact he often tried to disguise.

According to a 1999 article by the historian Samuel Martinez, in the 1930’s the self-loathing dictator also eliminated the option to identify as “Black” on national identity cards, leaving Dominicans no choice but to describe themselves as either “white” or some variety of “Indian” — meaning “indigenous.”

THIS is why so many Dominicans to this day have a hard time identifying as Black people despite what they see in the mirror. Their great, great, grandparents were literally forbidden from identifying that way.Trujillo repeatedly told his countrymen that anything Black was inferior, and since Haitians are notoriously pro-Black that made anti-Haitian sentiments and widespread hate crimes against them easier to accept.

“I suppose when one hears ‘crimes against humanity’ what comes to mind immediately is massacre and genocide like the kind that we saw in Rwanda, Liberia, Sierra Leone or Holocaust, Germany,” admits BaNikongo.

“But in reality a crime against humanity is defined as a widespread and systematic attack against a civilian population, and that’s exactly what we have here! In the case of Haitians in the Dominican Republic, what we see is an attempt at deportation and forceable transfer to a territory that for many of them is unfamiliar and unknown.

What we see is a persecution of Haitians based solely due to their race and ethnic background. And there is a constant de-prioritization of their residency rights and flat out denial of their citizenship rights.

All those systematic attacks easily meet the requirements for a crime against their humanity in international law, more specifically the 1998 Rome statute.”

While some may call the lawsuit a long shot, BaNikongo has a clear vision of the impact this case could have even outside of the court room.

“We want President Danilo Medina Sanchez to be held liable for directing these heinous policies and doing nothing to forestall the limitations of rights to these people,” he explains. “We probably have a 50/50 chance of making that happen, but our greater objective in filing this lawsuit is to put the Dominican government and the president on notice and hopefully pressure them to ease up on the inhumane barriers that they’ve set up against these innocent Haitian people, so they can have rights, legally.”

How can we help?

Systemic racism can often feel like an overwhelming thing to combat but BaNikongo wants readers to know that there are realistic and tangible ways they can help make things better.

“We want to increase the campaign of pressure by sending messages to the Dominican embassy here in Washington, D.C. in the very same way that we did in the 1990s against South Africa. Because this is where it started,” he points out. “The campaign of African Americans in the United States is in large measure what brought an end to apartheid to South Africa. The international pressure from here in the U.S. can literally have a life-changing impact on policies that oppress Black people everywhere.

Also – we’re in the process of filing out residency rights applications on behalf of the Haitian community and its an extremely expensive endeavor. It costs $300 per application and that is a cost we bear because no one down there can afford that. So we need financial support where and when we can get it.”

If you want to help Dr. BaNikongo team directly you can make a donation to SungaSunga.org

If you want to visit or contact the Embassy of the Dominican Republic about this issue, they are located at: