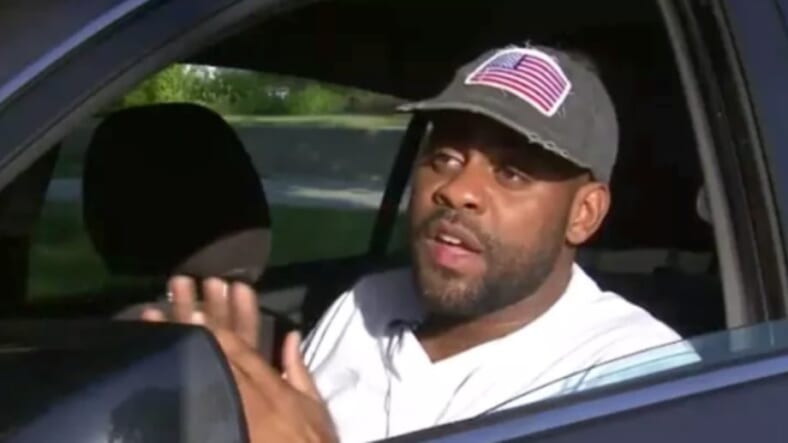 Ezekiel Phillips says he was peacefully chilling out in his car listening to a yoga CD when a white woman rolled up on his vehicle ready to start a world full of drama.

Phillips told Fox 11 that he had just dropped someone off in Long Beach, California, and decided to take a 30-minute break before going to his yoga class around the corner. As he was listening to his Bikram yoga CD, the woman confronted him by walking up to his car.

“You’re not supposed to be here. This is a good neighborhood,” Phillips alleges the woman told him.

“At that moment I’m like, ‘Wait, hold up. Have a good day, ma’am. Namaste.’ And I rolled my window up,” he told the news station.

However, things quickly escalated as the woman started taking pictures and recording him.

“She took her phone out; started taking pictures, filming doing whatever she was doing … So I got out the car, I started filming her as soon as I start filming her [she started screaming], ‘What are you doing?’ Leave me alone! I’m feeling threatened. Help! Help!’ It was one of those,” Phillips explained.

The woman ultimately ended up calling the Long Beach police and the news station obtained the 911 audio.

“I noticed him two houses up from my parents’ house and I’m like, you know and he’s waving to me. I don’t know who he is.“

She added, “I go ‘why are you sitting in your car in our neighborhood? And he goes ‘I’m resting’ and I’m like you weren’t two blocks back’”

Phillips got out of his car at this point to listen to what she had to say.

Phillips decided it was best not to flee the scene.

“I thought about it. ‘If I leave, it’s looking like I’m guilty of whatever she’s talking about.”

Neighbors in the area like Kelly Odom were appalled by the incident and agree that it is clearly racially motivated.

“We all don’t feel that way,” Odom said referring to the other white people who live in the neigborhood.

“I don’t think if somebody were white sitting in the car, somebody would have called the police. I don’t. I don’t,” she conceded. “I think it’s horrible. It’s acting ‘Trumpish’. It’s okay to be a racist and it’s not.”