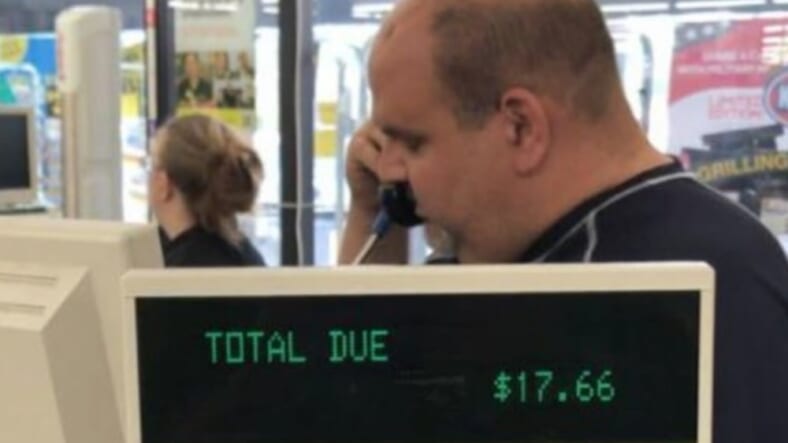 A New York woman who tried to use multiple money-saving coupons at Dollar General had the police called on her by a white male worker who said she was “trying to take advantage of the system.”

Teacher Madonna Wilburn of Buffalo, New York recorded the incident after the clerk refused to complete her order for $30 worth of groceries and had at least $15 in savings when a manager identified as Ken Dudek refused her coupons, Yahoo reports..

“PLEASE SHARE….So here is, unfortunately, another incident where the manager at Dollar General on Genesee Street in Buffalo New York felt he needed to call the police on a ‘black women’ ME who was taking advantage of the coupon system,” Wilburn wrote on Facebook. “I had no coupons in my hand and they are all digital coupons on their app. Spend $30 on gain scents and receive $ 5 off then other digital coupons ranging from .50 to $2 off of each of these items all on their app. He could not figure it out. Told me he hate people like me, told me to shut up, and more. I eventually pulled out my phone….and started recording to protect myself against his nasty attitude in case anything happened.. now him and his wife inboxing me.”

The agitated worker Dudek told Wilburn as she tried to complete her purchase:

“Just trying to take advantage of the system, is what you’re doing, and I don’t have to do it if I don’t want to.”

Dudek denies saying that. He continues: “I’m trying to do the best I can, you already got $15 off of these products and you’re trying to play games. We’re done — I’m giving you my boss’s number. She can fix it from here, OK? I’m really done with you. I’m tired of the attitude and tired of the nonsense.”

“OK, Ken,” Wilburn replies. “I will deal with her but you said you don’t like people like me, meaning…a couponer?”

Once Dudek realized he was being filmed, he said: “Well you don’t have my permission to record me. You can’t record me,” he then makes a phone call.

This Black woman had the police called on her by a store clerk because she used too many coupons pic.twitter.com/kzAKcTV8Jl

“I have a customer who is being difficult and taping us without permission,” he says into the phone. “And I’d like you to dispatch the police if possible. Black female, green shirt, blue shirt.”

The video has caused widespread backlash on social media and many quickly pointing out the hypocrisy of white women being awarded for being expert couponers while black women are chastised for trying to beat the system by saving a buck.

Comedian Anthony Moore called out the hypocrisy of white people calling the police on blacks saying:

“There are reality shows featuring white women blissfully taking advantage of the coupon system. Never heard of the cops being called. Interesting.”

There are reality shows featuring white women blissfully taking advantage of the coupon system. Never heard of the cops being called. Interesting.

And then he followed up with a picture of an extreme couponer’s storage.

That’s the one. Wonder if the owner of this warehouse of junk ever had to handle the fuzz. pic.twitter.com/L7JN1Rzx6M

Another person online noted the obvious.

He said she was taking advatnage of the system. Meanwhile suburban white women have an entire tv show dedicated to their extreme couponing. If her name was Karen and she was blonde he would have congratulated her on saving so much money.

“He said she was taking advantage (sic) of the system. Meanwhile suburban white women have an entire tv show dedicated to their extreme couponing. If her name was Karen and she was blonde he would have congratulated her on saving so much money.”

Dollar General said they are conducting an investigation and released this statement:

“Dollar General is committed to helping American families stretch their budgets. As part of that commitment, we encourage customers to utilize both digital and manufacturer coupons to help them save money off our everyday low prices. We always strive to deliver the best possible customer service and we are disappointed when this does not occur. We take matters like this very seriously and are fully investigating the incident.”

Meanwhile Dudek’s family seems to be harassing Wilburn online. Wilburn, who is a mother of four children and was voted Teacher of the Month, shared a screenshot with comments from Jennifer Dudek, which said her brother is “not racist, he’s just frustrated with the job in general.”

Wilburn said she believes she was racially profiled and said there was definitely more that happened.

“What the video didn’t capture was this man telling me to ‘shut up,’ and ‘I hate people like you.’ Did he mean women? Black women? People who coupon?’”