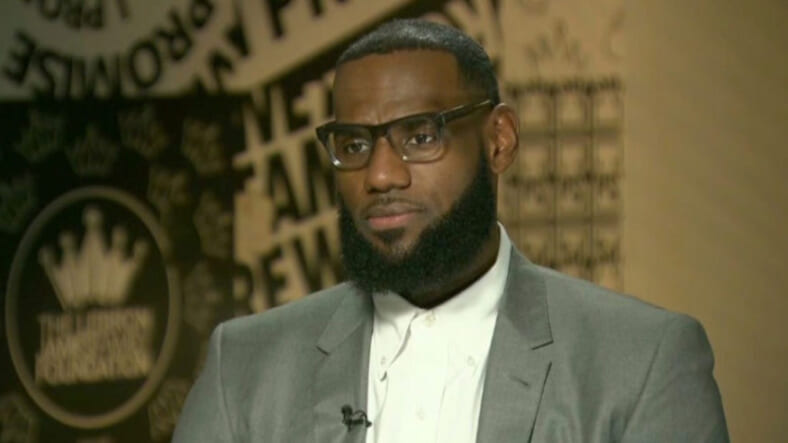 Lebron James took to Twitter to express outrage toward the brutal beating of a Black teen by Florida police.

Ahead of the opening of his new school in Ohio, LeBron James opened up to CNN’s Don Lemon about why he believes President Donald Trump uses divisive scare tactics to divide and conquer the country.

Trump has been a vocal critic of the NFL and slammed the league for allowing players to kneel in protest of police brutality during the national anthem and use their platform to raise awareness about discrimination against people of color.

“One, because I believe our president is trying to divide us… he is, he’s dividing us and what I have noticed over the last few months is that he’s kind of used sport to divide,” James admitted in the CNN interview

Trump’s loud and often unhinged criticism of the NFL has split the country with many calling for the NFL to stand by its players, while others have sided with Trump arguing that players should be thankful for what the flag stands for.

“When you’re part of sports, it brings so much comradery and so much fun. We are in a position right now, in America more importantly, where this whole race thing has taken over,” James said.

“At times… more often than not, I believe he uses anything that’s popular to try and negate people from the positive things they could be doing,” he said. “At the end of the day sport is why we all come together.”

This isn’t the first time James has spoke out against Trump.

When the Golden State Warrior won the NBA Finals a few years against and his rival teammate Stephen Curry said he didn’t intend on going to the White House to shake hands with Trump, the President tweeted back that Curry and the Warriors were no longer invited. That pissed James off.

“U bum @StephenCurry30 already said he ain’t going! So therefore ain’t no invite. Going to White House was a great honor until you showed up!” James tweeted.

And when Lemon asked James if he’d sit down with Trump for a talk, he stood firm on his opposition.

Being advocate for race matters, does matter to James. He also spoke about Trayvon Martin’s 2012 murder and connected to causes that propels you into involvement.

“It starts with the Trayvon Martin situation and the reason it starts with that, I believe, is having kids of my own, boys of my own, it hit home for me to see and to hear the story. To think if my boy left home and he never returned—that hit a switch for me,” he said.

Schooling the next generation

Yesterday LeBron James had first day of school jitters as he prepared for what was sure to be one of the greatest and most significant moments of his life.

The LeBron James Family Foundation and the Akron (Ohio) Public Schools teamed up to launch a new elementary school for at-risk children in his hometown of Akron, Ohio, according to ESPN.com.

The jitters before the first day of school are real right now!!! Tomorrow is going to be one of the greatest moments (if not the greatest) of my life when we open the #IPROMISE School. This skinny kid from Akron who missed 83 days of school in the 4th grade had big dreams… https://t.co/PwmRaHRfng

@KingJames 3rd graders are reciting the #IPROMISE for the first time in their new home with Principal Davis! ❤️? #WeAreFamily pic.twitter.com/Gitytnq31t

James has arranged for students who complete the program to receive free tuition to the University of Akron starting in 2021. He also created a supplemental program for the parents who send their children to The I Promise School to help them return to complete their high school educations if they have not already done so. Lastly, there’s also a separate institute to help prepare high-school-age students for college.

The LeBron James Foundation hopes to have more than 1,200 children pass through the program and into college by 2029. And Sunday, the NBA mega-star posted a video on his multimedia platform UNINTERRUPTED talking about the opening of the school and explaining why his move to Los Angeles to play for the Lakers is a “dream come true for me.”