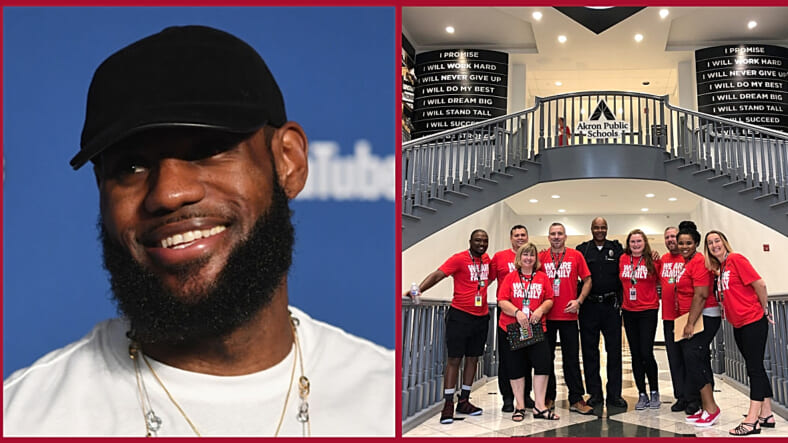 LeBron James, the LeBron James Family Foundation and the Akron (Ohio) Public Schools are teaming up to launch a new elementary school for at-risk children in his hometown of Akron, Ohio. (Photo by Jason Miller/Getty Images)

LeBron James has first day of school jitters as he prepares for what is sure to be one of the greatest and most significant moments of his life.

This week, the LeBron James Family Foundation and the Akron (Ohio) Public Schools are teaming up to launch a new elementary school for at-risk children in his hometown of Akron, Ohio, according to ESPN.com.

James has previously shared that his life was turned around between fourth and fifth grades, thanks to the intervention of Frank and Pam Walker. In 1993, the Walker family took James in and encouraged him to focus on his education at a city school in Akron. Now, he is making sure that he does the same for children who need a similar opportunity to succeed.

Monday, the new school, which will be in session all year round, open it’s doors as 30 major media outlets descend upon Akron just to see LeBron James cut the ribbon. IPS is committed to enrolling 240 elementary students who are failng academically behind their peers. James has donated millions to the project himself while also securing financial benefactors from corporate and educational sponsors.

Because the the I Promise School has a longer school day and school year, more than 40 staff members have been recruited to accelerate the development of children who qualify for the program based on performance and socioeconomic factors.

The jitters before the first day of school are real right now!!! Tomorrow is going to be one of the greatest moments (if not the greatest) of my life when we open the #IPROMISE School. This skinny kid from Akron who missed 83 days of school in the 4th grade had big dreams… https://t.co/PwmRaHRfng

@KingJames 3rd graders are reciting the #IPROMISE for the first time in their new home with Principal Davis! ❤️? #WeAreFamily pic.twitter.com/Gitytnq31t

James has arranged for students who complete the program to receive free tuition to the University of Akron starting in 2021. He also created a supplemental program for the parents who send their children to The I Promise School to help them return to complete their high school educations if they have not already done so. Lastly, there’s also a separate institute to help prepare high-school-age students for college.

The LeBron James Foundation hopes to have more than 1,200 children pass through the program and into college by 2029. And Sunday, the NBA mega-star posted a video on his multimedia platform UNINTERRUPTED talking about the opening of the school and explaining why his move to Los Angeles to play for the Lakers is a “dream come true for me.”

Check out the segment below.