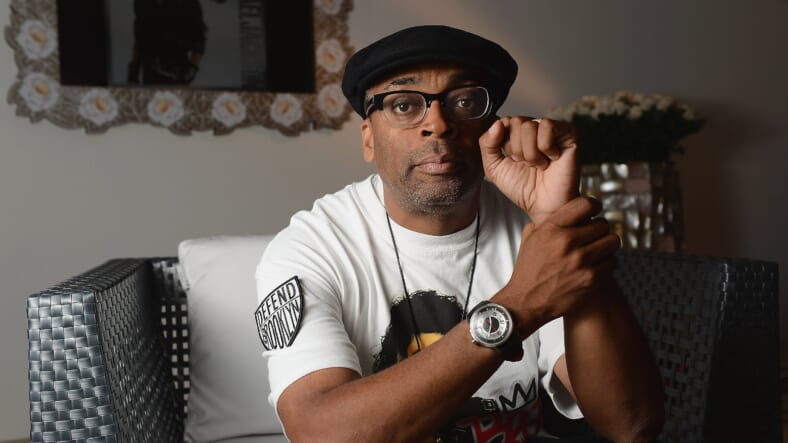 Legendary film director Spike Lee says living in the era of President Donald Trump is a very dangerous situation for Americans who care about racial equality.

While promoting his new film “Blackkklansmen,” the critically acclaimed true story of the first black police officer to integrate the Colorado Springs Police Department, Lee told theGrio that white supremacy is no joke:

“We’re in a very serious, dangerous time here in America with Agent Orange and his cronies, who are lying through their teeth and who every day kneel on bent knee before the altar of the almighty dollar,” says Lee.
“That’s all they care about. I think these guys would put their mother on the corner if it came to that. That’s how amoral I think they are.”
Lee says the release of his film on the one-year anniversary of the deadly Charlottesville protests is no coincidence.
“There is a thing called American, home-grown terrorism,” says Lee.  “What we all witnessed in Charlottesville was an act of American terrorism. Heather Heyer should be alive today.”
“Susan Bro should have her daughter. And we all saw this. Anytime something happens in America, you look for your president to speak on it and what did he say? ‘There are bad people on both sides.’ Now that’s some bullsh*t.”
Lee also gave thanks to “Get Out” director Jordan Peele for bringing the story of the pioneering police officer, Ron Stallworth, to his attention.
“Blackkklansmen” hits theaters August 10.
Watch Spike Lee’s advice for young creatives trying to break into the business below.