The two Black teens who were with him are still awaiting trial. 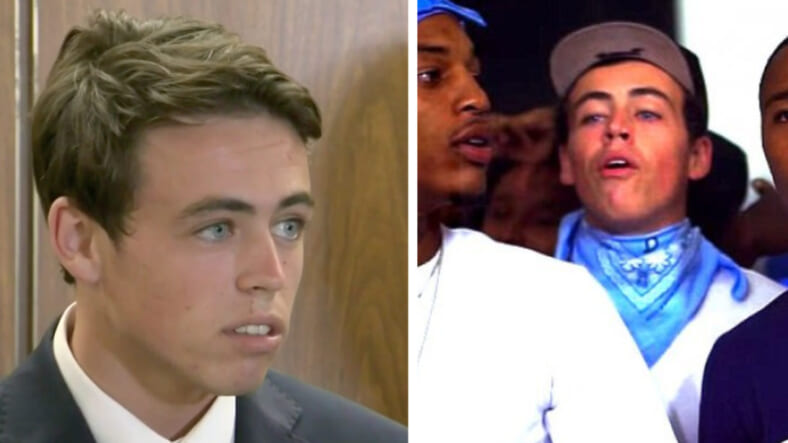 A wealthy white California teenager who joined the infamous Crips street gang was recently acquitted of a first-degree murder charge in connection with him being the get-away driver in a fatal drive-by shooting.

Cameron Terrell, 18, drove two of his fellow Rollin’ 90s Neighborhood Crips gang members into rival territory on October 1, 2017 in Los Angeles. According to witness testimony, the two teenagers (both minors) shot and killed 21-year-old Justin Holmes who had told the teens he was not gang affiliated.

Terrell was arrested days after the shooting when surveillance video showed the two teen shooters getting into a black Mercedes owned by Terrell’s father, media executive Donald Wayne Terrell. Subsequently, Terrell was released for $500,000 on his $5 million bond.

READ MORE:‘All I did was be Black’: Smith College employee calls cops on Black student eating lunch on campus

During the trial, prosecutors tried to convince a jury that Terrell provided transportation to what he knew would be a shooting. They also tacked on two counts of attempted murder for the two men who had been standing next to the victim Justin Holmes, but managed to get away unscathed.

According to CBS2, prosecutors also showed video Terrell recorded of his friends knocking over candles at the makeshift memorial created for Holmes. In addition to that, they rolled out numerous social media posts Terrell made referring to the Crips, including music videos where Terrell can be seen throwing up the Crips gang signs.

After 10 days of deliberation, the jury proved to be unconvinced of the prosecution’s claims, acquitting Terrell of all charges.

Terrell’s attorney, Jovan Blacknell, successfully made the case for his client. “Cameron Terrell did not possess any weapons, he did not shoot anybody, he was not part of any conspiracy, or any plan or plot. … At best the evidence suggests that Cameron was a witness,” said Blacknell.

The defense attorney also said that Terrell thought the trio was merely going to paint graffiti, not shoot anyone. According to him, Terrell had befriended a few Crips gang members, but was not officially part of the group himself. Blacknell also dismissed the plethora of social media posts Terrell had placed online about gang life as a “fantasy world,” a way of life he was enamored with and merely documenting, not participating in on any level.

At a press conference after the verdict was announced, Terrell spoke out in his own defense, saying that he doesn’t owe anyone an explanation.

“Rest in peace, Justin Holmes, you shouldn’t have gone that day.[…] I pray for his family every night. This has been weighing on me every single day of my life,” Terrell added.

The two Black minors with Terrell during the drive-by are still awaiting trial.

“Two black juveniles are probably facing life sentences to where an adult took them to do something where he should’ve been held responsible just as much,” said community activist Melvin Farmer in an interview with CBS2.

Terrell’s attorney said his client is headed to Texas to study law at the University of Houston.