Cheerleaders with a collar: An open letter to the Black preachers stunting for Donald Trump 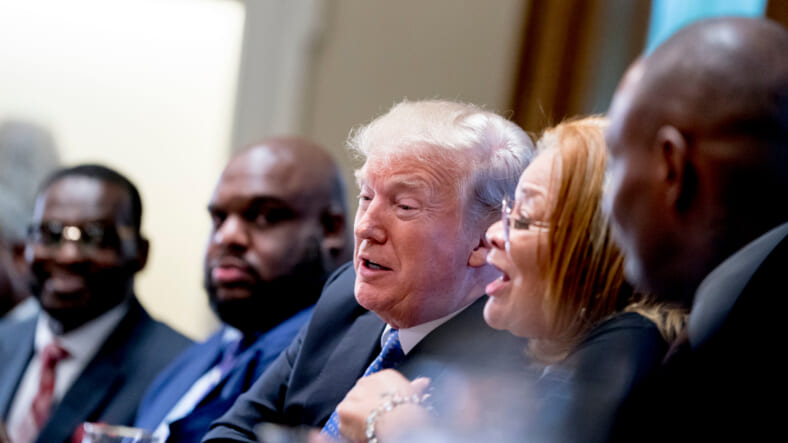 Last Wednesday, several Black pastors met with Donald Trump behind closed doors at the White House in yet another attempt to bridge the gap between the President, his administration and the African-American community. This time, the discussion centered on prison reform. Several facts were determined from that meeting, including that Trump continues to poll in low satisfaction numbers amongst Blacks voters and that Black Twitter has a long memory, doesn’t forgive easily and aims directly for the jugular when Black folks, particularly preachers, start supporting Trump.

The voice of the Black pastor is typically omnipotent, particularly when it’s tied to a political agenda. In this case, however, sentiments from Rev. Darrell Scott, pastor of New Spirit Revival Center in Cleveland, Ohio and Rev. John Gray, pastor of Relentless Church in Greenville, S.C., (who were both in attendance) were swiftly met with vicious criticism about their ability to comprehend that this President has traditionally ignored our opinions and does not care about the issues that continue to disproportionately plague Black Americans.

In the letter below, delivered exclusively to theGrio, several well-known, Black pastors have come together to collectively rebut their fellow sisters and brothers in Christ. Below are their thoughts on why Donald Trump is the most divisive leader our country has ever witnessed and how Trump’s Black pastors have completely lost touch with their spiritual and cultural connections.

With heartbreak, yet hope, we reach out to you in the name of our Lord and Liberator, Jesus, the Christ. It was unsettling and upsetting to witness the meeting with you, our moral leaders, and one of the most amoral persons to ever occupy the White House in the name of discussing prison reform.

We are sure it must have been intoxicating to walk the corridors of power and sit at the table of governing authority. Unfortunately, those precincts of power have been infected by white supremacy and moral bankruptcy. Dr. Cornel West is correct, “we are in the spiritual eclipse of decency, honesty and integrity,” leaving our nation in the chaotic shadows of emboldened racism, ugly xenophobia, predatory patriarchy and unvarnished greed.”

Given your proximity to power and your “seat at the table” in this toxic, political climate, it’s painfully disappointing that instead of being prophetic clergy persons you became presidential cheerleaders. We could never imagine the eighth century prophets cheering the kings of Judah and Israel who were in similar political climates. We know John the Baptist wasn’t content to cheer Herod on and express his gratitude and honor for a seat at the table, declaring that Herod was the most “pro-Jewish king in our lifetime.”

We need not remind you of the posture of the Prince of Peace, our Savior from the streets, when He stood before Herod and Pilate. He didn’t even pray for them. Dr. Martin Luther King, Jr was quoted yesterday but not emulated. Dr. King had a seat at the table at the White House, but he brought the menu of a civil and voting rights agenda to Presidents who transformed the nation.

PASTOR’S PRAISE: At a meeting with inner city pastors, Darrell Scott of Ohio tells Trump he is “the most pro-black president” is recent history who “actually wants to prove something to our community.” “The last president didn’t feel like he had to,” Scott told the President. pic.twitter.com/gyFJNN71Qg

It was errantly exclaimed that “this is probably going to be the most pro-Black president that we’ve had in our lifetime…” Were the fumes from the intoxicating toxins that strong? Was he being pro-Black while building his political platform as the number one purveyor of birtherism, which was fueled by racism? Is it pro-Black to label Black NFL players protesting racial injustice in the criminal justice system you were there to reform, “SOBs?” That’s what your pro-Black president did. Was he at his pro-Black finest and most eloquent when he referred to countries of color as “s-hole countries?”

Was he being pro-Black when he equivocated during the white supremacist rally and violence in Charlottesville, that left one person dead and more than a dozen injured, declaring there were “very fine people on both sides?” Was he pro-Black when he appointed a white supremacist, Jefferson Beauregard Sessions (who was deemed too racist to be a judge by a bipartisan panel and Coretta Scott King) to serve as Attorney General? Did your cheerleading blind you to the fact that the policies of Sessions contradict and overrule the prison reform you were cheering for? Attorney General Sessions wants to stall a federal review of police departments where racial profiling, excessive use of force and racially discriminatory police practices have been exposed.

During the Obama Administration (who was disparaged during the meeting to the delight of 46-1), the Justice Department began 25 investigations into police departments and sheriff’s offices and resolved civil rights lawsuits filed against police departments in more than 15 cities. Sessions is stopping and reversing these investigations and consent decrees. Were you cheering for Trump and this Justice Department to continue to ignore the broken body of Freddie Gray in Baltimore, the last gasps of Eric Garner in New York, the slain body of Michael Brown in Ferguson, the aborted life of Tamir Rice in Ohio and so many others? Are you cheering for his “law and order” dog whistle calls that encourage over policing and underserving of our communities? You do know his attorney general also has plans to restart the “War on Drugs,” which was really a war on Black and Brown communities!

We are sure you recognize the importance of judicial appointments in criminal justice and prison reform. The president you cheered for contradicts real reform with his appointments of judges. While purporting to be concerned about prison reform and the negative effects of mass incarceration on communities of color, Trump’s actions demonstrate a blatant disregard for the welfare of people of color by pushing judicial nominees with disturbing records on racial equity issues into lifetime positions as judges, which will have ramifications in the lives of people of color long after he has left the White House. Of the 87 judicial nominations Trump has made, 80 are whites who have made careers in undermining civil rights, while only one is African-American.

READ MORE: Black pastors meet with Trump and get blasted by social media for accomplishing nothing

We understand that the stated intent of the White House has been to focus its criminal justice reform efforts on improving re-entry, rehabilitation and workforce training programs. That’s nice, but if you have a room filled with spider webs wouldn’t you clean the webs AND remove the spider? You cheered him on for removing a few webs, but you didn’t prophetically challenge him to remove the spiders of sentencing reform, ending the money bail system, profiteering from prisons, and the caste system who author, Michelle Alexander insightfully deconstructs in her book, “The New Jim Crow.” One of the biggest and most venomous spiders is the school to prison pipeline that begins with expulsions of Black and Brown children from school. Expulsions push our children into juvenile court systems and they commence their passage through the pipeline to prison.

Since you’ve been selected to serve on the front-lines of prison reform, as your colleagues, who have been doing this work and fighting to eliminate the spiders of injustice, we would be remiss if we didn’t give you resources for your new assignment. We encourage you to read the aforementioned, “The New Jim Crow.” And Paul Butler’s, “Chokehold.” He documents and declares how police officers, politicians, and ordinary people are afraid of Black men. The result is the chokehold: laws and practices that treat every African-American man like a thug. The former federal prosecutor shows that the system is working exactly the way it’s supposed to. Black men are always under watch, and police violence is widespread—all with the support of judges and politicians.

Add to your justice edification Bryan Stevenson’s “Just Mercy.” Stevenson is a gifted attorney who is engaged in the work of criminal justice reform and testifies that mercy can be redemptive and offers a challenge and tools for fixing this broken system that has resulted in destroying lives, dismantling families and devastating our communities.

Our beloved colleagues, the leader of the free world you met with has a contagious narcissism that has given him a Messiah complex. Please remind him of the first-person pronouns that saturate the model prayer, “Our,” “us” and “we.” No one can overhaul the criminal justice system alone. Remember the wisdom of the Apostle Paul, “I planted, Apollos watered, but God gave the increase.” The flowering of criminal justice reform will require all of our hands for this great work.

Our dear colleagues, the man you met with yesterday during his divisive and incendiary campaign asked the Black community repeatedly, “What do you have to lose?” In less than two years we’ve lost a lot and you have become his cheerleaders with a collar.

We are praying for you. We invite you to join us in dialogue that will prophetically challenge the poison of Trump’s politics, while we work to develop our underserved communities. We are called to speak truth to power. May God give us the courage and power to tell the truth.