She is is gearing up to be the change she wants to see. 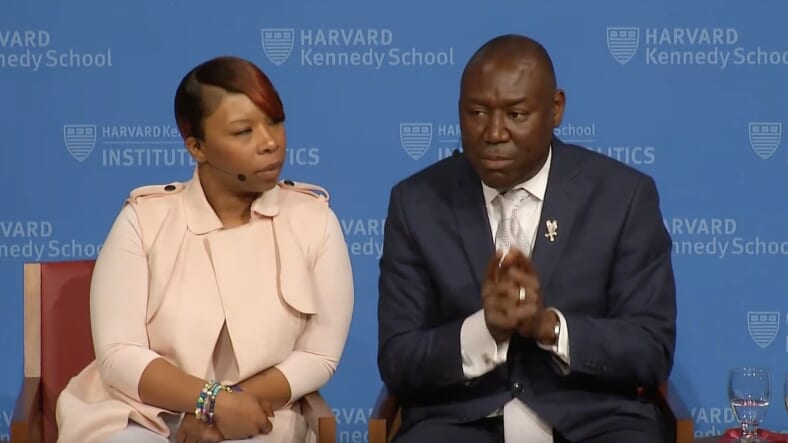 Lezley McSpadden and attorney Benjamin Crump at “The Movement for Black Lives: Justice for Michael Brown 4 Years Later” at the Harvard Kennedy School’s Institute for Politics (Courtesy of YouTube)

Lezley McSpadden, the mother of slain Ferguson, Missouri, teen Michael Brown, is gearing up to be the change she wants to see.

McSpadden announced that she will run for Ferguson City Council at an Institute of Politics panel discussion at Harvard University on Monday night, reports Fox.

The city council sets policing policies in the city and McSpadden wants to see change – especially from the same police department that took her son’s life.

“We have to get behind people who look like us and get them in these elected seats so that they can really do what’s right by the community, and I’m going to start with me by running for Ferguson city council, and hopefully I can elevate,” she said.

“We’re pushing forward and we’re coming through. We’re seeing new people being elected, but will it change what happened then? No. But we can change the course of what may happen tomorrowand what is happening now,” McSpadden added.

McSpadden was joined on the panel by her family attorney Benjamin Crump and it was particularly poignant since Harvard is dealing with its own racial issues following the brutal arrest of a Black student by Cambridge police at the predominately white institution.

Crump noted the disparities in how young Black men are treated by law enforcement.

“We certainly can’t forget about Dylann Roof, the young white supremacist who went and killed nine of the most innocent people you could ever find in a church in South Carolina,” Crump said.

“Then the police not only take him alive, but they take him to Burger King to get a burger and fries. Where is the humanity for Michael Brown? For Stephon Clark? For Alton Sterling? For Philando Castile?”

READ MORE:#BlackonBlue: In the wake of Starbucks, white fear and racial profiling, where is the outrage for Black women like Chikesia Clemons?

Since Brown’s death his mother and little sister have both graduated high school. McSpadden’s graduation came 21 years after she dropped out of high school as a teen mother to care for her now late child.

She has written a book and is working on a bill and petition with Howard University Law School students. She said she wants to turn the tide of how Black men are treated by police officers.

She has also lodged support behind the family of Stephon Clark, who was gunned down by Sacramento police in his grandmother’s backyard.

See her make the announcement here: