During the pre-season games, players protested in force; throwing up fists in solidarity and kneeling on the field during the national anthem. 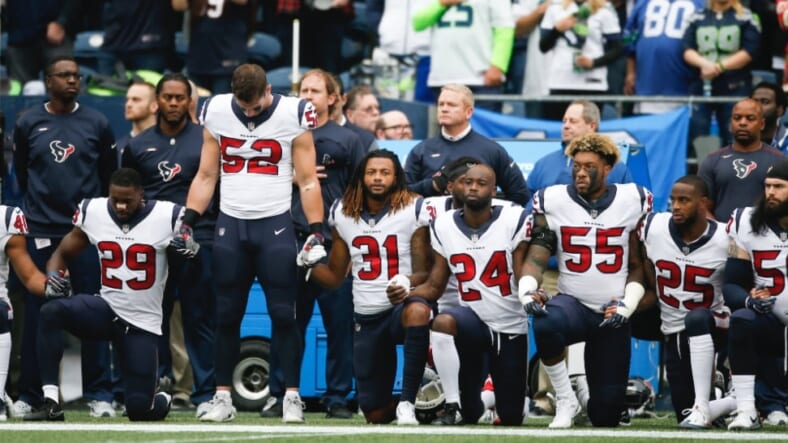 SEATTLE, WA - OCTOBER 29: Members of the Houston Texans stand and kneel before the game against the Seattle Seahawks at CenturyLink Field on October 29, 2017 in Seattle, Washington. During a meeting of NFL owners earlier in October, Houston Texans owner Bob McNair said 'we can't have the inmates running the prison', referring to player demonstrations during the national anthem. (Photo by Otto Greule Jr/Getty Images)

NFL officials implemented a new policy that would punish players who protest against police brutality. But during the pre-season games, players protested in force; throwing up fists in solidarity and kneeling on the field during the national anthem, CNN reports.

Other players remained in the locker room as a measure to show that they too are in opposition to the new NFL rules that promises to levy a hefty fine on players who protest during NFL games.

But the players contend that they are protesting against racial injustice and from the looks of the preseason games and the players who continued to demonstrate despite the penalty, it’s going to be a long season rife with fights over the issue.

As the debate continues to heat up, already President Donald Trump who has criticized the players before for invoking their right to protest, took to Twitter to slam them and call for players to be suspended.

“The NFL players are at it again – taking a knee when they should be standing proudly for the National Anthem,” the President tweeted Friday morning.

“Numerous players, from different teams, wanted to show their ‘outrage’ at something that most of them are unable to define. They make a fortune doing what they love.”

Trump continued: “Be happy, be cool! A football game, that fans are paying soooo much money to watch and enjoy, is no place to protest. Most of that money goes to the players anyway. Find another way to protest. Stand proudly for your National Anthem or be Suspended Without Pay!”

During the Philadelphia Eagles game on Thursday, defensive end Michael Bennett strolled out of the tunnel and went to the bench with his team as the national anthem played. the Philadelphia Daily News reported.

“I just think it’s important to keep this conversation going, that we don’t let it get stagnant,” Jenkins said after the game, according to NFL.com. “You know, as we understand it, everybody’s kind of waiting to see what the league is going to do. … It’s just my personal decision to keep these things at the forefront.”