The All-Star running back silently resumed his on-going protest 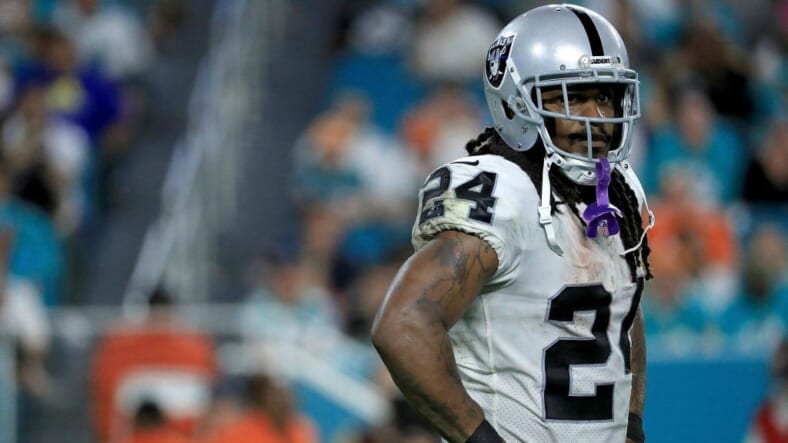 Raiders fans know running back Marshawn Lynch is about that life, which is why he remained seated during the national anthem all of last season and resumed his silent protest during the preseason opener against the Detroit Lions in Oakland.

As noted by USA Today, Lynch took a seat on the bench on the sideline Friday night, much like he did before games in 2017. He’s never publicly stated his reason for sitting but when he decided to remain seated for the anthem during Oakland’s preseason opener last season, then-head coach Jack Del Rio explained that he was caught off guard by the move.

“I talked to Marshawn to make sure we’re on the same page,” Del Rio said after the 2017 game. “He said, ‘This is something I’ve done for 11 years. It’s not a form of anything other than me being myself.’ I said, ‘So you understand how I feel, I very strongly believe in standing for the national anthem, but I will respect you as a man. You do your thing.’ So it’s a non-issue for me.”

Lynch also made quite the statement when he stood for the Mexican anthem before a game in Mexico City last year, after sitting through “The Star-Spangled Banner.” At the time, Donald Trump hit up Twitter to say:

“Marshawn Lynch of the NFL’s Oakland Raiders stands for the Mexican Anthem and sits down to boos for our National Anthem. Great disrespect! Next time NFL should suspend him for remainder of season. Attendance and ratings way down.”

Lynch was reportedly the only Raiders player to sit during the anthem Friday night, while the Lions linked arms, according to sfgate.com.

READ MORE: 5 things to know about ‘Insecure’ ahead of Season 3 premiere

The NFL and NFL Players Association are still negotiating a policy regarding demonstrations during the anthem. On Thursday, the league announced that no players or teams would be punished for opting to stand, sit or remain in the locker room as a means to bring attention to racial and social injustice.

Meanwhile, it remains to be seen whether Lynch will be reprimanded this season.