Counter protestors, carrying signs and placards, arrived in the thousands. 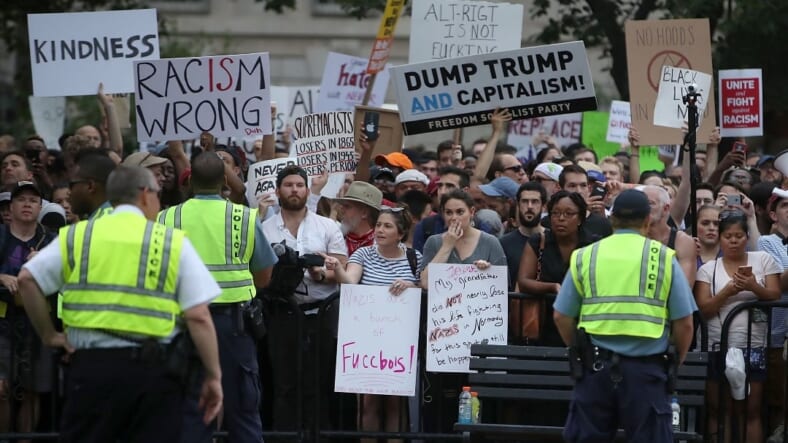 WASHINGTON, DC - AUGUST 12: Protest groups gather near a white supremacists, neo-Nazis, members of the Ku Klux Klan and other hate groups gathering for the Unite the Right rally in Lafayette Park across from the White House August 12, 2018 in Washington, DC. Thousands of protesters are expected to demonstrate against the "white civil rights" rally, which was planned by the organizer of last yearÕs deadly rally in Charlottesville, Virginia. (Photo by Mark Wilson/Getty Images)

On the one-year anniversary of the deadly racist rally in Charlottesville, Va., white supremacists descended on the nation’s capital to hold a “Unite The Right 2” rally, calling for “white civil rights.” Ummm…ok….

However, they weren’t exactly greeted with open arms in Washington, D.C., which is not surprising in the liberal, majority Black and immigrant area affectionately known as “Chocolate City.”

READ MORE: State of emergency declared in Charlottesville for anniversary of ‘Unite the Right’ rally

While the number of white supremacists was expected to be in the hundreds, the Washington Post reports that there were actually about two dozen when the 2-hour rally kicked off at 5:30 p.m. Counter protestors arrived in the thousands in an all-out effort to thwart the racists.

Wait they are having a Unite the Right (White Nationalists) Rally is DC. Marion Berry’s DC? Chocolate City? Ooooh boy.

Y’all better start having these rallies in Boise or Wyoming.

It was  a far cry from last year’s rally in Charlottesville when scores far-right sympathizers and counter protesters clashed. The event culminated when a white supremacist drove his car into a group of counter protesters, killing 32-year-old Heather Heyer. Two Virginia State troopers also died when their helicopter crashed as they returned from the rally.

But on Sunday evening at the outset of the rally, thousands of tweets and videos by counter protesters showed how racists were shutdown.

READ MORE: Why is white fragility considered a reason for ‘a state of emergency’ in Charlottesville?

Washington Post transportation reporter Martine Powers captured video of counter protesters of all races being held back at the Foggy Bottom Metro Station:

Here are the protesters who were waiting for Kessler at Foggy Bottom station, separated by police that stopped them from getting closer than ~60feet from the #UniteTheRight white supremacist group. #ShutItDownDC pic.twitter.com/sZEd3NAdUd

Spotted a block away from the White House. #ShutItDownDC #UniteTheRight2 #DC pic.twitter.com/iqyl0E60sV

BLM works to exemplify the world we want to live in. A world of love where there is no white supremacy, where Black people are liberated and all people are free. #blacklivesmatter #ShutItDownDC #RiseUpFightBack

Karla Ann Cote has great photos from the counterprotests:

Hundreds of counterprotesters have gathered at Freedom Plaza to take a stand against fascism and white supremacy in America #ShutItDownDC #UniteTheRight2 #AllOutDC #UniteAgainstHate #DefendDC #A19 pic.twitter.com/wf4w2UCpUo

Journalist Shahed Ghoreishi tries to reason with one of the White Supremacists:

Kevin Blackistone, a former sports writer, ESPN panelist, and currently a professor at Merill College, catches the counter protesters turning a racist’s chant against them: