Why is white fragility considered a reason for ‘a state of emergency’ in Charlottesville? 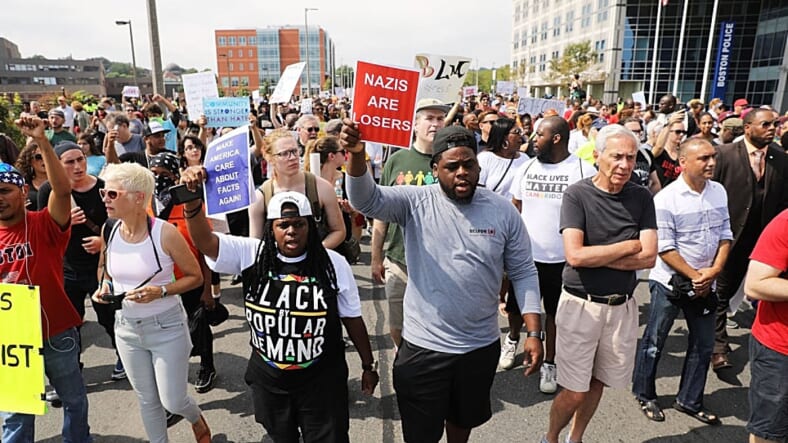 Thousands of protesters march in Boston against a planned ‘Free Speech Rally’ just one week after the violent ‘Unite the Right’ rally in Why is white fragility considered a reason for ‘a state of emergency’ in Charlottesville, Virginia. (Photo by Spencer Platt/Getty Images)

The city of Charlottesville, Virginia, has whipped itself into a panic this week as the one-year anniversary of the horrific and deadly “Unite the Right” rally approaches.

Wednesday, states of emergency were declared for the Commonwealth of Virginia and Charlottesville. These declarations will give law enforcement access to state resources, including the National Guard, if unrest breaks out at protest events in and around the area where a “Unite the Right 2″ rally is set to occur this weekend.

“We are treating this as a statewide event,” Jeffrey Stern, state coordinator of the Virginia Department of Emergency Management, said at a news conference.

After local officials received flack for underestimating the potential for violence at last year’s rally, they are now determined to avoid a repeat of that publicity nightmare. The fragile egos of angry white men (wielding Tiki torches from Home Depot) have once again become a tangible threat to the lives of the law abiding citizens.

What’s it going to take for this country— and the employees at Fox News — to admit that this isn’t an isolated incident and that racist white supremacists are the largest terrorist group in this country, not Muslims, not Black Lives Matter activists, and not any other marginalized groups who get scapegoated in sensational headlines?

It would be great if statistical data and unbiased analysis was factored into these conversations about national security because it would force us to pivot our attention back to domestic terrorism instead of scaring the public into fearing boogymen in hijabs.

Let’s just say that I’m not holding my breath on this happening anytime soon.

Everything about how this weekend is being handled screams “white privilege” as if local authorities find it incomprehensible to see white men as “the enemy.” Despite the fact that last year’s rally lead to the death of an innocent bystander and two police officers charged with protecting the crowd with several others seriously injured, Charlottesville Police Chief RaShall Brackney is still carefully choosing her words as if she doesn’t want to offend the delicate sensibilities of the Neo-Nazis planning to descent on her community.

On what planet is that an appropriate response to a hate group?

This innate need to protect racist white people from actually being called out as such is deeply ingrained into the fabric of this country. If a Black boy gets shot to death while holding nothing more than iced tea and a bag of Skittles, the first question we hear in the media is, “Well what did he do? What kind of young man was he?”

But if a Nazi sympathizer shoots up innocent parishoners at a church, he’s gently arrested and taken to lunch before heading to the police station.

The message that these two examples sends is pretty clear: Black people can take a licking, but “white feelings” are fragile and must be protected at all costs.

A history of hate

No place is this baked in mindset more prevalent than in the ongoing debate about confederate flags and statues that celebrate a time in our country’s history when people of color were being sold on the streets like cattle.

In a recent profile of southern white people that appeared in The Guardian, writer Donna Ladd interviewed a 71-year old man named Ira Isonhood, who while he admits “Yes, he was. [My father] was prejudiced,” still has a hard time understanding why the confederate flag — the same flag that became a symbol in the 20th century for white resistance to ending segregation laws, and was a favorite decoration for the KKK and mass shooters like Dylann Roof — would offend Black people.

In a moment of masterful deflection, Ira’s friend Lindy is confused as to why the flag is under such scrutiny by liberals and people of color. “Is it their feelings?” she wonders aloud.  “Mississippi has bent over backwards to say I’m sorry. How much more do we need to do?”

Genesis Be, a hip-hop artist, public speaker and anti-Confederate flag activist from Biloxi, Mississippi later in the piece offers the only reasonable response to that ridiculous question.

“What has Mississippi done to say that it is sorry for the rape, torturing and killings of scores of its Black citizens in order to create a white majority?” Be says. “Open a museum?”

“I’ve never heard of an apology from the Klan in Franklin County for harassing and assaulting my family while flying that flag. All I’ve heard is a downplaying and whitewashing of history in an attempt to gaslight its population.”

A person whose biggest frustration is having to endure the cognitive dissonance that comes from realizing the world has shielded them from the harsh realities of systemic oppression is often ill-equipped to empathize with the lived experiences of those who live with a daily terror that far exceeds anything they could imagine.

Actress Anne Hathaway recently touched on this during her impassioned social media post about the murder of Oakland teen, Nia Wilson.

“White people- including me, including you- must take into the marrow of our privileged bones the truth that ALL black people fear for their lives DAILY in America and have done so for GENERATIONS.  White people DO NOT have equivalence for this fear of violence,” Hathaway explains. “Given those givens, we must ask our (white)selves- how “decent” are we really?  Not in our intent, but in our actions?”

The reason why white fragility has become such a deadly threat to our communities and caused so many white males to snap at any slight (be they real or imagined) is because society continues to handicap white Americans by sparing their feelings and making them feel as is they are above reproach.

As a whole, we very seldom tell white people they’re “full of s**t” with the same ferocity that we direct at people of color. Unchecked adults are just as bad as undisciplined children who are prone to throwing tantrums when they don’t get their way.

That’s exactly how we ended up with the first Charlottesville rally, which is really nothing more than a bunch of thin skinned white men, frightened out of their minds that the “Blacks and liberals” are gonna take away their toys and all their power.

“Nothing would excite us any better than for this to be non-eventful and folks to go home and it be a peaceful weekend for all,” said Virginia State Police Colonel Gary T. Settle, in preparation of this weekend’s festivities.

These men caused havoc last year in droves, and yet a year later officials are still making hopeful statements to the press that it was all just a misunderstanding and that this time will be “peaceful.”

Must be nice to have the whole system designed to give you the benefit of the doubt even when you don’t deserve it.