EXCLUSIVE: Omarosa on her message to the Black community– “I Came Up Short” (Part 1)

Omarosa talks regrets, accomplishments in the White House and finally deciding Trump was a racist

In part one of her first interview with an African-American media outlet since the release of her blistering memoir Unhinged: An Insider’s Account of the Trump White House, Omarosa Manigault Newman spoke to TheGrio‘s Natasha Alford at her hotel in New York City Tuesday night.

Manigault Newman says that while she took the job in the White House to have a “seat at the table” for the Black community, she didn’t accomplish all she set out to do and has regrets—something she partly blames on vitriol against President Trump.

“In some ways, I came up short,” Manigault Newman responded.

“A lot of that was the animosity towards Donald Trump. People just generally were devastated that this racist was going to run our country. So, no matter what efforts I put out, people didn’t want to see that type of residual outreach.”

“Where I would get frustrated because I would show up and people would boo and hiss and protest and downright just completely push back against my efforts to outreach.  I could certainly see why people didn’t want me there.  But nonetheless I thought it was important for me to reach out.”

When asked about her comments that Donald Trump was “racial” and not “racist,” Manigault Newman says her personal relationship with Trump impaired her judgment.

“You say that he’s a racist and he’s a misogynist. Some people would say they always knew that. Why did it take you this amount of time to come to this conclusion?” Alford asked.

“You know, I had a complete blind spot with the person who I thought that I had known for so long,” responded Manigault Newman. 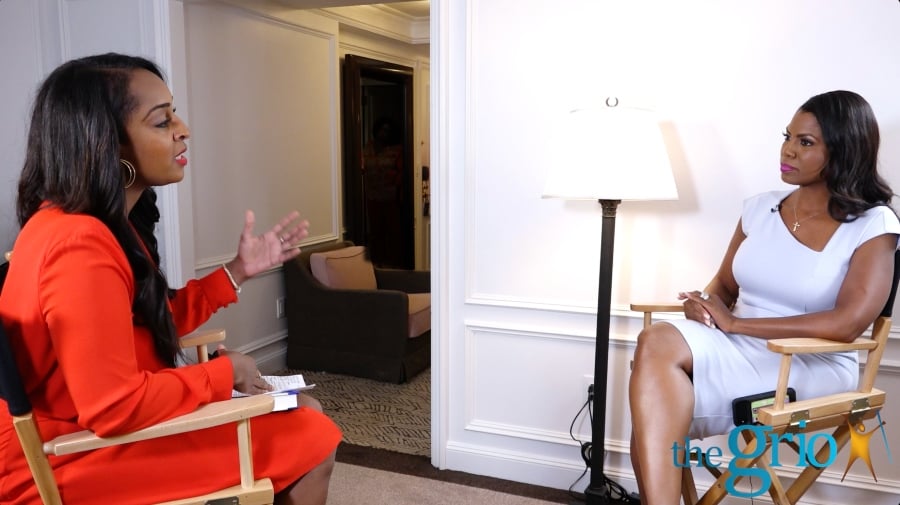 “I was too close to him to really see what he was doing and in a lot of ways I missed the mark in terms of having an opportunity to impact him a little more…[People] thought that I was complicit with every single decision that he made and that wasn’t always the case…To get up at the table by most of these white men, and then to walk out and try to go to my community and get the push back that I got. I didn’t realize it until after I left the White House, just how heavy of a burden that was.”

According to The New York Times, the Trump campaign has filed a lawsuit against Manigault Newman.

Manigault Newman says she’s unafraid of Trump’s army of lawyers, who she believes are trying to bankrupt her with lawsuits and humiliate her by having papers served at her husband’s church.

Today, upon the eagerly awaited release of Unhinged, Trump reached a new low in a tweet when he called her an animal.

Trump wrote: “When you give a crazed, crying lowlife a break, and give her a job at the White House, I guess it just didn’t work out. Good work by General Kelly for quickly firing that dog.”

When you give a crazed, crying lowlife a break, and give her a job at the White House, I guess it just didn’t work out. Good work by General Kelly for quickly firing that dog!

Many have spoken up against Trump’s language, calling it derogatory and racist.  Still skeptics say Omarosa Manigault Newman is simply getting back what she signed up for by choosing to work with President Donald Trump, a man who has repeatedly insulted women and minorities with a special kind of vitriol.

“What would you say to the Black community… to people who feel betrayed that you took this position in the first place?” Alford asked.

“I am not in any way comparing myself to Martin Luther King but had Martin Luther King not gone and sat down with Lyndon B Johnson, we would not have had the civil rights act,” responded Manigault Newman, who cites her advocacy for HBCU’s and what she described as famine outreach efforts, as the highlight of her 11-month tenure at the White House.

“We can’t just sit back and ignore Donald Trump for the next couple of years. Some how some way we have to have a emissary who is willing to go into the lion’s den and fight the good fight for our people,” Manigault Newman told theGrio. “It’s a fight that’s worth fighting.