Say No to Couch Surfing at 30: 5 Life lessons from last night’s ‘Insecure’ 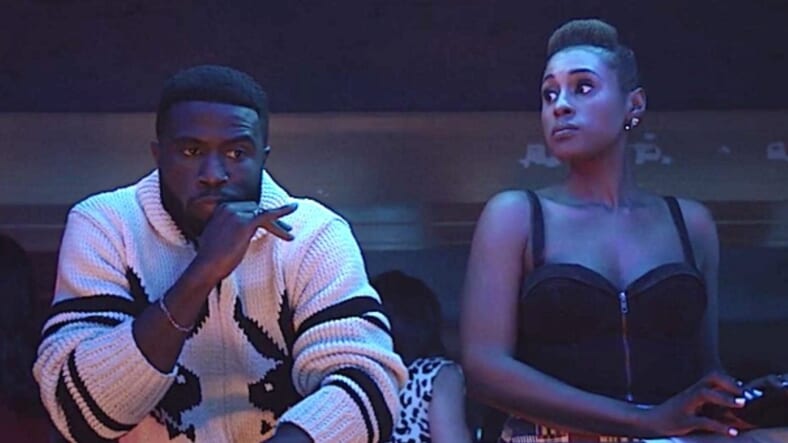 Episode two of this season’s Insecure, “Familiar-Like,” will probably go down as the last (Issa Rae)-and-Daniel (Y’Lan Noel)-only episode: Molly and company are nowhere to be found, though the funniest scene involves Natasha Rothwell’s Kelli managing Issa’s floundering credit situation.

The episode is clearly designed to create more tension regarding Issa and Daniel’s will-they-or-won’t-they dance, which might justifiably aggravate those of us who were hoping for a resolution to their storyline a couple seasons ago. At any rate, here are five takeaways from “Familiar-Like”:

1. Sometimes, you need to keep your mouth closed when white folks are working things out

I’m sure quite a few Black professionals find themselves in the unenviable situation of having to be in the room when their non-Black colleagues work through racially sensitive shit that you already knew about. In this case, Issa’s boss Joanne (Catherine Curtin) is discovering just how out of pocket her “We Got Y’all” logo is. Issa’s colleagues explain it to Joanne while Issa remains quiet in the cut, before one colleague says what everyone else in the room (and watching the show) is thinking: Go with what Issa has to say. Of course, Issa couldn’t express the concerns first, because then she’d be the nagging Black woman.

2. If you really like someone else, the person you’re actually with can remind you very quickly

By the episode’s conclusion, we’re meant to recognize that Daniel has deeper, unresolved feelings for Issa, which frames his conversation with his girl (jumpoff? HomieLoverFriend?) Vanessa (Candice Ramirez) in a better context. As Vanessa (over)excitedly reads gossip from her phone, she makes a comment about the (presumably) fake couple Lonzo Ball and Alexandra Shipp: “I love light-skinned love.” Daniel gives us his best “thiiiiiis chick right here” face; it’s not until you finish the episode that you know he’s likely thinking, “Issa wouldn’t be on this dumb shit.”

3. Your whole existence is forfeit if you’re crashing at someone’s crib for free

Issa had to eat every crumb of humble pie by asking Daniel for extra time at his place, only to get a diminished counter offer from him. There are few things more humiliating than being in a situation in which you’re technically homeless, but you have to lean on people who care about you to stay afloat (I still think the way Issa went about it is ridiculous, but whatever). I have two living parents who love me, but I’d still feel like the patron saint of failures if ever I had to ask to live with them. Issa’s situation made me want to wake up earlier the following Monday and work a little harder so as not to go broke.

4. Talent doesn’t get it in the music game? You don’t say…

Daniel displayed more vulnerability that he has in the history of the show, opening up to Issa that he feels a way that his former music protégé Khalil is going places musically with what he considers an inferior product (“I got good, Khalil got famous”). It’s a water-is-wet, sky-is-blue revelation that merits a reminder from time to time. All you really need to do is look at the number of face-tatted “Lils” on the Billboard Hot 100 at any given moment to know that Daniel might have this frustration forever if he chooses not to sell out.

This may be more of a personal take considering I was summoned to a club I wanted no parts of after midnight this weekend by a friend visiting from out of town and wound up in a damn line full of people a smooth decade younger than me as power-tripping bouncers power tripped. But as Issa and Daniel had to endure all the attendant club hijinks in order to bump elbows with a bunch of skinny-jeans-rocking, triplicate-flow-loving kids and n—-s with braces that match their money, it felt like they were too old to be there. Noel celebrated his 30th birthday the night the episode aired, but he carries himself like he’s too old for this club shit. Of course, the show wouldn’t be as interesting if they were in at 9:30 and kicked back with a glass of Chardonnay and HBO GO.