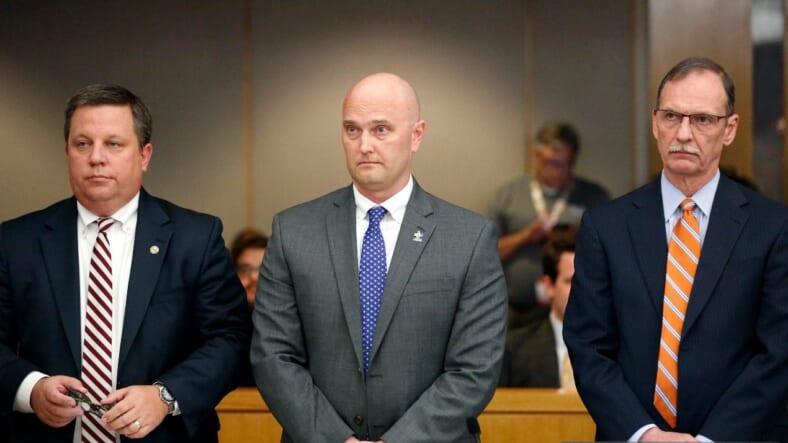 Fired Balch Springs police officer Roy Oliver and his attorneys Miles Brissette (left) and Bob Gill (right) before the reading of the verdict on the ninth day of the trial of Oliver, who was charged with the murder of 15-year-old Jordan Edwards, at the Frank Crowley Courts Building in Dallas on Tuesday, Aug. 28, 2018. (Rose Baca - Pool/The Dallas Morning News)

Roy Oliver’s own sister, Wendy Oliver, thinks he’s trash who doesn’t need to see the light of day after being convicted in the killing of Jordan Edwards.

Wendy testified against her brother in the sentencing phase and even though Oliver got a mere 15 years for the fatal shooting of Edwards, she didn’t take her sibling’s side and inside wished him the worst—the maximum lifetime sentence behind bars.

“I sent her (Jordan’s mother) a message saying that I hoped that justice is served in this case and he gets what he deserves because he took an innocent life and I feel sorry for what he has done to this boy and I was watching testimony,” Wendy Oliver testified in court.

In the Facebook message to Edwards’ family, Wendy called Oliver “trash” and sympathized with the slain boy’s mother.

According to a WFAA video, when asked if her brother should get the minimum sentence, Wendy said:

“I don’t think so,” she told lead prosecutor Michael Snipes.

Snipes asked if the maximum sentence would be more appropriate. Wendy replied:

“I think so because of the circumstances that happened.”

During the trial, Oliver said he only fired at the car because he believed it posed a threat to his partner, Officer Tyler Gross. Oliver testified that he believed Gross’ life was in danger. Gross, however, took the stand against his partner and claims that he never feared for his life.

Oliver was sentenced late thursday night to 15 years in prison for the fatal shooting of Jordan Edwards.

The Edwards family told reporters the verdict wasn’t what they had hoped but it was a step in the right direction.