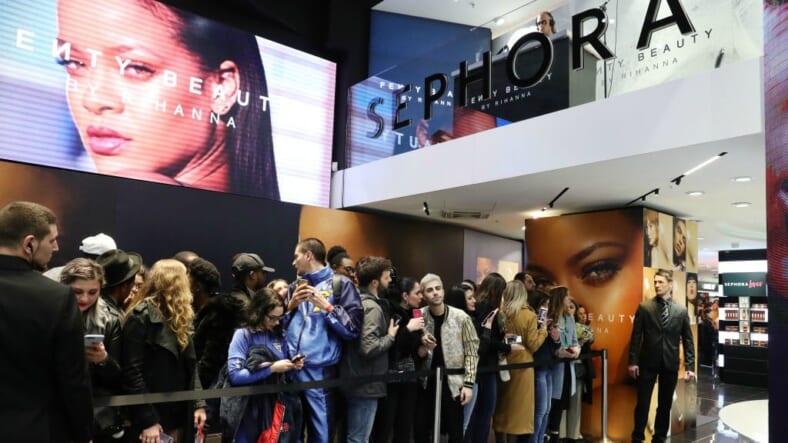 (Photo by Vittorio Zunino Celotto/Getty Images for Sephora loves Fenty Beauty by Rihanna)
How will you be celebrating Fenty Beauty’s one-year anniversary?

A year ago on Sept. 8, megastar Rihanna, born Robyn Rihanna Fenty, shook up the beauty industry when she launched Fenty Beauty, a cosmetics line featuring lots of goodies, including a universal lip gloss, the highly coveted “Trophy Wife” highlighter, as well as a wide array of foundation shades — 40 to be exact.

“As a Black woman, I could not live with myself if I didn’t do that,” the Bajan beauty told Vogue magazine back in June. “But what I didn’t anticipate was the way people would get emotional about finding their complexion on the shelf, that this would be a groundbreaking moment.”

To celebrate its one-year anniversary, Fenty Beauty is rolling out two new products: a Gloss Bomb Lip Luminizer in the shade “Diamond Milk” and a Diamond Bomb All-Over Diamond Veil highlighter. Fenty Beauty’s latest additions both take a page out of Rih Rih’s iconic look at the 2014 CFDA Awards.

In an interview with Refinery29 published on Thursday, Rihanna’s makeup artist Priscilla Ono said, “A lot of people don’t know it actually has a crazy amount of shea butter and it’s healing on the lips. If you have chapped lips, then it actually heals it way faster than a Chapstick. I put it on [dry lips] while I’m doing their makeup, and the lips just soak it up.”

On the other hand, Sephora describes the Diamond Veil highlighter as a “one-of-a-kind, diamond-dusted highlighter that applies like a 3D glittering veil, delivering pure, show-stopping sparkle all over the face and body.”

The lip luminizer and highlighter retail for $18 and $38 at Sephora, FentyBeauty.com and Harvey Nichols.

Within the first 40 days, Fenty Beauty earned a whopping $100 million in sales, and the company is reportedly on track to outsell Kylie Cosmetics and KKW Beauty this year.