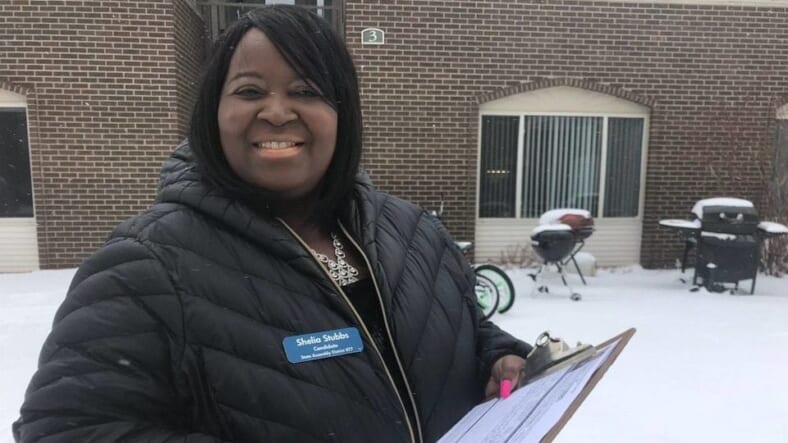 Shelia Stubbs was riding high after she won the Democratic primary for a state Assembly seat in Wisconsin’s 77th District. But she hit a low that hurt her heart after a man called police on her as she knocked on the doors of her constituents and canvassed in her district.

Stubbs is running unopposed to become the first Black state assemblywoman in Wisconsin’s 77th District and was with her 71-year-old mother and her 8-year-old daughter campaigning door-to-door for votes when the cops rolled up on suspicion that they were buying drugs, according to Madison’s Capital Times.

With her literature and pamphlets in hand, cops questioned the politician and told her they were responding to a call about a “suspicious vehicle.” The police report said the male caller “thinks they are waiting for drugs at the local drug house.”

She said cops asked: ‘“Well, how do you know what doors to knock on?’ And I said, the walk list. And she said, ‘Can I see it?’ And I said, sure, here you go, and then she said, ‘I’m really sorry that that happened to you’” Stubbs said about the exchange with the female officer.

Even though the situation has hit a nerve with Stubbs she said she wants the caller “to see that I made it.”

“I am now your representative,” she added.

READ MORE: Power of 5: NAACP calls on Black voters nationwide to register 5 people and get them to the polls

Stubbs joins a growing list of Living While Black victims who have had the police called on them for doing pretty much nothing other than being Black.

Recently the same things happened to Janelle Bynum, a Black state representative in Georgia who was running for re-election for her seat and decided she would hit the campaign trail and canvass door-to-door to meet her constituents.

Bynum took to Facebook to detail how her campaigning resulted in an unnecessary visit by the police.

“Live from the mean streets of Clackamas!!! Big shout out to Officer Campbell who responded professionally to someone who said that I was going door to door and spending a lot of time typing on my cell phone after each house—- aka canvassing and keeping account of what my community cares about! I asked to meet my constituent who thought I was suspicious, but she was on the road by then. The officer called her, we talked and she did apologize. #letsbebetterneighbors”

Can we stop calling the cops on Black people already?