Homeless high school football player is back on the team, offered housing and $20,000 via GoFundMe

His story went viral after his principal removed him from the team over residency concerns. 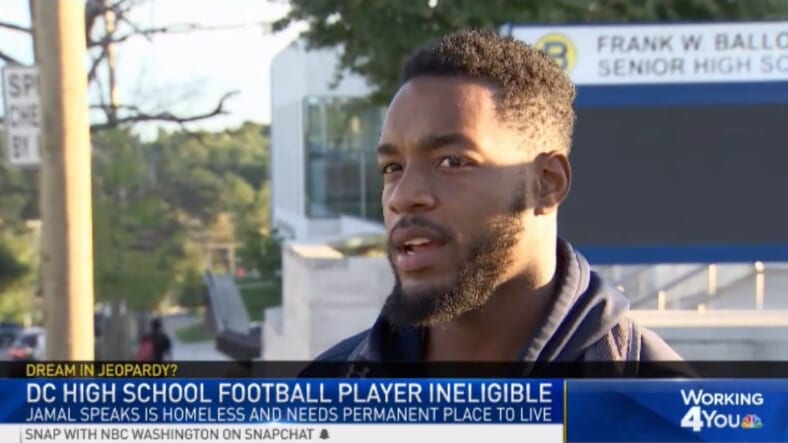 Jamal Speaks, the high school football player kept from playing the game he loved over housing rules, is now back on the team.

Speaks, an 18-year-old senior at Ballou High School in Washington, D.C. received nationwide support after his principal removed him from a football game where he was expected to play in front of recruiters. Because Speaks was homeless he was ineligible to play.

According to NBC4 Washington, DC Public Schools officials said the eligibility issue was being resolved:

“With the best interest of the student and the entire Ballou Knights football team in mind, we are working with DCSAA to resolve this matter as quickly as possible.

In addition to earning his spot back on the team, Speaks saw compassion from many supporters, raising more than $20,000 via GoFundMe in five days.

Speaks, who is a night school student, was told he couldn’t play back in August, but he and his godmother successfully appealed the decision via State Athletic Association.

According to DCPS, principal, Willie Robinson was  “advised of the residency concerns,” but not told to remove Speaks from the game.

“I was upset at first, because I had so many people come to see me play,” Speaks told The Washington Post. “I worked so hard on and off the field. Have a good GPA, work in the classroom and outside of school… So me just trying to stay in the area to get back and forth from school, it’s already tough.”

Local Councilmember, Trayon White, advocated for Speaks and called out the issue as a personal one, which should’ve never happened.

He is eligible to play. I have the official letters stating such. This is Principal Willie Jackson own personal reasons he don’t want this young man to play point blank. I spoke to the principal and he is leading with no compassion or legitimate reason.

Speaks is a member of Ballou STAY Academy, is an alternative high school program, which offers high school or vocational diplomas.

The program tweeted congrats to Jamal after news broke that he was returned to the team.  “Thanks to all the Ward 8 community leaders for your support and everyone throughout the nation that caught wind of this story! See you at the game!”