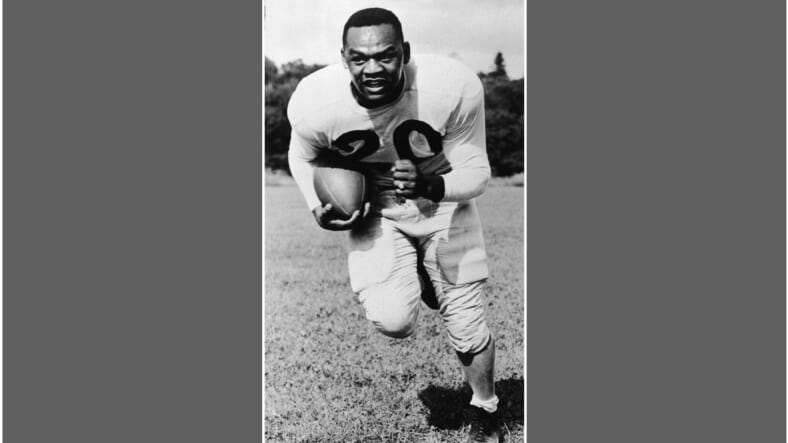 New York Yanks quarterback George Taliaferro, 1949 Rookie of The Year, runs on the field, carrying a football, circa 1949. (Photo by Keystone/Getty Images)

George Taliaferro, the first black player ever taken in the NFL Draft as well as a college football Hall of Famer, passed away on Monday at the age of 91.

The George Taliaferro Sport Association tweeted the news of his death on Monday.

We regret to announce that our namesake of the organization has passed away. George Taliaferro was truly a role model in the Bloomington community. We will continue to make sure his legacy lives on here and throughout the country! pic.twitter.com/Wlxrrh33th

Born in Tennessee but growing up in Gary, Ind., Taliaferro became a superstar at Indiana University at a time when black players weren’t afforded many opportunities in college football or the pros. Playing quarterback, running back, and punting for the only undefeated team in school history in 1945.

READ MORE: Kanye to meet with Trump at the White House

After declining to play with the Bears, he played one season in the All-America Football Conference before joining the NFL’s New York Yanks. Taliaferro played in the league from 1950-1955, making the Pro Bowl three times from 1951-1951.

He spent three seasons as a running back and quarterback – the second black QB in league history after Fritz Pollard – with the Yanks/Dallas Texans, two years with the Baltimore Colts, and his final season with the Philadelphia Eagles. Indiana University mourned his loss by lowering all flags to half-staff.

“All of us at Indiana University are deeply saddened by the passing of George Taliaferro, a man of enormous talent, courage and determination that helped him shatter racial barriers and earn a special place in the annals of our state,” Indiana University President Michael A. McRobbie said in a statement. “As a student-athlete at IU, at a time when segregation was prevalent across our state and nation and in the face of tremendous obstacles, he fought to integrate our classrooms, cafeterias, movie theaters and restaurants. And he continued to be a champion for fairness, compassion and equality well past his playing days.”

READ MORE: Teacher accused of calling Black student n-word and hitting him with a clipboard

Current Colts owner Jim Irsay remembered Taliaferro on Twitter on Monday, calling him “a trailblazer and a true gentleman”

Rest in peace, George Taliaferro. Not only 1st African-American drafted into NFL, but also league’s 2nd African-American QB. A trailblazer and true gentleman, George graced us with his presence at a recent home game. One of our last connections to pro football of the ’40s/50s.

Taliaferro was inducted into the College Football Hall of Fame in 1981. His nephew, Lorenzo Taliaferro, spent three seasons in the NFL with the Baltimore Ravens from 2014-2016.

There has been no word yet on funeral services for Taliaferro.