The actress wore 10 different outfits when she hosted the show for the second year in a row. 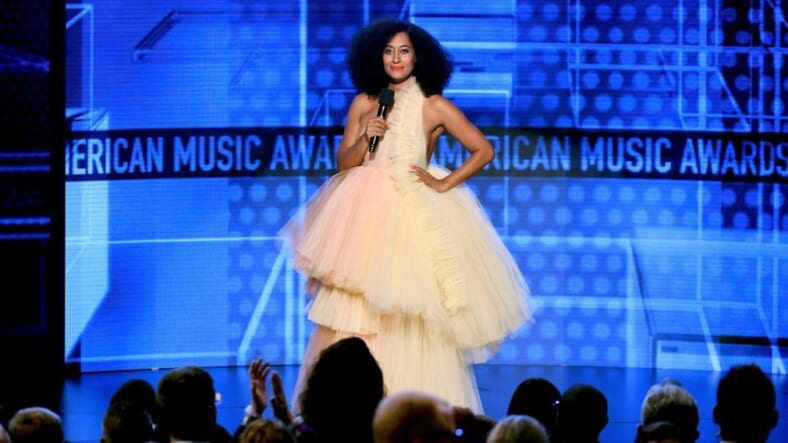 Tracee Ellis Ross hosted the American Music Awards for the second year in a row and the actress used her platform to highlight the work of Black designers.

The black-ish star made a conscious decision to choose outfits created by Black designers and pulled off ten wardrobe changes during the live show.

“I’ve featured black designers in all of my @AMAs press looks, and will do the same for all my show looks tonight!,” she posted on Twitter ahead of the big event on Tuesday night.

She and her stylist, Karla Welch, selected several gorgeous outfits by Black designers and we’ve got the scoop on all of her looks.

The 45-year-old actress strutted down the red carpet in a light pink and black suit by Pyer Moss and paired it with red bottoms.

When Tracee Ellis Ross opened the annual awards show, she donned a sequined bodysuit by Nicolas Jebran underneath a Dapper Dan cape by Gucci and paired it with Air Force 1s.

Ross kept her sparkle game going with this gold gown by CD Greene.

The actress made a statement with her next outfit; a bright red skirt by Shanel Campbell paired with a T-shirt by When We All Vote x Karla that encouraged viewers to vote. 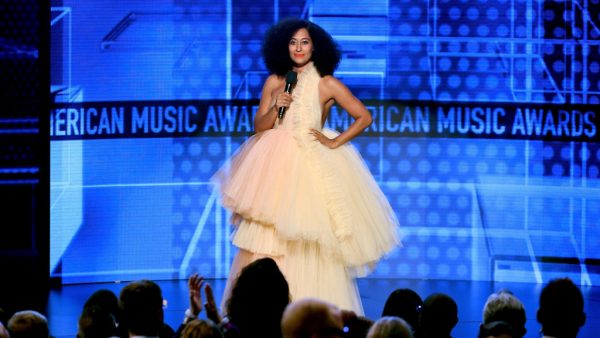 For a more polished look, Ross went with this cream-colored, tulle gown by Off-White and it may have been our favorite look of the night.

This wild child went all the way there in this leopard-print bodysuit by Sergio Hudson. The matching hat and sunglasses helped to take this belted look to the next level.

Ross served up another winner with this gorgeous gown from Lavie by CK. We loved the shape and colorful pattern.

Ross rocked this black, sequined number from Balmain beautifully. The double-breasted gown gave off the appearance of a suit, but offered a sexy slit to show off those lovely legs.

This bold blue look was a super special selection from DESHON. The belted suit came with a skirt and a train and looked fantastic on stage.

Trace Ellis Ross closed out the show in a red, off-the-shoulder jumpsuit from CUSHNIE by Carly Cushnie after the incredible tribute to Aretha Franklin.