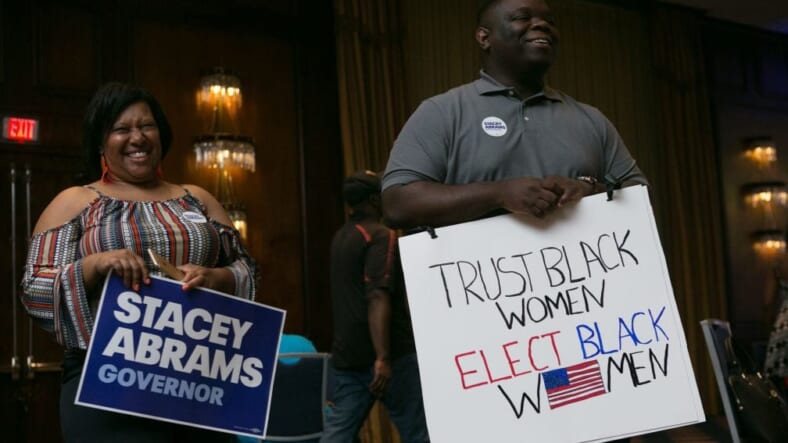 It’s been 50 years since the late Shirley Chisholm—the first African-American woman elected to Congress—urged women not to wait for a seat at the table, but to bring their own folding chairs and get involved.

Now, with the November 6 midterm elections two weeks away, Black women are demanding their collective seat at the table: as candidates, organizers, fundraisers, and a powerful voting bloc.

“As Black women, we have tremendous political capital. Now, we need to turn [that] into strategic political actions and investments that create the election outcomes and leadership accountability we and our communities need,” said Glynda Carr, co-founder with Kimberly Peeler Allen of Higher Heights, a national organization dedicated to electing Black women. “This election is about harnessing the power.”

Census and election data show that nearly 16 million African American women are eligible to vote, and 73 percent are registered. Black women had the highest voter turnout rates of all groups in 2008 and 2012 when president Barack Obama made history, and the second highest in 2016 when they overwhelmingly cast ballots for Hillary Clinton over Donald Trump.

This midterm election cycle, there are critical races happening across the country. They include all 435 members of the U.S. House of Representatives, 33 U.S. Senators, 36 governors, not to mention dozens of state and local legislative races, and ballot initiatives.

Black Women in the Voting Booth and on the Ballot

Record numbers of women are running nationwide, according to data from the Center for American Women and Politics (CAWP) at Rutgers University. And more women of color have won nominations for U.S. House than in any other year.

“I’ve been asked if this is a record number of Black women candidates. We can’t know that because there is not data on race/gender for primary candidates before this year,” said CAWP scholar Kelly Dittmar, Ph.D., in an email. “I do believe, however, it is a high for Black women nominees – at least since we kept these data since 2000.”

When it comes to African American women, there are Democrats, Republicans and Independents trying to disrupt the political establishment, and voters have a chance to say their names.

There’s Stacey Abrams (D), aiming to become the Governor of Georgia, and the first Black woman governor in American history. Anastasia Pittman (D) is on the ballot for Lt. Governor in Oklahoma; her daughter, Ajay Pittman–a Millennial—is running for the state legislature. Erika Harold is the GOP nominee for Attorney General in Illinois. To name a few.

Meanwhile, at least 17 African American women are vying for seats in Congress; if successful they could add to the 20 Black women currently serving in that body, along with Sen. Kamala Harris on the Senate side.

“So much has happened, or is about to happen, … The time is right.” — Shirley Franklin (@ATLShirley), First Black Woman Mayor of Atlanta. #BlackWomenLead #SundayBrunch pic.twitter.com/gxp33ecI9p

LaTosha Brown is co-founder with Cliff Albright of the Black Voters Matter Fund, which launched a bus tour across the deep South to help get out the vote for Black candidates. “There are seven target states [where] we are working. Alabama, Georgia, Florida, Mississippi, North Carolina and South Carolina,” she said.

That’s one of many calls to action happening nationwide. Former First Lady Michelle Obama recently launched the When We All Vote initiative to get folks registered. And celebs such as Janelle Monae, Kerry Washington, Tracee Ellis Ross and Yara Shahidi are promoting civic engagement via their social media platforms and beyond.

Stefanie Brown James is co-founder with husband Quentin James of The Collective PAC, a national organization working to boost Black representation on the local, state, and federal level.

This evening, October 16, they are hosting an event in New York with Hillary Clinton keynoting, to raise monies for their 501c4 arm, Collective Future.

“It will help support our efforts to implement the largest mobile get out the vote program in history targeting Black voters – aimed at reaching 3.1 million registered Black voters in 12 states,” said Brown James.

As part of its #BlackWomenVote campaign, Higher Heights is staging `Truth Tellers: A National Night of Sister to Sister Salon Conversations,’ also beginning on Tuesday.

According to Peeler Allen, they want Black women “to gather in rooms and homes across the country to share their truths about the issues affecting them, their families and their communities.” The events will help women strategize how best to use their political power to address concerns, and organize their networks to vote.

The Black Women’s Health Imperative is also making an effort to educate and empower Black women.

They are convening a series of ‘kitchen-table discussions’ starting in states such as Alabama, Florida, Georgia, Maryland, New York and Tennessee. The organization recently released “Black Women Vote: The 2018 National Health Policy Agenda” to help ensure the health needs of Black women and girls are addressed at the federal and state levels during the 2018 and 2020 election cycles.

“Black women deserve to have a leadership role at the table because their vote is essential and their health depends on it,” said President/CEO Linda Goler Blount.

“It is our hope that Black women, our supporters, policymakers, and others will read the agenda and take action.”