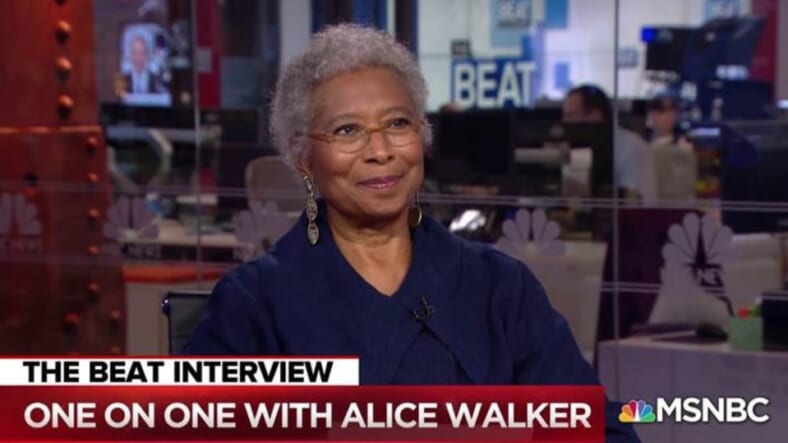 Melber played audio of Trump bragging about his smarts: “I went to an Ivy League school, I’m very highly educated. I know words, I have the best words.”

The talk show host then asked Walker: “What does it tell you that it’s important to him to be perceived as so smart?”

“It tells me that he knows he probably is not and he has an inferiority complex,” Walker replied.

“And that’s very sad, but it’s even sadder that we elected him to lead,” she continued. “We definitely need a very different kind of leader, and, in fact, we actually need to lead ourselves, and until we do, we probably won’t get very far.”

Melber then asked if his inferiority complex makes him a dangerous man.

“Does a feeling of inferiority or a lack of self-affirmation or love, does that make people more dangerous when they come into contact with power or money?”

“Yes, because there’s always envy — a need to measure up, you know,” she explained. “I mean, you can see that between him and Barack Obama. I think the envy there was so blatant.”

“That Donald Trump envied Barack Obama even though he started out with more than Barack Obama?” the host asked.

“That’s part of the problem, that he had everything and Barack is a black man who is supposed to have nothing,” she replied. “And it’s very hard to take, but the answer is not to make us all suffer, it’s to go and improve yourself.”

The Pulitzer Prize-winning author has spoken.

Walker On Kendrick Lamar’s ‘The Color Purple’ Quote On “Alright”

During the show, Walker was asked to give her reaction to Kendrick Lamar’s To Pimp a Butterfly track “Alright” which opens with him saying a famous line from her Pulitzer Prize-winning novel The Color Purple — “Alls my life I has to fight.”

“I’m happy for him,” Walker said, although she admitted she hadn’t heard the song.

“I think he’s understanding that is the truth of it. Especially for poor people and people of color in this country. We’ve had to fight all of our lives. And it’s a good thing that we can talk to each other across generations.”