The ad encourages Black voters in Arkansas to support Rep. French Hill in his re-election bid against Democrat Clarke Tucker. 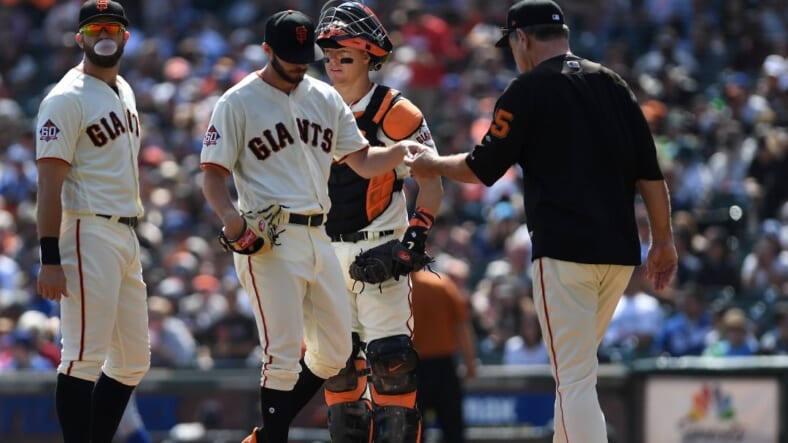 Andrew Suarez #59 of the San Francisco Giants is pulled in the third inning during their MLB game against the Los Angeles Dodgers at AT&T Park on September 30, 2018 in San Francisco, California. (Photo by Robert Reiners/Getty Images)

“What will happen to our husbands, our fathers or our sons when white girls lie on them?” one woman says in the audio drop.

“White Democrats will be lynching black folk again,” says the other.

The ad encourages Black voters in Arkansas to support Rep. French Hill in his re-election bid against Democrat Clarke Tucker.

This is a real radio ad currently running in Arkansas in support of Republican Congressman French Hill on radio stations targeted to the African American community. I don't even have words to describe it. pic.twitter.com/vpzt1nGPlc

Here are statements from the Giants and principal owner Charles Johnson on the Super PAC donation and racist advertisements pic.twitter.com/7tPtpCxVpS

Johnson released a statement Friday denying any specific knowledge of the advertisement.

“I had absolutely no knowledge that this donation would be used in this manner and I, like the Giants organization, strongly condemn any form of racism and in no way condone the advertisement that was created by this entity,” the statement said.

Now, the San Francisco Giants baseball team has issued a statement distancing itself the billionaire Johnson.

The Giants’ reputation as one of the most inclusive and socially engaged professional sports teams in the nation speaks for itself. We are unaware of Mr. Johnson’s political donations because they are entirely separate from his stake in the Giants ownership group. In no way do the Giants condone this disturbing and divisive political activity.

Meanwhile, a Giants fan site called McCovey Chronicles blog noted: Charles Johnson was not in the room when the audio finished exporting. He wasn’t there at the script stage. He might not have even heard the ad until today. But he knew what the PAC was about, he knows the research shows that “conservatives” are “highly motivated to vote” when they are alerted to “liberals” possibly showing up in large numbers to the polls.

His statement doesn’t do anything to distance himself from the particular committee, the words hop across lily pads of key terms, and there’s no message that he finds the association troubling for himself or the team. In fact, “I, like the Giants organization,” is a passive way of letting the business entity take the lead—he’s just echoing what the rest of the group said.