TheGrio caught up with actors Demetrius Grosse and Shamier Anderson, along with director Alfons Adetuyi to talk about what it was like to bring their vision to life 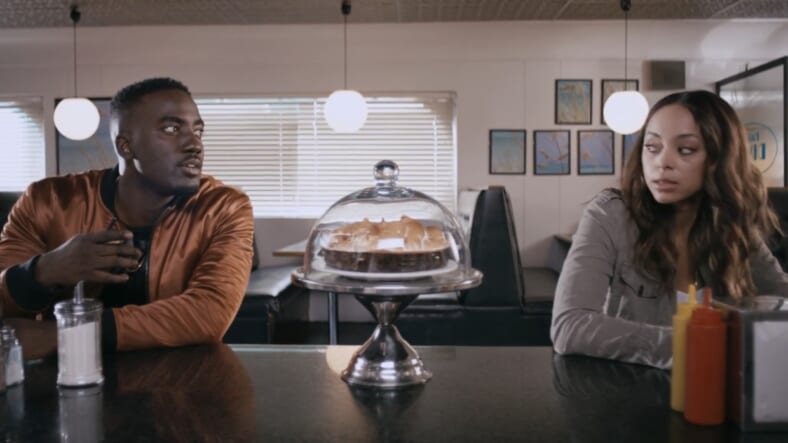 Love is a many splendored thing or it can be a total mess, as seen in the upcoming release of the romantic comedy Love Jacked due out in theaters everywhere Oct. 26.

TheGrio caught up with two of its stars Demetrius Grosse, Shamier Anderson and director Alfons Adetuyi for an Atlanta screening to talk about the inspiration behind the funny film, the takeaways, especially when loves goes awry, and the cast that made the movie a delightful reprieve from the same old black movie narratives.

Love Jacked stars Amber Stevens West, (The Carmichael Show) who plays Maya, a self-willed millennial with artistic ambitions, who refuses to let her headstrong dad Keith David (Greenleaf) have the last word when it comes to her love life. Maya meets an African Casanova, Mtumbie, played by Demetrius Grosse, (Straight Outta Compton), who sweeps her off her feet and proposes to marry her pretty fast. But things come to a halt when she finds Mtumbie in bed with another woman.

No further spoilers here, but the story is a cautionary tale that’s as complicated as love is.

You’ll have to check the flick out for more. But here, the three cast members talk about what it was like to make the movie.

On securing the role and his inspiration playing the part:

“I was absolutely through the roof when I found out I got the role because it had to have the authenticity of Africa and I’m not quite an Afrophile. I really loved (that) I had the opportunity to play a native South African. I’m from Washington DC. To have a Nigerian director, give me the nod to play an African… it was a no-brainer.

“I really studied Nelson Mandela. That was my inspiration. I’m acting with Marla Gibbs, Keith David… legends. That was all the inspiration I needed.”

What was your best moment?

“We had a rain delay and the driver who was taking us to set kinda took us off-route to this little cove (where) Keith David and I were singing all kinds of musicals. We started singing sings from “The Wiz,” “Sweeney Todd,” and some “Guys and Dolls”… We had a cannon of songs that we were able to sing, chilling on the beach and seeing the beautiful sights that ought to be seen on the beaches of South Africa.

What do you want people to take away with this movie?

“I think the real beauty of this movie, first of all is how well it’s shot and how dynamic the characters but even further than that, how sophisticated and classy it is…Oftentimes we don’t get to see our stories told in a humorous way but with as much dignity, and as much class as expressed that Alfons put in this movie, and all the performers who came together to make this film. It’s in a pocket of class without taking itself too seriously… I think it’s gonna translate. It shows black love in a way that is multidimensional. It’s eclectic, it’s sophisticated and it’s fun.

On the movie’s impact:

“What I want them to take away is the different stories in the black community outside of what Hollywood is giving us. Outside of the slave, outside of the gang bangers, we get to see black love. But black love in a way where it’s universal and can relate to everybody. It’s a beautiful story. A beautiful film.”

Parts of the movie was filmed in Africa, what was the inspiration behind filming there?

“I wanted to do an authentic story and show different flavors of black life, African American life, African life and bring them together in a story, and I thought, you know you gotta’ go to the source. Bring the actors there with the backdrop of South Africa, you know they could really feel their parts and it’s hard to duplicate Cape Town South Africa.” he admits.

“Anybody who’s been there knows, it’s a whole different vibe. We went to the outback, to the safari. With real animals. We got some giraffes back there… you just can’t have that in LA.”

Adetuyi is Nigerian and said he was inspired to infuse some of his heritage into the story by using Africa as a backdrop.

“We do what’s kind of naturally in us and the African part is a big part of me and having the North American part…it was just a natural way to tell the story.”

Adetuyi said because he had done so many dramas and “heavy stories” that he decided to dabble in comedy. Love Jacked is his first comedic film.

“It’s a new experience. It’s a learning experience at the same time.”

He says the movie lends different lenses through which black stories can be told.

“I want them to understand we as African Americans we have diverse stories to tell. Humorous stories, drama stories, I think for a while we were getting the same kind of stories.”