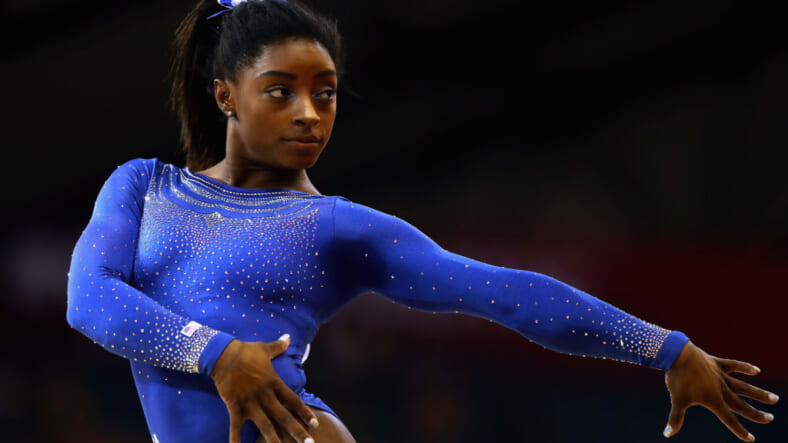 Despite hospitalization for a kidney stone just a day before the world gymnastics championship in Doha, Simone Biles was dominant in qualifying, showing the world why she is the reigning Olympic champion.

Biles posted the top all-around score of 60.965 during the early portions of qualifying on Saturday, after she left the hospital without passing the kidney stone she has dubbed the “Doha pearl,” according to The Guardian.

“We had to go to the ER, because I’ve been having stomach pains on my right side for two days,” Biles said in a video posted online by USA Gymnastics. “We started to think it was my appendix, so we wanted to go as a precaution. We got tests done and they found a kidney stone. I’m in a bit of pain [today], so adrenaline helps.”

Biles scored higher than anyone on the beam, vault and floor, and was second on uneven bars through five of 11 qualifying groups. Her performance also secured the USA’s place in the team final – which is more than 12 points higher than second-placed Japan at the halfway stage in qualifying, The Guardian said.

We were pretty good,” Biles said. “We tried to stay focused just like in practice, because practices have been going really well. Hopefully we’ll go out there and kill it again [on Sunday].”

With an amazing opening vault, Biles stunned the Aspire Academy crowd in Qatar, completing a combination only previously been done in competition by men, according to The Guardian. Her score of 15.966 was the highest of the day on any event.

From her hospital bed on Friday, Biles tweeted like the champion she is, writing: “Nothing like a late night ER visit less than 24 hrs before world championships. This kidney stone can wait… doing it for my team!”

this kidney stone can wait…. ?? doing it for my team! ❤️ I’ll be gucci girls ! pic.twitter.com/rKkvuEQrKc

Biles, a 10-time world champion, won four Olympic gold medals at Rio 2016. She is expected to compete in five individual finals as well as the team final over the next seven days, as she seeks to grow her legend to 14 world championship medals.